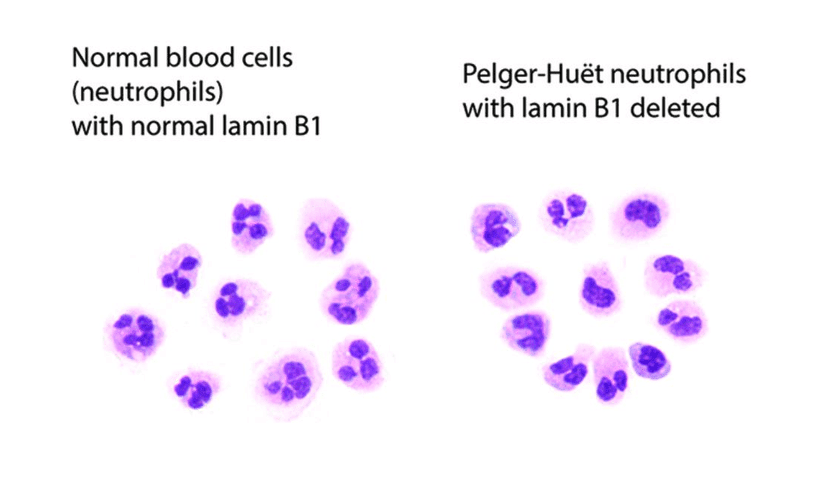 Scientists are starting to better understand why the control centers, or nuclei, of certain blood cancer cells have a distinctly odd shape.

New research has provided more clues on the origins and progression of these cancers, and could suggest ways to diagnose and treat certain leukemias at an earlier stage.

These squeezed-in-the-middle nuclei, which resemble pince-nez glasses, are called Pelger-Huët anomalies. Checking for this cellular aberration has long helped clinical labs diagnose leukemias and myelodysplastic syndrome, a disease of blood-forming cells in the bone marrow.

Although this structural change inside blood cells indicates possible cancer, until a recent study, no one knew what caused it to happen. In the journal CELL Stem Cell, cancer biologists report the discovery of the genetic mutation behind this cell abnormality.

“The primary diagnosis of many cancers, even in the era of genomic medicine, remains centered on the appearance of cells under a microscope.” says Sergei Doulatov, PhD, an associate professor of medicine in the Division of Hematology at the University of Washington School of Medicine In Seattle and the senior investigator on the recent gene study, a collaborative work among several institutions.

Pap smears are just one example of cancer screenings that look for irregularly shaped nuclei in a patient’s cells, he says.

One of Doulatov’s own research interest is in malignancies of infection-fighting white blood cells called neutrophils. He and his team wanted to get to the molecular root of these cancers. They assumed something was lurking in the genome of the more primitive progenitor, or stem cells, which go on to create blood cell lineages.

What determines the fate of these progenitor cells that causes the emergence of cancerous cells, rather than normal neutrophils? While they are still in their multipotent state and able to give rise to any one of a variety of blood cell categories, the progenitor cells for neutrophils, red blood cells or platelets are called myeloid cells.

Myeloid cells themselves can sometimes show abnormal, precancerous changes. The researchers of the recent study were able to cast suspicion on the loss of nuclear lamin B1, encoded on chromosome 5q. It is frequently deleted in cells examined from abnormally growing myeloid tissue. Evidence from this study suggests this loss is at fault in the misshapen nuclei.

“Lamins are proteins that line the inside of the nucleus, and are mutated in inherited disorders – famously progeria, the disorder of accelerated aging,” says Doulatov.

“We showed that loss of nuclear Lamin B1 induces defects in the nuclear morphology and in human hematopoietic [blood-forming] stem cells associated with malignancy,” the researchers noted.

His group went on to detail that lamin B1 deficiency alters genome organization. This in turn caused expansion of the blood-forming stem cells, a bias towards their becoming myeloids, genome instability due to defective DNA damage repair and other problems that set the stage for cancer.

They also showed that the abnormal nuclei in the cells of myeloid pre-cancerous growths in patients were associated with deletions in chromosome 5q that spanned the lamin1 B1 region.

Lamin B1 loss was both necessary and sufficient to cause the Pelger-Huët anomalies, according to the researchers. The scientists were also able to link this abnormal nuclear shape with  progenitor and blood-forming stem cell fate determination through the organization of the genome.

The study also implicates nuclear lamin B1 as a master regulator of cell fate specification in blood-forming stem cells, of genome integrity and nuclear morphology, according to the researchers.

“We show that lamin B1 deletion causes changes in stem cell function, nuclear shape, and leukemia progression,” says Doulatov. “Our research discovers lamin mutations in cancer and demonstrates that these mutations are responsible for the oddly shaped nuclei that have puzzled and helped pathologists recognize cancers over the past century.”

The latest genomic findings and their consequences for aberrant transformations in blood-forming cells may be important in the future of leukemia care. The presence of these changes, the researchers said, may be an early cancer biomarker, whose detection could permit for earlier diagnosis and treatment of leukemias.

In addition to the UW School of Medicine, other institutions involved in this study were the Fred Hutchinson Cancer Research Center, Carnegie Mellon University and University of California Irvine. Doulatov is an investigator at the UW Medicine Institute for Stem Cell and Regenerative Medicine.

Featured image: A comparison of normal neutrophils on the left, with blood cells with Pelger-Huët anomalies on the right. Photo: Sergei Doulatov Lab 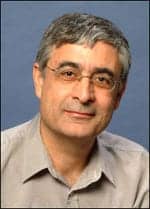 Problematic Commercial Lab Kits May Be Thwarting the Fight Against Cancer 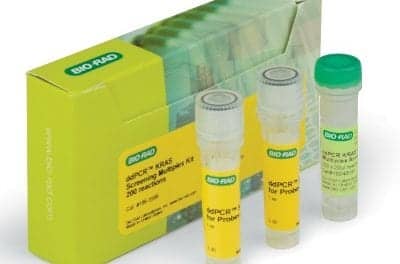