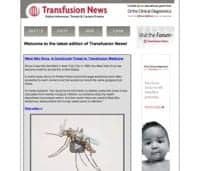 Since it was first identified in New York City in 1999, the West Nile Virus has become endemic across the United States, causing an estimated 780,000 illnesses, more than 16,000 documented neuroinvasive cases, and more than 1,500 deaths, according to Transfusion News.

Haley says the study found that there is a statistic called the vector index, which can predict West Nile epidemics before the human cases draw attention.

Since 2003, the US blood supply has been routinely screened for West Nile virus, so transfusion-associated infections are rare.

Click here to view a video and for more information.

University of the Sciences Holds Panel Discussion on Personalized Medicine