QIAGEN has announced the official launch of its next-generation CE-labelled assay for KRAS testing in colorectal cancer patients. In addition, the company gave an update on the pipeline of its regulated assay portfolio for personalized cancer treatment based upon the Pyrosequencing technology.

As evidenced by the significant expansion of its portfolio in this area, the company intends to provide its customers a broad portfolio of fully CE-marked sample-to-result technologies for tumor mutation profiling for various cancers. QIAGEN believes that these solutions will provide significant value to oncology diagnostics and to research.

QIAGEN is currently working on the further development of several new assays for personalized medicine including a new assay for mutations in the BRAF gene. This assay is already available in a research use format. Similar to KRAS status, mutations in the BRAF gene can contribute to the overall effectiveness of targeted therapies in oncology. The new assay will cover seven codons (gene regions) including codon 600 and codon 469 responsible for most of the known mutations. Additionally, the company is pursuing novel test panels that may enable stage specific prognosis, advance the clinical practice of personalized medicine and will ultimately help deliver safe, more effective treatment to cancer patients. The company plans to format the BRAF assay for regulated, in vitro diagnostic use.

The CE-marked KRAS test officially launched in May is an updated version of QIAGEN’s first Pyrosequencing-based assay for personalized cancer treatments. Pyrosequencing is a proprietary sequence-based detection and quantification technology which not only enables testing for known nucleic acid targets, but also covers yet undiscovered mutations of unknown sequence. Because such mutations can influence a patient’s response to treatments, their full coverage is a critical requirement for the adaptation of personalized treatment strategies. The advantages of QIAGEN’s KRAS kit over PCR-based testing methods have been demonstrated in many studies, so also in a recent clinical study submitted to European health authorities as part of the official validation process for the company’s assay. The study has uncovered high numbers of previously unknown mutations in codons of the KRAS gene not routinely covered by PCR-based tests.

"Pyrosequencing is a unique technology allowing detection and quantification of both known and unknown genetic mutations occurring in short stretches of genes. It thereby offers significant advantages over other technologies such as PCR, making it the premier choice for companion diagnostic assays which trigger the further evolution of personalized cancer treatment," commented Thomas Schweins, Vice President Marketing and Strategy at QIAGEN. "Therefore, we plan to use this technology to further expand our portfolio of regulated assays for mutation profiling in cancer treatments. Based upon a complete chain of CE-marked sample preparation and detection technologies such as the PyroMark Q24 MDx instrument, we aim to provide our customers a broad menu of regulated assays enabling the adaptation of more effective and efficient cancer therapies."

In addition to mutation profiling, QIAGEN is committed to the development of other assays for research use for analyzing expression profiles and methylation markers in signaling pathways targeted by cancer therapeutics. QIAGEN is active in several collaborations and partnerships with researchers and pharmaceutical companies advancing the new model of personalized medicine.

QIAGEN’s PyroMark KRAS Kit was validated on the bench top CE-IVD compliant PyroMark Q24 MDx system. The kit contains primers and controls for real-time, sequence-based detection and quantification of mutations in the KRAS codons 12, 13, and 61. The kit is compliant with EU IVD Directive 98/79/EC, enabling detection and quantification of mutations of the KRAS gene for in vitro diagnostics.

QIAGEN also produces and markets CE-IVD marked solutions for genomic DNA preparation from tissue and blood including the EZ1 Advanced Diagnostic Sample Technology instrument for high quality rapid purification of up to 12 samples in less than 25 minutes. The assay itself produces reliable results for 12 samples in just 20 minutes. These platforms are widely established and recognized as the solution of choice for clinical sample preparations in many laboratories worldwide.

Currently, researchers are already widely using QIAGEN solutions in the pursuit of personalized medicine. For assay detection, such solutions include QIAGEN’s PyroMark systems for quantitative sequence-based typing of known and unknown mutations as well as the Rotor-Gene® Q for HRM™ mutation screening and multiplex real-time PCR analysis. 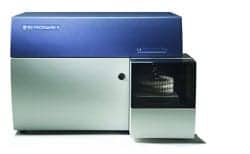