A Family Consents to a Medical Gift, 62 Years Later 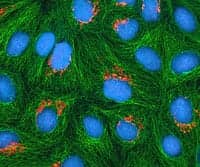 Multiphoton fluorescence image of cultured HeLa cells with a fluorescent protein targeted to the Golgi apparatus (orange), microtubules (green), and counterstained for DNA (cyan). NIH-funded work at the National Center for Microscopy and Imaging Research. Credit: Tom Deerinck (Photo courtesy NIH)The New York Times has published an article discussing the saga of Henrietta Lacks, who was 31 when she died of cervical cancer in 1951.

More specifically, the piece discusses the saga of Henrietta’s tumor cells, which were removed by physicians shortly before she died, and kept in a lab.

These cells, called HeLa cells, were subsequently shared with researchers worldwide and have been the focus of more than 74,000 studies.

Of note is that Henrietta did not give consent for her cells to be studied. And in the intervening 62 years, her family was also shut out of decisions pertaining to the research, and did not share in any profits flowing from discoveries that followed the research.

In the past 4 months, the National Institutes of Health has reached an agreement with the Lacks family, giving them control over how Henrietta’s genome is used.

Henrietta’s story has become a microcosm of a bigger issue, which is the absence of policies to regulate the pluses of studying genomes with risks affecting the privacy of those whose genomes are under study, and their families.

In an upcoming issue of the journal Nature, [removed]scientists from the University of Washington have described the HeLa genome[/removed], which they’ve recently sequenced.

JS Genetics Launches Test for the Diagnosis of Klinefelter Syndrome