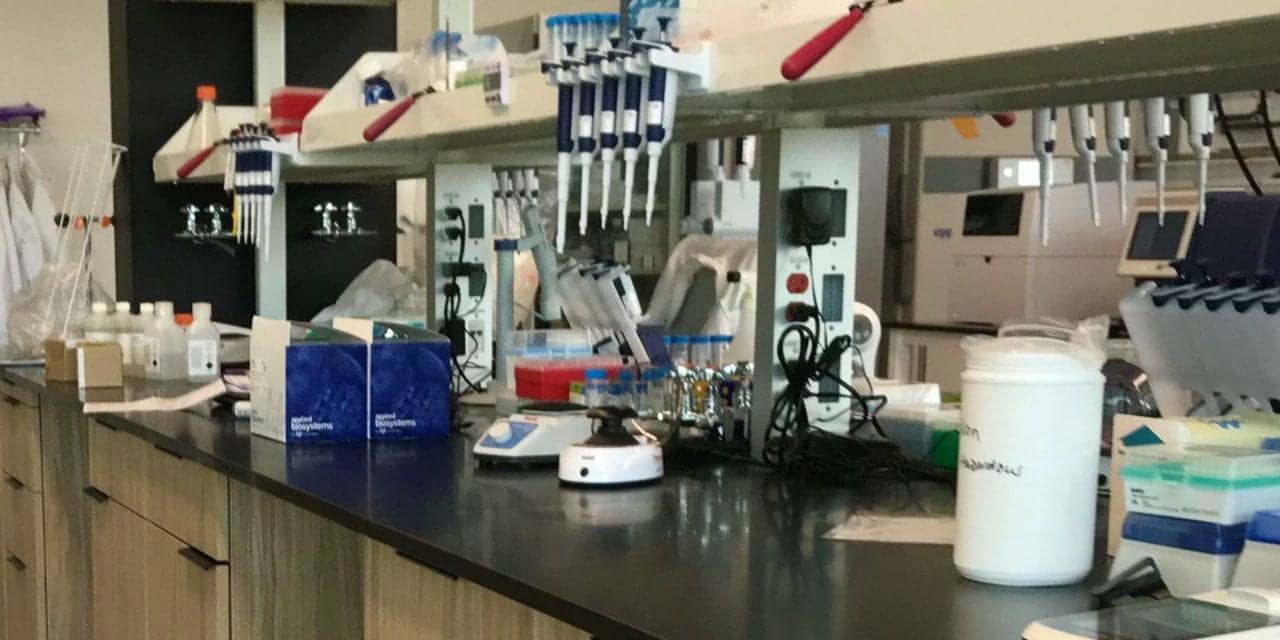 When assessing the status of a patient who presents with a solid tumor, the primary method used to form a definitive diagnosis of cancer is a tissue biopsy. Among patients who are asymptomatic or have early-stage disease, however, performing a tissue biopsy to diagnose cancer is typically not practical—and sometimes not even possible.

Over the past 2 decades, noninvasive techniques have been developed to permit the characterization of solid tumors through proximal analysis of blood. Collectively termed ‘liquid biopsies,’ these increasingly popular approaches make it possible to profile a tumor by analyzing dynamic and temporal genomewide signals derived from the tumor through circulating cell-free DNA (cfDNA) or cells from whole blood, eliminating the need to obtain tumor tissue.

Liquid biopsy methods are not yet sensitive enough to be used for cancer screening, which remains an open area for scientific and technology development. Nevertheless, the analysis of cfDNA has revolutionized cancer treatment and prognosis by making it possible to noninvasively detect tumor-derived mutations and genetic copy number variants—conditions whose presence can influence decisions about a patient’s clinical care.

Epigenomic analysis of tumor cells has yielded important data about specific changes that can occur during transcription and gene regulation. Specifically, DNA modifications such as cytosine methylation appear to change in novel and detectable ways as a result of malignancy, raising the possibility that such epigenomic changes may persist and also be detectable in cfDNA.

Through the detection of 5-hydroxymethylation signatures in cfDNA, it has recently been shown that dynamic changes in the cytosine methylation pathway discriminate among clinical cancer states in breast malignancies and pancreatic cancer.1,2

The liquid biopsy technology used for these analyses has the potential to become an instrumental noninvasive screening tool for solid tumors that currently lack diagnostic screening tools, such as lung and pancreatic cancers. 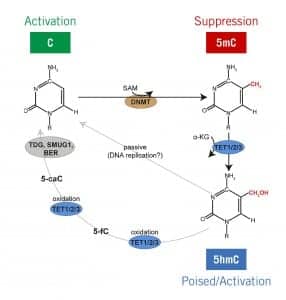 Similar to DNA methylation, DNA hydroxymethylation is an epigenetic mechanism that modifies a methylated cytosine by adding a hydroxymethyl (5hmC) group via catalysis by the ten-eleven translocation (TET) family dioxygenases (Figure 1). It is an intermediate step in the process of active demethylation, and it has been shown to be enriched in genes that are either poised to be or are actively being transcribed.

Our team developed a detection methodology for 5hmC in cfDNA that is sensitive, rapid, and reliable. It is based on click chemistry coupled with DNA sequencing of enriched 5hmC fragments.3 The output from the 5hmC assay is then coupled with machine-learning approaches to discover functional regions that enable powerful discrimination between cancer and noncancer subjects.

Our team conducted a pilot study to test the ability of the 5hmC assay’s signal to provide discriminating features that would permit the identification and classification of cancer patients. The study enrolled a total of 180 controls and 188 cancer patients (48 breast cancer, 55 lung cancer, 53 pancreatic cancer, 32 prostate cancer), where more than 60% of the patients had early-stage disease (stage I or II).

Each of the study’s datasets was constructed by including age-matched patient samples (and gender-matched samples for breast and prostate cancers) with a cancer-to-control ratio of 1:1. Our laboratory’s 5hmC assay was then used to analyze the plasma of each patient for cfDNA, which was subsequently sequenced (Figure 2).

Machine-learning methods were used to discover hydroxymethylated genomic materials that would make it possible to distinguish and classify cancer and noncancer samples. Our approach showed that the technique of elastic net regularized logistic regression was able to generate predictive models that would identify specific 5hmC features to discriminate individually breast, lung, pancreas, and prostate cancer patients from noncancer subjects.

Our team assessed the performance of the predictive models—defining how well they classified cancer and noncancer patients—by holding out a number of patient samples for subsequent evaluation of the algorithm’s sensitivity and specificity. The quality of the algorithm’s classifications was measured by the graphed area under the curve (AUC) and was highest for pancreatic cancer at 0.95 (Figure 3). Performance quality for breast cancer had an AUC of 0.89; for lung cancer an AUC of 0.84; and for prostate cancer an AUC of 0.83.

Figure 3. ROC curves depicting performance of individual cancers. Sensitivity is the true-positive rate, and 1–specificity is the false-positive rate. Note high AUCs for all cancer types.

The 5hmC detection methodology is a powerful tool for identifying and classifying cancers versus noncancer subjects. It has also been proven capable of identifying relevant cancer biology pathways. By inspecting genes called out by the type-specific predictive models for various cancers, our team identified several biologically relevant pathways specific to breast, lung, pancreatic, and prostate cancers.

In breast cancer, 5hmC predictive genes were enriched in the BRCA1 network, in hypoxia-signaling genes, and in early estrogen response genes. These are all biological pathways that have been implicated in the risk or progression of breast cancer.

Similarly, in the pancreatic cancer model the Notch signaling pathway was significantly enriched. Studies have demonstrated that the Notch signaling pathway regulates a variety of cellular processes, including apoptosis, cell-cycle progression, cell proliferation, differentiation, invasion, migration, and survival, all of which are related to cancer development and progression in pancreatic cancer. 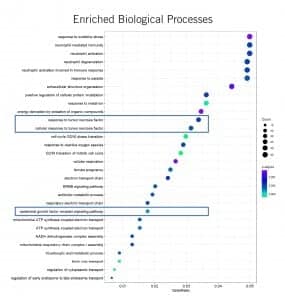 In the lung cancer model, predictive features were enriched in pathways relevant to the epidermal growth factor receptor (EGFR) and tumor necrosis factor (TNF; Figure. 4). EGFR and its family members are the major contributors to a complex signaling cascade that modulates the adhesion, differentiation, growth, migration, signaling, and survival of cancer cells. Due to their roles in the progression of cancer, EGFR and its family members have become attractive candidates for anticancer therapies. In particular, the abnormal activity of EGFR has been shown to play a key role in the development and growth of tumor cells, where it is involved in numerous cellular responses, including apoptosis and proliferation.

Alteration of TNF pathways is also associated with lung cancer aggressiveness. TNF is a major mediator of inflammation-induced cancer, and has been found to increase rapidly in response to drug-induced EGFR inhibition.4

Our team also undertook a pilot study to evaluate whether hydroxymethyl cytosine-based profiles from cfDNA might be employed to discover genes and genomic loci capable of being used as biomarkers for the detection of breast, lung, pancreatic, or prostate cancer. The predictive genes examined by our study were those involved in such known cancer pathways as BRCA and hypoxia-signaling genes in breast cancer, EGFR and TNF in lung cancer, and Notch in pancreatic cancer.

For breast cancer, our study identified a set of predictive genes that performed well at distinguishing cancer from controls, with an AUC of 0.89. High probability scores from the gene-based breast cancer prediction model were associated with tumor size 2,5 However, the results of our studies show that 5hmC in the cfDNA from plasma undergoes more nuanced changes—including both increases and decreases—that bear the molecular hallmarks of breast cancer.

As evidenced by the genes that contributed to the breast cancer prediction model, several cancer-specific pathways were enriched in the model. The enriched group included the hypoxia-signaling pathway, whose activity changes the cellular environment and in breast cancerClick or tap here to enter text. is associated with poor prognosis.6 In support of this finding, hypoxia has been shown to control methylation through TET1/3 deregulationClick or tap here to enter text., the result of which would be altered 5hmC patterns.7

The lung cancer classification, with an AUC of 0.84, was identified by genes enriched in the EGFR signaling pathway. Activation of this pathway is known to be a key driver of lung cancer progression, making it one of the most important targets for lung cancer treatment.

Investigation of the pathways enriched in the pancreatic cancer model identified the Notch signaling pathway, which has been shown to play critical roles in the development and progression of pancreatic cancer.8

When coupled with machine-learning approaches, the profiling of 5hmC signals in cfDNA offers a promising strategy for detecting and classifying cancers versus noncancer subjects. Given that changes in hydroxymethylation occur across a variety of cancers and are found in early- as well as late-stage disease, this strategy lends itself well to single-analyte, multiple-cancer early detection tools. Developing the strategy for implementation in clinical settings represents a great opportunity to improve the detection and classification of several cancers with existing screening methods (breast, lung, prostate) as well as malignancies without screening methods (pancreatic).

Anna Bergamaschi, PhD, is senior director for product development at Bluestar Genomics. She has an extensive background in cancer biology and cancer genomic methods for the development of molecular diagnostics, and she has been involved in numerous assay development projects.