Scientists at Queen Mary, University of London have developed tests which could revolutionise the detection of clostridium difficile and help cut the number of deaths in hospital wards from the superbug.

The tests, which are cheap, quick and sensitive, could lead to the routine screening of all surgery patients before they are admitted to hospital, reducing the chances of introducing the bug from outside.

C.difficileis responsible for about 8,000 deaths per year in the UK. It contributes to the death of four times more people than MRSA, and costs the NHS as much as £1bn per year.

The current tests for the superbug are either slow but reliable, or fast but unreliable. All are expensive, costing the NHS between £8 and £25 per patient.

The ingredients of the new test developed by Professor Stephen Bustin and funded by Bowel & Cancer Research cost just 50p per patient; and it takes only 45 minutes to get results, instead of two days.

Professor Bustin has been leading the research within the Bowel & Cancer Research laboratory at the Institute of Cell and Molecular Sciences, at Barts and the London School of Medicine and Dentistry.

His team is now applying for NHS funding to introduce routine testing of all surgery patients before they enter the colorectal unit of The Royal London Hospital in Whitechapel. It would be the first hospital in the UK to do so.

“Because the test is so quick, it won’t delay admissions. It will also give us a clearer idea of how much C.difficile is out there – at the moment nobody really knows,” said Professor Bustin.

“C.difficile is one of the great killers in our hospitals,” he added. “It’s responsible for more than 8,000 unnecessary deaths a year.

“It’s nonsense that the death rate should continue at the current levels when there is no need.”

He is confident that the research could ultimately provide every hospital in the UK with a C.difficile test that would be quick and easy to administer by non-specialist staff, saving thousands of lives, and millions in NHS cash.

C.difficileis mostly spread through the hands of hospital staff. Unlike MRSA it is more difficult to eradicate through hospital hygiene programmes alone because it produces spores that can remain in the environment for months.

Successful treatment requires rapid medical intervention, the first step of which is to confirm the presence of the infection.
“One of the biggest difficulties is reliable detection of the C.difficile bacterium,” said Professor Bustin. “There is an urgent need for a diagnostic test which combines speed with sensitivity and low costs.”

The most reliable diagnostic tests currently available involve growing the bacterium from a stool sample for 48 hours or more, by which time the infection has often spread to other patients. Confirmation of the presence of bacterial toxin takes another 48 hours.

The test most commonly used in NHS hospitals is faster and involves detecting bacterial toxins in stool samples. However, a recent systematic review of these tests published in The Lancet concludes that none of the tests currently available can reliably detect C.difficile toxin.

The most recent tests use another molecular technique called ‘Polymerase Chain Reaction’ (PCR) which is extremely rapid and sensitive, with the potential to detect a single bacterium.

While easy-to-use commercial tests that detect C.difficile are available, they are expensive at around £20-£25 per assay and require dedicated instrumentation.

The Bowel & Cancer Research team’s tests use PCR technology, taking advantage of the technique’s speed and sensitivity. However, their assay costs only a fraction of the commercial tests, thus opening up the possibility of screening every surgery patient for the presence of C. difficile before they enter hospital.

Professor Bustin explained:  “We have developed an easy, cheap and rapid protocol for preparing a test sample from stool. This is added to a test tube that contains reagents for the assay. One hour later we get the results.

“To date we have developed three individual assays that can detect single copies of C.difficile. These assays take less than 45 minutes, and reagent cost is around 50p per assay. The assays detect both the bacterium and the DNA that is responsible for its virulence.

“We have applied the assays to patient stool samples and have been able to detect the presence of C.difficile in a number of patients where conventional assays reported a negative result.” 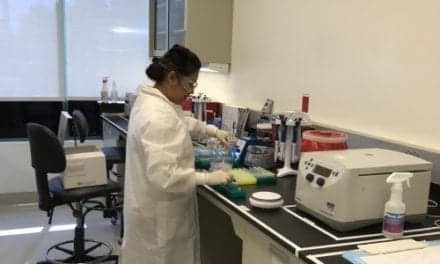