Testing for drug abuse is vital in emergency departments, where physicians have to quickly determine what drugs might be in a patient’s system; in criminal cases; and in the workplace. And although urine and blood have traditionally been the test matrices of choice, new matrices such as sweat, saliva, and hair may open new (and less intrusive) possibilities for drugs-of-abuse testing.

How big a problem is drug abuse? According to a National Institute of Drug Abuse estimate, in 2002 illegal drug use cost America close to $181 billion, including:

Mayra Vazquez, marketing manager, Reagent Initiatives, Abbott Laboratories, believes drugs-of-abuse testing represents an estimated $200 million market in the United States alone, and $300 million globally. For Abbott, the market mainly lies in clinical testing and work screening, although the firm is also involved in criminal justice testing, says David Armbruster, scientific affairs manager. When someone goes to a lab, physician’s office or emergency department with signs of intoxication, a panel of tests is ordered to determine what substance is present so the proper treatment can be selected, Vazquez says. These tests are merely looking for positive or negative results—that is, whether or not an illegal drug is present, not how much. In workplace testing, the aim is the same—to identify job candidates or current employees who are abusing substances.

But in many cases, testers need more than a positive or negative. For example, Vazquez notes, rehab clinics require more rigorous testing to determine the quantity of drugs in a patient’s system. And while hospital labs perform tests for emergency-department patients, reference labs typically perform workplace testing, says Armbruster.

Abbott manufactures drug tests and instruments of all kinds, including those to monitor therapeutic drugs. Abbott introduced 10 assays on a new platform last year. The ARCHITECT processes emergency samples simultaneously with routine samples, and its wide menu includes drugs of abuse as well as other immunoassay and chemistry tests. Abbott’s Kelley Carville, product manager, Clinical Chemistry Specialty Reagents, says that such consolidation allows an emergency department to run a pregnancy test and a drugs-of-abuse test on a woman at the same time using one system and one operator—which is more cost efficient than using two different systems. And ARCHITECT processes STAT results quickly, another vital feature for an emergency department.

The ARCHITECT drugs-of-abuse panel includes amphetamines/methamphetamines, cocaine, PCP, barbiturates, benzodiazepines, propoxyphene, marijuana, methadone, ethanol, and opiates. By the end of the year, says Vazquez, applications will be added to provide semiquanitative assays, first in Europe, then in the United States—in addition to the qualitative, positive/negative results now offered. Also, assays for trendier drugs, such as Ecstasy (MDMA), will be introduced this year, while assays for opiate narcotics, such as Oxycontin, are in development. This will satisfy the needs of reference labs, which look to monitor the levels of drugs in patients. Carville adds that this will give hospitals more product offerings because many have their own reference labs, thus giving them an additional revenue stream.

Vazquez says Abbott’s assays still typically examine urine and blood, and not such alternative matrices as saliva, hair, and sweat.

In addition to hospitals, Abbott works with law enforcement and corrections agencies that test probationers for drugs, Armbruster says. Additionally, some states have drug courts that conduct random testing and screening of probationers, says Carville.

Armbruster says it is often necessary to have multiple cutoffs depending on the test. “Drug abuse screening attempts to find those patients with real problems, like heroin users, not false positives, which can sometimes be obtained when such things as poppy seeds are in the system. With multiple cutoff values, this same test could be used in hospital labs, enabling them to better understand a patient’s medical condition.”

He describes Abbott’s products as immunoassays that contain antibodies that bind to drugs of abuse. These assays are good for screening and obtaining positive or negative results. But to quantify results, the samples must be sent on for a confirmatory test. At the other end of the spectrum, some companies are offering off-the-shelf self-testing kits for home use, notes Vazquez. One company, WayPoint Biomedical Inc, has a product called The Drink Detective, a rapid test to determine whether a drink has been spiked.

Web-based Management for Drug Abuse Testing
In another aspect of testing, Sageful Corp recently announced TrackMyResults, a Web-based service for clinical labs that do drugs-of-abuse testing. According to Leila Dillon, vice president of marketing, the service enables labs and third-party administrators to offer customers Web-based results, reports, and full drugs-of-abuse testing program management (such as scheduling and tracking). Three labs have already signed on to resell this service to their customers.

Sageful’s CEO, Keith Loris, explains that his company has been selling sophisticated Windows-based software to large drugs-of-abuse testers for many years, and saw a tremendous need for equivalent functionality in an online, pay-as-you-go format. TrackMyResults facilitates collections and shipping, captures chain-of-custody data, delivers results online, provides powerful analytic and return-on-investment reports, and enables secure, confidential communications between labs and customers. The end result is that organizations can more effectively manage their drugs-of-abuse testing programs to save money and improve outcomes, Loris says. The service requires a modest annual subscription fee and per-sample charge. Loris says this is a turnkey service: Sageful provides the hosted Web site, which integrates with any Laboratory Information Management System, and all a customer needs is a browser. No software has to be installed, nor must a management information system be involved. “Lab customers get a drug-testing data-management system that is easy to get up and running quickly, and they only have to pay for what they use,” he says.

Dillon adds that TrackMyResults was created specifically for laboratories and third-party administrators that offer drugs-of-abuse testing services. Laboratories are the target market for this online pay-as-you-go service.

As for costs, Gates says it differs from lab to lab, depending on the volume of testing done by each. Loris says Sageful is considering giving the service to clients and charging a per-specimen fee.

Biochip Testing
Randox Laboratories Ltd’s evidence™ is a biochip reader designed for use in clinical applications along with the smaller scale investigator™ for research purposes.

According to Randox Research & Development Team Leader Mark Piper, the analyzer is capable of testing a whole range of medical diagnostic assays, but is ideally suited for drugs-of-abuse testing because of the large number of samples it tests. The work is done from panels. In about 1 hour, the first batch of 90 results is obtained, and another 90 results are produced every 4 minutes after that. The device is widely used in Europe, India, the Far East, and Mexico, Piper says, and recently received Food and Drug Administration approval for the United States. It’s already been trialed at a Veterans Affairs hospital in Dallas.

“Evidence” uses a biochip as a reactive platform. It has multiple specific ligands attached at predetermined sites on the surface. Currently, up to 23 test regions can be pre-fabricated onto the biochip surface, but in the future, the capacity can be increased dramatically.

Piper says the device is clearly useful for forensic and toxicology labs, but it also has potential for insurance and workplace testing. The degree of expertise and licensing requirements needed for lab workers to use the device varies from country to country, says Piper. Naturally, for criminal applications, a tighter degree of control for access to samples is needed.

“There’s a whole range of different panels available to customers,” he says. The same reagent and sample can be used for many results, because the assay is done on one chip. The customer can select which tests he wants, and only pays for what he uses. But later, additional results can be obtained without any need for retesting.

“The majority of our control products for drugs-of-abuse testing are manufactured in a urine matrix. We have a few products in a whole blood matrix, and a few in a serum matrix, but urine is far and away the matrix of choice for this type of testing. Most of the time, forensic labs have an established cutoff (Substance Abuse and Mental Health Services Administration (SAMHSA) or otherwise) and are simply looking for a positive or negative result. Screening urine samples is quick, easy, and cost efficient.

“The issue with urine is that it is invasive and fairly easy to adulterate, substitute, and/or dilute. This is why SAMHSA has proposed adding three new matrices to the Federal Workplace Drug Testing Program: hair, sweat, and oral fluid. We did some research and talked to some of our customers and found that there was a lot of interest in drugs-of-abuse testing in a saliva matrix, so we developed artificial saliva controls. We decided to start with two product lines: one line of saliva controls will be for use with screen testing, and the other line of saliva controls will be for use with confirmation testing,” Plutchak says.

Plutchak believes that drugs-of-abuse testing in alternative matrices, particularly the oral fluid matrix, will become more popular. “SAMHSA needs to settle a few issues regarding collection devices for oral fluid specimens before its proposed rule will be ratified, but the advantages are undeniable. Oral fluid collection is less invasive and easy, and the specimens are more difficult to adulterate. Private employers, schools, and insurance companies already see the advantages of oral fluid testing, because there are a few reference labs in our field that are processing as many as 1,000 oral fluid samples a day.”

Plutchak says less-invasive saliva testing is popular in workplace testing because it is better suited for new and current employee testing. SAMHSA has developed cutoffs for saliva testing that may be approved by the end of this year, he says. Other alternative matrices include hair and sweat. “The only problem with these is figuring out cutoffs, because drug concentrations in saliva will be lower after metabolization and can take more time to confirm. This is less important in the private sector; but in criminal cases, it has to be more accurate,” he says.

Another problem with saliva testing is that the collectors used to capture the specimens from oral fluids can give a high reading. Ideally, a collection device is needed that can capture “neat” saliva; but lacking that, it may be left up to labs to deal with this problem. This is still unresolved, Plutchak says.

Saliva testing’s future all depends on regulations regarding saliva. Plutchak says these regulations have been under discussion for 10 years. Already, about 6,000 samples of saliva are being tested daily, but that pales in comparison with the 150,000 urine tests done daily in the United States.

Gates says it is important that tests be verifiable, particularly in criminal cases. Labs have to be prepared to go into court with results, and he feels that hair, saliva, and sweat matrices are still too new. SAMSHA is examining these areas closely, he says.

Whatever dominant matrix emerges, Abbott’s Vazquez says that as large as the drugs-of-abuse testing industry is, it will continue to grow—“as long as there are drugs out there to abuse.”

Lab Quality Confab is Heading to the Big Easy 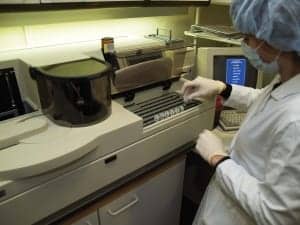