Okayama University researchers have reported that terahertz radiation can be used to rapidly detect markers for breast cancer cells.1 In a recent publication, the investigators presented a technique that makes use of the binding properties of aptamers, synthetic organic molecules acting as probes for cancer cells.

While mammography through x-ray screening is the standard detection technique for breast cancer, the technique is not without risk, as it involves exposing the patient to ionizing radiation. Another approach for detecting breast cancer cells is based on the use of terahertz (THz) radiation, which is sensitive to polar molecules such as those of water. The technique has potential for diagnostic applications because the water content of cancer tissues differs from that of normal tissues.

Together with their research colleagues, Toshihiko Kiwa, PhD, an associate professor of engineering at Okayama University, and Tsuneyuki Ozaki, PhD, a professor at the Institut National de la Recherche Scientifique of the University of Quebec, have now discovered a way to increase the sensitivity of THz radiation for the detection of markers of breast cancer cells, suggesting that ‘THz chemical microscopy’ could become a powerful alternative screening technique.

The key principle underlying the method is that cancerous breast cells bind to certain molecules known as aptamers, whereas normal breast cells do not. Aptamers are short DNA or RNA molecules, or molecules built from peptides, that can bind to specific molecules. In their study, Kiwa and colleagues explored the binding properties of two aptamers, mammaglobin B1 (MAMB1) and mammaglobin A2 (MAMA2). These aptamers bind to proteins (mammaglobin B and mammaglobin A, respectively) that are overexpressed in typical breast cancer cells. Attached to a specially engineered sensing plate, freestanding aptamers display a response to THz radiation that differs from the response of aptamers bound to cancer cells. This difference can be used to distinguish a tissue sample with breast cancer cells from a sample with only normal cells.

Kiwa and his team found that MAMB1 and MAMA2 aptamers consisting of single-stranded DNA or RNA fragments have a high affinity for particular molecules, and those molecules were found in breast cancer cells.

The researchers’ experimental setup involved a sensing plate consisting of a sapphire substrate, and silicon and silicon dioxide thin films. The aptamers were fixed to the top layer. Irradiating the plate with a specific laser created charge carriers, the motion of which generated electromagnetic radiation in the THz range.

The researchers observed that the detection method is highly sensitive: the ‘limit of detection’ was found to be as low as 1 cancer cell in 0.1 mL of sample. Moreover, a qualitative assessment of a sample seems possible, as the change in THz signal can be associated with the number of cancer cells per aptamer. Although further investigation of the latter association is needed, Kiwa and colleagues concluded that “the results obtained from this study can be the spark of new evolution in the detection of breast cancer.” 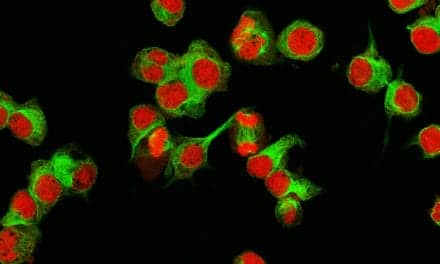 Presence of Protein Important Clue to Tumor Regression in Neuroblastoma

Study: Assay Can Detect Cancer Relapse up to 2 Years Earlier than Imaging 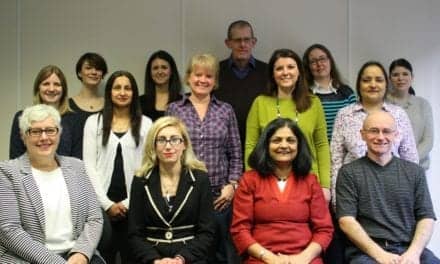