Therapeutic drug monitoring (TDM) is a segment of the clinical chemistry market that is often spoken about in the same breath as drugs of abuse and toxicology testing. However, the difference, of course, is that drugs of abuse and toxicology tests measure “bad stuff” in the body, while therapeutic drug monitoring gauges serum/plasma drug levels to ensure the proper therapeutic effect. Although many drugs don’t need to be monitored, those with a narrow therapeutic range or wide variations in metabolic uptake are important to watch. Among the types of commonly monitored therapeutic drugs are: antibiotics; anti-asthmatics; anti-convulsants; anti-psychotics/depressants; anti-arrhythmics; and transplant (immunosuppressing) drugs.

Most TDM tests are ordered STAT, so it’s no surprise that 84 percent of all requests are performed in hospital labs, according to a 1999 market analysis by Dade Behring. “The doctor needs to know right away if, for some reason, the drug is building up and becoming toxic to a patient or within the therapeutic range,” said Marjorie Betz, clinical chemistry marketing manager at Beckman Coulter (Fullerton, Calif.).

Unlike drugs of abuse testing, therapeutic drug monitoring does not appear to be heading toward a point-of-care platform. Why not? Most likely the higher cost of point-of-care testing plays a role. Also, a STAT TDM is usually not as urgent as a cardiac marker or critical care analyte.

The 1990s were not kind to TDM testing or to most of the immunoassay market. (Still not as brutal as reimbursement erosion on chemistry panels, but no picnic.) While the U.S. economy boomed, TDMs gradually migrated from specialized immuno-chemistry analyzers to high-volume chemistry systems, making them more of a commodity.

This trend was prompted by laboratorians’ demand for a single platform, or at the least one user interface, to run most tests. With lab floor space and trained technologists at a premium, workstation consolidation became a priority. Sample splitting was another driver. However, it also is a priority for laboratorians to provide fast turnaround time on TDMs for clinicians. These competing interests mean that TDMs can sometimes be found running on chemistry analyzers and sometimes on immunochemistry systems. It all depends on a lab’s test volumes, workflow and the urgency of clinician demands for STAT TDMs.

Current market estimates (Information Dynamics) have about 32 percent of TDM tests running on chemistry systems, while 67 percent run on random access immunoassay analyzers. Manual methods account for the remaining 1 percent. The figures are in dispute by Abbott and to a lesser degree, Bayer, both of which accommodate the bulk of their TDM tests on immunoassay analyzers. “Our studies show that the actual percentage of TDM requests with a clinical chemistry profile is less than 5 percent,” according to Gilbert Mejia, Abbott Diagnostic’s (Abbott Park, Ill.) product manager for TDMs, abused drugs and thyroid testing. A Bayer Diagnostics (Tarrytown, N.Y.) spokesperson noted that the chemistry market for TDMs appears to be declining slightly while the immunochemistry market appears to be gaining moderately.

On the other hand, Dade Behring which performs nine of the top 10 TDMs on its chemistry analyzer, sees the trend as shifting the other way. Their customers say they expect a decrease in TDMs due to less frequent testing of chronic in-patients and fewer tests per patient in general. Despite this, the company has actually seen the number of TDM tests slightly increase since 1995.

“We’re seeing TDM testing migrating from dedicated immunoassay analyzers over to general chemistry analyzers,” said Suzanne Carrillo, director of marketing, Dimension RxL, at Dade Behring (Deerfield, Ill.). “Customers are telling us they want to run TDMs at the same time as their general chemistry tests without sample splitting. They’re also telling us that most of these requests are STAT in-patient tests that cannot be batched due to the need for fast turnaround time. As a result of these needs, we’re seeing our TDM usage at our existing customer base increasing. Other factors considered in the selection of TDM platform include accuracy, cost and platform standardization.”

Dade Behring, Beckman Coulter and Roche Diagnostics (Indianapolis) have all adopted a workstation consolidation strategy which entails adding as many TDMs as possible to their chemistry platforms as quickly as possible. It will be interesting to see how the market responds.

Since more than half the 2,000 laboratories surveyed in a 1999 Information Dynamics study used an Abbott analyzer to perform TDM

testing, chemistry systems have their work cut out for them. It appears for now that the fast turnaround time on results, made possible by a dedicated analyzer, is preferable to workstation consolidation.

Worldwide TDM testing comprises a $260 million business and the bulk of that amount, $160 million, is performed in the United States, according to David Swartz, senior product manager at Bayer Diagnostics. “Sometimes it’s a matter of drugs simply not being monitored, and sometimes it’s cost,” Swartz said. “European countries won’t reimburse at immunoassay cost levels, so it tends to drive down the demand for therapeutic drug monitoring assays.”

Figures on the U.S. portion of the TDM market range from $106 million (Dade Behring) to Merrill Lynch’s 1999 market analysis which pegs it at a whopping $241 million with an estimated average growth rate from 2000 to 2005 of 3.3 percent.

U.S. reimbursement levels for TDMs have remained fairly steady. While the assays comprise only 8 percent of all requested chemistry tests, they represent 22 percent of the dollar volume. This is bolstered by the development of TDMs for new drugs such as those that suppress the immune system for transplant patients. These single-source, proprietary immunosuppressing assays are performed at medical centers with transplant programs and specialty labs, but they make up in price what they lack in volume. Some of these, available primarily from commercial labs, command as much as $130 per test.

While the anti-depressant and anti-psychotic segment of therapeutic drug monitoring has dropped off precipitously with the recent development and introduction of safer drugs, most believe that the worst years for immunoassay testing are behind it. Much of the migration of homogenous assays from immunoassay to chemistry systems has already occurred. The market for more targeted cardiac markers and drugs seems insatiable, while advances in genomics may one day make the transplantation of organs, tissues and re-configured genetic material an outpatient procedure. With the right drugs and diagnostics, it’s possible. 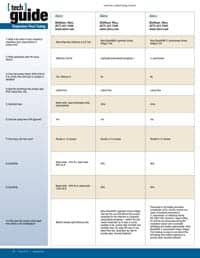