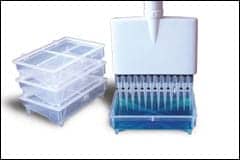 Excel Scientific, Wrightwood, Calif, has announced that the Texan Reagent Reservoir is available for immediate delivery. The basic design of the Texan’s large V-shaped basin is compatible with both eight-channel and twelve-channel multiwell pipettors. Improvements include volume graduations that are extended to 150 mL, a more rigid base that avoids spills by not wobbling, an easy-open latch that can be manipulated with one hand, and increased clarity for reagent visibility. Texan reservoirs are available sterile or nonsterile, with or without the hinged protective cover.

Carolina Liquid Chemistries, Brea, Calif, is known for 10 years of experience in providing a complete line of bar-coded, reagents for use on Beckman Synchron instruments. The company has expanded its product line by introducing a line of pre-filled, liquid ready-to-use, bar-coded reagents for use on Olympus Chemistry Analyzers AU400, AU640, AU2700 and AU5400 with 30-day on-board stability.

The Carolina Olympus reagents are bar-coded to allow use of within-lot calibration, tracking reagent position, tracking expiration dates, and lot numbers. Carolina offers a menu of 60 reagents, including drugs of abuse. Oxycodone is available. Features and benefits of the Carolina product include: a CO2 with 14-day calibration stability, enzymes that do not require daily blank, Denka-Seiken Lp(a), a single-channel HbA1C, and a lithium reagent. Also available is a complete line of multicalibrators and controls.

Meridian Bioscience Inc, Cincinnati, a manufacturer of microbiology and serology products, has announced the availability of ImmunoCard STAT. Cryptosporidium Giardia lamblia. The test is a rapid immunoassay for the qualitative detection of Cryptosporidium parvum–specific and Giardia lamblia–specific antigens in aqueous extracts of fecal specimens. It is intended for in vitro diagnostic use by professional laboratories as an aid in the detection of suspected infections. A simple 10-minute test format produces definitive results that are easily interpreted, and the results are simultaneously differentiated between two organisms with one assay test. 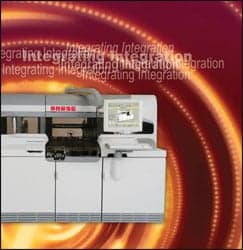