While laboratory and clinical professionals continue to debate the true value of point-of-care testing (POCT), major diagnostics and equipment suppliers are busy developing new and enhanced products for the segment.

Indications of growth in the POCT sector are everywhere. According to the American Association of Clinical Chemistry, POCT has become its largest segment, accounting for at least 20% of its total membership.

A 2002 Frost & Sullivan product data study revealed that 100% of blood glucose testing and more than 60% of coagulation testing is done with POC instruments. More than half of US hospitals have two to three POC installed applications, the report also noted. However, over the past 2 years, the blood gas analysis market has experienced very limited growth, says Mark Hughes, senior consultant at Enterprise Analysis Corporation, a Stamford, Conn–based consulting and research company that focuses on health issues.

“The traditional blood gas market, where traditional analyzers are sold to STAT labs or main labs, is essentially flat,” Hughes says. “But these are not true point-of-care instruments. On the POC side, there has been some continued growth. Much of the sales growth is attributable to the placement of instruments; sales of reagent cartridges have lagged somewhat.”

Definitions of what constitutes a POC device vary. Hughes says a device need not be handheld; it can be a small tabletop unit. “In our definition, a POC device is simple and easy enough to be used by nonlaboratory professionals with minimal training,” Hughes says.

He adds that hospitals face tradeoffs when they choose to move critical care testing to the bedside. POC yields faster results for the clinician, but from a laboratory perspective, that potentially means more work for the laboratory in overseeing management of the POC testing, he says.

Usually, the responsibility for administering quality control and proficiency testing for the POC program rests with the laboratory. On the clinical side, once clinicians and nurses begin to see the issues involved in point-of-care, such as performing quality control and regular proficiency testing, they sometimes begin to second-guess the wisdom of taking on POC testing, Hughes says.

Cost also remains a major issue for discussion. In the absence of convincing health economic data showing cost savings or better patient outcomes, there continues to be some reluctance to adopt such tests, Hughes says.

“The most important thing is producing outcome studies that show cost savings or reduced morbidity by using point-of-care testing,” he says.

A Different View
Donald G. Ross, MD, PhD, chief of the Pathology Department at Holy Family Hospital and Medical Center in Methuen, Mass, believes testing quality and reliability are much greater when testing is performed by dedicated laboratory professionals rather than assigned to an already-overworked nursing staff focused on other issues.

Testing is almost always more expensive when done at the bedside rather than in the central laboratory, he says. “It demands more than simply accepting the numbers that kick out of the instrument. We run into trouble when people don’t run the proper controls. I don’t want potassium measured at the bedside because they [clinicians] might screw it up and a patient can die,” Dr. Ross says.

Biosite
Eric Perreault, Biosite’s marketing director for the hospital segment, says his company’s Triage® line of products are used in a variety of settings, from critical care to off-site clinics. The Triage platform, with its rapid turnaround and overall clinical value, is most commonly used in emergency departments, he says.

Biosite’s Triage® line of products are used in a variety of settings.

Most popular now, Perreault says, is the Triage BNP Test, which advances diagnosis of congestive heart failure (CHF). The test provides results in 15 minutes at the patient’s bedside. Net sales of the Triage BNP Test increased $34.7 million from 2001 to 2002, and sales continued to rise this year.

The new Triage Stroke Panel, currently in the final stages of development, is important because strokes are often difficult to identify, and early diagnosis is critical to permit fast-tracking of patients for appropriate imaging (computed tomography) and determination of eligibility for stroke-specific care protocols and thrombolysis, Perreault says.

Since its launch in 1999, the Triage Cardiac Panel (for troponin I, creatine kinase MB, and myoglobin) has become the leading rapid whole-blood test for diagnosing myocardial infarction, Perreault says. The Triage Cardio ProfilER test uses all the analytes listed above and includes B-type natriuretic peptide (BNP) for the diagnosis of heart failure. Both products offer 15-minute turnarounds.

To gain sales in the future, Perreault says, will POC devices must be both easy to use and intuitive— to neutralize potential human error. And they must exhibit significant clinical value to the institution.

When the cost of a POC test is measured against that of the same test done in a laboratory, the laboratory cost is typically higher, Perreault says. “To understand the actual cost of a point-of-care test, an institution must look at the total cost.” Key areas, he says, are clinical benefits, operational benefits, and economic savings.

“The ability to route a patient in the proper direction from the emergency department, either to another unit in the hospital or [to the] home, leads to operational benefits, which ultimately result in economic savings for a hospital by reducing emergency department diversion and reducing patients’ length of stay,” notes Perreault.

i-STAT Corporation
i-STAT is a major provider of POC diagnostic systems for blood analysis. In January, i-STAT will resume sales and marketing responsibilities after a successful 5-year relationship with Abbott Laboratories. Joey Baugh, Abbott product manager for i-STAT, spent 6 years as a laboratorian before taking on management duties.

According to Baugh, POC is gaining popularity because doctors today simply can’t get test results quickly enough. “It’s all about turnaround time,” he says. “Getting the tests nearer the patient improves the level of patient care; that’s the essence of point of care.”

In September, i-STAT received FDA 510(k) clearance for its new 10-minute cardiac troponin I test. Due for initial shipment in November, the new test, the company says, is the first on the market to offer central laboratory–grade quality and performance at the patient’s bedside. Clinical trials indicate the new test is sensitive enough to identify even the slightest elevation. The American College of Cardiology’s suggested protocol calls for a troponin I measurement for patients with chest pain within 30 minutes of arrival at an emergency department.

The new test will enable hospitals to save money and eliminate unnecessary tests by rapidly identifying the 10% to 15% of patients who complain of chest pains but are not suffering a heart attack. Nearly seven of ten patients who show up at emergency rooms with chest pains cannot have their conditions properly diagnosed without a troponin I test or other cardiac marker tests.

“Technology has driven a lot of routine tests out of the lab and near the patient, where they really need to be,” Baugh says. “As advanced and reliable as the new POC instruments are, there’s no reason for clinicians to wait for long periods of time to receive lab-quality results.”

Nova Biomedical
Blood gas, electrolyte, and chemistry analyzers for use in critical care/POC applications have been an important market for Waltham, Mass–based Nova Biomedical since its founding in 1976.

The company’s Stat Profiler Critical Care Xpress (CCX) cart-mounted analyzers offer a comprehensive critical care profile with up to 19 measured tests, including those for ionized magnesium, blood urea nitrogen, and creatinine, with use of no more than 200 µL of whole blood. (For blood gas panels, just 50 µL is required.)

In addition to the comprehensive test menu, CCX offers onboard data management, touch-screen interfacing, and onboard cartridge-based quality control that eliminates many of the manual steps required with other analyzers. The Nova SmartCheck system simplifies maintenance.

“Bedside testing, near-patient testing, point-of-care testing—however you refer to it—is definitely on the rise,” Polishook says. “The NCCLS [National Committee for Clinical Laboratory Standards] has recently established a separate domain for POC testing and has recommended adoption of a number of standards.”

He says POC analyzers provide much faster turnaround time, and faster results can make the difference in treating patients in the operating room, intensive care unit, and emergency department. “We’re riding the POCT wave by making instruments that are easier to use and easier to maintain,” Polishook says.

Polishook says electronic connectivity is also a major issue Nova analyzers address. Connectivity allows electronic transfer of data from a POC device to the laboratory and to the laboratory information system (LIS) or hospital information system (HIS). “This keeps record-keeping within the hospital, supports patient care billing, fulfills regulatory compliance, and, perhaps most importantly, enhances a physician’s ability to rapidly diagnose and treat the patient,” he says.

Sysmex America
Sysmex America Inc, a division of the Japanese diagnostics giant, is increasing business in the POCT sector with several products in its hematology analyzer lineup.

The Sysmex KX-2IN automated hematology analyzer is designed for near-patient, clinic, and satellite laboratory use.

Ending a sales and marketing relationship with Roche this past July, Sysmex America regained control over its analyzer business in North America. The Roche agreement is still in effect for nondomestic business. In addition to clinical laboratory testing instruments and reagents, Sysmex offers laboratory information system installation and maintenance.

The KX-21N, says Barranco, is the third generation of K-Series technology, which has been selling for 20 years. The KX-21N features completely automatic start-up and single-button sampling. It analyzes 19 parameters, including three-part white blood cell differentials and red blood cell, PLT, and white blood cell histograms. Daily maintenance is performed with a push of one button. Complete with a built-in thermal printer, the KX-21N connects easily to a host computer or internal LAN system. It contains six onboard files for comprehensive daily quality control.

Sysmex is readying introduction of a new analyzer geared to smaller-volume laboratories and requiring only a 15-µL whole blood sample. Pending FDA approval and scheduled for rollout late this year, the pocH-100I features a closed-tube option and three-part differential with a true neutrophil count for more effective clinical usage in oncology and pediatric settings.

“We believe this new analyzer will provide us an additional route to brand recognition and extend our line beyond the hospital market to clinics, satellite labs, physician office labs, and integrated office labs,” Barranco says. 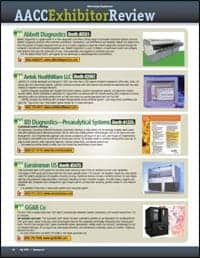 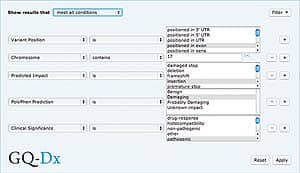