Advances in hematologic disease testing are giving physicians the comprehensive information they need for more effective treatment protocols for those diagnosed with blood disorders.

Over the past 40 years, refinements in testing have helped achieve significant increases in 5-year survival rates for those diagnosed with myeloma, lymphoma, and leukemia. From their origin in bone marrow and lymphatic tissues, these three diseases involve DNA injury in a single cell that becomes abnormal and multiplies. Eventually, the abnormal cells interfere with the body’s production of healthy blood cells, leaving the body susceptible to infection.

The general leukemia, lymphoma, and myeloma testing market is estimated at $50 million annually in the United States. These related diseases will be diagnosed in about 106,000 people in the United States in 2004, and that represents about 8% of the more than 1.3 million new cancer cases identified in the United States each year. An adult or child will die from these blood disorders every 9 minutes—58,000 deaths in all.

Yet testing for leukemia, lymphoma, and myeloma reflect only a small portion of the overall market in hematologic disease diagnostics—a market that is estimated to now exceed $500 million a year.

Quest Diagnostics
Richard A. Bender, MD, FACP, and medical director for Hematology/Oncology at Quest Diagnostics-Nichols Institute, says the latest advances in hematology testing encompass polymerase chain reaction–based assays to assist in diagnosis and prognosis and in monitoring the results of therapy.

“Also, flow cytometric assays to determine the presence of the membrane target for new monoclonal antibodies (such as Rituxan, Campath, and Mylotarg) have been developed as a precursor to initiating therapy,” Dr Bender says.

While hematologic malignancy is no more common today than 10 years ago, therapy is much more effective, according to Dr Bender. Leukemia testing is designed to determine the presence of cytogenetic abnormalities essential for correct diagnosis and to aid in therapeutic choices based on prognosis (including retinoic acid receptor translocation diagnosis to confirm promyelocytic leukemia and need for transretinoic acid therapy). After aggressive therapy or bone marrow transplant, these assays also are needed to monitor remission status.

Heredity and environment do not seem to be factors except for in myelodysplastic disorders (known previously as preleukemias), where such factors may play a role. Today’s more sophisticated molecular assays are capable of subtyping MDS into five groups, helping to assign prognosis and guide therapy.

Beckman Coulter
Beckman Coulter controls nearly half of the domestic hematology systems market and anticipates the market to grow only 1% to 3% annually in the years ahead, says Mary Beth Johnson, marketing manager for Hematology.

Beckman Coulter’s LH 500 is a midvolume analyzer for hospitals and larger clinics.

“It is a mature market that doesn’t have much room to grow,” Johnson says. “Also, the market is influenced by the continuing consolidation of hospitals, the decreasing numbers of available medical technologists, and an increase in integrated health care networks (IHNs).”

Beckman Coulter has extended its LH line of hematology analyzers in the past 30 months. It started with the introduction of the COULTER LH 700 series in 2001, followed in late 2002 by the LH 1500 automation system, a high-volume system that manages the entire hematology process from preanalytical sorting to postanalytical storage.

“Consistency of high-quality results and user interfaces play a critical role in turnaround times and the treatments available to patients,” Burton says. “Laboratories faced with labor shortages will continue to seek systems that reduce manual intervention and include decision rules that simplify testing.”

Sysmex
Hematology’s maturity and low margins aren’t stopping Sysmex, a 36-year-old Japan-based instrument maker, from pushing ahead with plans to increase its customer base in US laboratories.

After a 5-year US distribution partnership with Roche Diagnostics, Sysmex has begun selling products directly to customers. Now third in the US hematology market behind Beckman Coulter and Abbott, Sysmex wants to double US revenues within 3 years and eventually take over the segment’s number one spot.

Chief Operating Officer John Kershaw is part of the Sysmex team that propelled the company to its hematology leadership position in Europe and Asia. He now directs the company’s US sales efforts from new headquarters outside Chicago.

The company’s systems approach to hematology—using closed-cap sample tubes—was critical to its early success. Kershaw believes innovation and technical superiority will give Sysmex a competitive edge in the fight for market share.

Sysmex was the first company to get FDA approval for an automated measurement of immature granulocytes to replace manually performed tests. Kershaw says Sysmex’s XE-2100 was the first to automate nucleated red blood cells (NRBCs) using fluorescent flow cytometry for more accurate and sensitive counting. Sysmex was also the first to bring the diode laser to hematology.

“I believe fundamentally in best of breed; that is our customer laboratories are most interested in state-of-the-art equipment that provides the best possible diagnosis cost effectively,” Kershaw says.

The laboratory still accounts for 85% of a patient’s record, and hematology contributes a disproportionately high portion of that. “It may be a mature market with low margins, but hematology continues to drive so much of what goes on in the lab,” Kershaw says.

By developing new products concurrently and applying ideas to more than a single system, Sysmex is able to introduce a new analyzer every 3 to 5 years, Kershaw says. Recognizing shortages of qualified lab techs across the country, Sysmex is supplying products with much longer mean time between failures and exploring ways to monitor analyzer performance and provide service through remote access.

Wescor Inc
During the past year, Utah-based Wescor complemented its hematology lineup by introducing its model 7150 Aerospray Hematology Slide Stainer and Centrifuge.

“Our model 7150 had been under development for a long time,” Thomas says. “Unlike water-based systems, the Model 7150 provides methanol-based staining that delivers traditional staining with excellent results.”

Also, the company’s automated acid fast staining system introduced several years ago is used by a number of the larger US labs in tuberculosis testing, Thomas says. “But, the market is primarily overseas where TB is a significantly greater challenge than in the US,” Thomas says.

ABX Diagnostics Inc
At ABX, demand for hematology systems has remained fairly consistent as a replacement market. “Given the new medications dealing with everything from the stimulation of cell growth activity to the suppression of the immune system, rapid, concise hematologic results are as important as ever,” says Tom Brown, ABX’s US director of marketing.

Brown says his firm’s hematology products are ideal for every setting, from small practices to large hospitals. Products range from the Micros 60 to the Pentra 120.

The high-throughput Pentra 120 system can be equipped with a reticulocyte count and automated slide-making and staining. The ABX Paros is a stat c-reactive protein (CRP) analyzer, while the Micros-CRP can simultaneously perform a complete blood count with three-part differential and a CRP.

“This gives the physician another tool in the diagnosis of viral versus bacterial infection. Clinical studies are under way to validate the clinical utility of this information in multiple settings,” Brown says.

With clinicians being asked to do more with fewer resources, manufacturers are being challenged to come up with higher-accuracy instruments that provide less reflexive testing. “But most important, these instruments need to be reliable and dependable,” Brown says.

The focus at ABX is on producing systems that can run from one preventive maintenance to the next with minimal maintenance. In the future, ABX will launch a high-end system called the 120DX. The new system will include an NRBC count and many software and flagging enhancements.

Pall Corp
Improving the safety of the blood supply is an important strategy for Pall Corp. The company, with $1.6 billion in sales last year, has entered the diagnostic testing market with a system for detecting bacterial contamination in platelets. Pall’s inaugural bacteria detection system (BDS) received clearance from the FDA last year.

Blood collection and filtration are essential to ensuring an adequate and sound supply of blood for blood banks and ultimately the patients who receive transfusions. The Red Cross and independent blood centers are key Pall customers. Bacterial contamination can result in death in one of every 12,000 transfusions. Pall’s rapid BDS gauges changes in oxygen concentrations caused by bacteria growth and produces a simple “pass” or “fail” reading.

Because platelets are stored at room temperature, they are the blood component most prone to contamination. Detection is complicated by the fact that there are numerous strains of bacteria with varying growth rates and times. Blood banks must be able to detect bacteria without false-positive results so that valuable, viable platelets are not discarded and wasted.

Approximately 2.1 million platelets are transfused each year in the United States, primarily as a life-saving therapy for those with cancer, leukemia, or bleeding problems.

According to Byron Selman, vice president of Pall’s bacteria detection program, Pall is awaiting FDA review completion for an enhanced version of its BDS. He expects market clearance early this year. 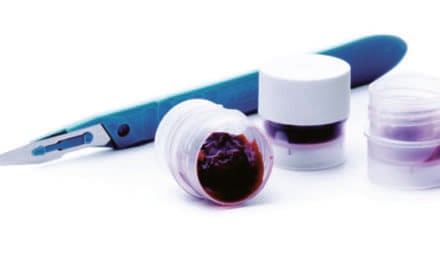