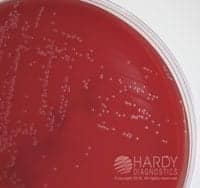 Arcanobacterium haemolyticum is a beta-hemolytic Gram-positive, pleomorphic, facultative anaerobic rod that has been implicated as an etiologic agent of nonstreptococcal pharyngitis, especially in adolescents and young adults.

It has also been described as a cause of skin and wound infections, osteomyelitis, sepsis, central nervous system infections, endocarditis, cellulitis, sinusitis, meningitis, pharyngotonsillitis, peritonsillar abscesses, and systemic infections in all age groups.

Since the symptoms of A. haemolyticum pharyngitis may be confused with those of group A streptococci (GAS), diphtheria and drug allergies, it is important to screen and test for this organism appropriately, especially in instances when rapid tests or culture are negative for GAS, the company says. It is estimated that the number of throat infections caused by A. haemolyticum ranges from 5% to 13% compared to those caused by group A streptococci. Studies show that this organism is responsible for 0.5% to 2.5% of all cases of bacterial pharyngitis; but this may be an underestimate due to the previous lack of an effective selective medium.

Although A. haemolyticum is usually sensitive to penicillin in vitro, there are many reported treatment failures. For this reason, erythromycin is the drug of choice, rather than penicillin. This is why identification of this organism and differentiation from group A strep is of extreme importance.

A. haemolyticum typically grows slowly and exhibits less well defined beta-hemolysis on sheep blood agar and can be easily masked by commensal throat flora or falsely interpreted as an oral contaminant. The use of a selective medium that effectively inhibits S. pyogenes, as well as commensal respiratory organisms, may significantly increase the detection rate of A. haemolyticum, according to the company.

Available as a mono or bi-plate. The bi-plate includes Group A Beta Strep Agar.

Influenza A and B Test