FDA has granted premarket notification (510(k)) clearance for the CytoScan Dx assay by Affymetrix, of Santa Clara, Calif. The new test is intended for the postnatal detection of DNA copy-number variants in patients referred for chromosomal testing.

“This clearance is first-of-its-kind, and represents a leap forward in molecular genetic testing,” said Frank Witney, Affymetrix president and CEO. “The CytoScan Dx assay is the first FDA-cleared test that analyzes the whole genome in a single assay at unprecedented resolution, which significantly improves diagnostic capability. Developing and clearing this assay establish Affymetrix as a leader in advancing molecular diagnostics by bringing high-quality genomic tools into routine application in the clinic.”

“With 2 to 3% of children in the United States having some form of developmental delay or intellectual disabilities, finding a diagnosis for the patient and their family can become a lengthy odyssey,” said Alka Chaubey, PhD, director of the cytogenetics laboratory at the Greenwood Genetic Center, Greenwood, SC. “This assay represents the best option for accelerating an accurate diagnosis.”

According to Witney, Affymetrix expects to make the CytoScan Dx assay available to US laboratories within the next few months. “In addition,” said Witney, “the clearance by FDA is an important milestone for supporting adoption in other key countries around the world where they are now evaluating advanced tools and tests like this.” 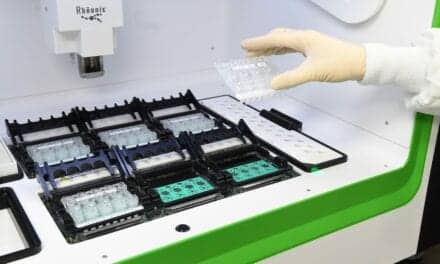