A decade ago, women diagnosed with breast cancer were treated with more or less the same aggressive chemotherapy regimen. Because this treatment, with its frequent debilitating side effects, was successful in only a small number of  patients, research efforts have evolved to focus on treatment strategies that can be tailored to individual patients.

Pathology plays an integral role in determining a patient’s treatment strategy. Once a pathologist has identified the diverse properties of the cancer cells, the physician can recommend the most appropriate treatment. Dr. Hans Anton Lehr of Mainz, Germany, a professor and research pathologist, recognized the need to find new ways to improve the accuracy of breast cancer diagnosis. During his 1998 residency and fellowship at the University of Washington in Seattle, Lehr stumbled upon an amazing discovery. Adobe Photoshop, one of the world’s most widely used image editing software program, could be used as a cell analysis tool.

Lehr had been watching his wife, who is a graphic designer, manipulate images using Photoshop 3.0. Traditionally used for manipulating photos for print and the Web, Photoshop is a tool that has been used by photographers, graphic designers and other mouse-wielding innovators for the past nine years. While watching his wife alter photos and images, Lehr figured that if Photoshop can change and manipulate specific parts of images based on shape, color, gray levels, or other very specific quantifiable criteria, why can’t it also help in assessing the precise characteristics of tumor cells? “I found that it definitely could,” Lehr said. He and his wife were struck by the irony that the same software that can make it look like President Clinton is shaking hands with a space alien could also be used to help save lives.

Lehr, now a professor at the Joh. Gutenberg University Medical Center in Mainz, Germany, outside Frankfurt, works with pathological research colleagues to make accurate statements concerning the proliferative activity of cancerous tumor cells, an important factor in predicting the spread of cancer. Photoshop allows Lehr to analyze the hormone receptor expression of cells, an integral piece of routine breast cancer diagnosis. Determining the hormone receptor expression provides important information on whether or not patients will benefit from anti-hormone treatments such as Tamoxifen. In addition, Lehr is analyzing the blood supply of tumors and the expression of specific tumor antigens, such as the tumor suppressor gene p53 or Her2/neu. The latter tumor cell features allow not only prognostic statements, but also predict how well tumors will respond to particular chemotherapy regimens.

Viewing nuclei with Photoshop
The camera-equipped microscopes used by most pathologists can import images into a desktop computer. Once the sample is viewed under a microscope and the cancer type defined, it can be further analyzed by importing the image into a computer and looking at it with Photoshop.

Once inside Photoshop, the pathologist can precisely analyze the proliferative rate of the cells. Using the magic wand tool, he first selects proliferating cancerous cells. Then, using the similar command, all other proliferating cancerous nuclei are selected. Using the Fill tool, the entire area is transformed to a gray scale image. A custom plug-in program for Photoshop then counts the black areas, providing a highly accurate gauge of the tumor’s proliferative activity. “Without an image analysis system, the nuclei must be counted cell by cell or visually estimated. We compared the proliferative rates assessed by visual estimation with the manually counted number, then with the computer-generated number, and we found exceedingly strong correlations,” Lehr said. “Using Photoshop, we’re able to count the nuclei in a fraction of the time, and we know the count is exceedingly accurate and not subject to observer bias or subjectivity.”

Photoshop performs these analyses with a higher degree of accuracy than traditional methods. Common practice is to simply make a visual estimate of certain cell features. Often such a crude assessment falls short of providing a reliable basis for recommending treatment strategies and does not allow for comparison with reports from other pathologists, hampering the reproducibility of research findings. Ultimately, the more precise information obtained from using Photoshop should allow physicians to provide the most appropriate and effective individualized treatment.

Photoshop can be used across all phases of a patient’s treatment, from determining how fast tumor cells proliferate to pinpointing how well a patient is responding to anti-hormone therapy. “Photoshop is a key tool in triaging patients to optimal treatment, because it gives a much more accurate picture of what’s going on than simply viewing cells under a microscope,” Lehr said. “Furthermore, Photoshop is helping us quantify our research in order to improve future treatment.” Lehr’s data have been meticulously validated through comparison with other techniques, and his findings and published studies have been received enthusiastically at several medical and scientific conferences.

Each summer, Lehr returns to Seattle to work with his colleague Dr. Allen Gown, formerly the head of the Immunohistochemical Research Institute of Seattle and now Director and Chief Pathologist at PhenoPath Laboratories. The two are seeking new ways to use digital imaging technology to improve cancer research and treatment. “I know we’ve only scratched the surface of how digital imaging can help improve research on breast cancer,” Lehr said. The doctors are now using Photoshop to help quantify experimental myocardial infarction, ischemic brain damage and the severity of colitis. “The power of Photoshop is incredible and yet unrealized,” according to Gown. “What has essentially been used as a graphic software application has been turned into an image analysis tool with great success.”

Lehr views Photoshop as a major discovery, primarily because other medical image-processing systems are prohibitively expensive. Only major medical centers can afford custom-made technology, which despite enormous programming effort, are designed to do few limited tasks. Their “closed box” design limits their versatility and many are sold bundled with expensive hardware, he said.

As Lehr continues his research with Photoshop, he hopes other pathologists will use the software to integrate image analysis into diagnostic pathology. “Its ease of use and versatility should make the application of this technique a rewarding experience for any pathologist interested in improving the accuracy of his diagnoses of breast cancer and many other diseases,” he said. He believes that the tool will make a difference not only for the treatment of individual patients, but may eventually provide a standardized and reproducible basis for the comparison of data between different hospitals, thus contributing to the ongoing research into novel tumor treatment strategies.

For additional information on Adobe Photoshop, call 800-492-3623 or visit their web site at www.adobe.com .

In Aftermath of Explosions, Boston Hospitals Treat Scores of Wounded 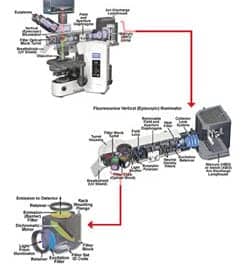