After lung cancer, colorectal cancer (CRC) is the leading cause of cancer-related deaths in the U.S. In the year 2002, it is estimated that nearly 150,000 people were newly diagnosed with CRC, and more than 56,000 people died from the disease.

Cancers of the colon and rectum typically develop in the large intestine, and are thought to begin as adenomatous polyps, benign groups of cells that over time have the tendency to develop into cancerous lesions. In the later stages of CRC, cancerous polyps may penetrate colon walls and metastasize to the lymph nodes and other organs. Patients diagnosed with colorectal cancer often present with a change in bowel habits, rectal bleeding or blood in the stool and abdominal discomfort. New recommendations for colorectal cancer screening, as well as new proteomic and fecal DNA assays may help to detect CRC earlier, which experts feel will further reduce the mortality related to this disease.

Colorectal cancer is more common among men than women. Several theories have been explored for this gender-based disparity, including a possible protective effect from estrogen, as well as lifestyle differences. Epidemiologic studies, animal experiments, and clinical investigations show strong evidence that diets high in total fat and meat (both red and white) and low in calcium and folate, are associated with an increased incidence of colorectal cancer. A high intake of dietary fiber has also been hypothesized to decrease the risk of colorectal cancer, but recent data have shown that an intervention diet rich in fruit, vegetables and fiber failed to decrease the risk of new colorectal adenoma formation. Smoking and alcohol intake, particularly in combination, as well as a sedentary lifestyle, are also risk factors. For both men and women in the U.S., death rates from CRC is highest among blacks, and lowest among Hispanics, Asian and Pacific Islanders, and American Indians/Alaska natives.

Global incidence rates for CRC show wide variation, but are fourfold higher overall in developed nations, and increase dramatically as populations “westernize” their diet and lifestyle.

While the cause of colorectal carcinogenesis remains unclear, several precursors to disease development are known. Age is a primary factor: the risk of colorectal cancer begins to increase after the age of 40 and rises sharply at the ages of 50 to 55; with each succeeding decade, the risk doubles. In the U.S., the average lifetime risk of developing CRC is about six percent. A history of inflammatory disease, including Crohn’s disease and ulcerative colitis, is associated with higher risk.

Familial history of CRC, including hereditary factors and shared exposure to environmental carcinogens, is also a primary risk factor. Researchers have identified several genetic disorders that are associated with colorectal cancer. Familial adenomatous polyposis (FAP), a hereditary disorder that causes the development of multitudes of polyps, is caused by a mutation of the growth-regulating adenomatous polyposis gene on chromosome 5. Hereditary non-polyposis colorectal cancer (HNPCC), while producing fewer polyps, is also associated with a higher risk of cancer development. This cancer occurs from abnormalities of DNA mismatch repair (MMR) genes, specifically hMSH2 and hMLH1. These defects are expressed as microsatellite instability in tumor cells, and are characterized by a failure of the genes responsible for cell repair to function normally and suppress tumor development. People diagnosed with HNPCC have a 70 to 80 percent chance of developing disease.

Two recent studies have also independently confirmed a link between risk for CRC and a mutation of the BLM gene found in people descended from Ashkenazi (Eastern European) Jews: inheriting the mutation from even one parent resulted in a to a two- to three-times greater risk of colorectal cancer. Although the particular mutation is not found in other populations, researchers believe that other mutations of the BLM gene — which normally protects DNA from excessive recombination and mutation — may contribute to colorectal cancer in the general population.

Treatment for colorectal cancer depends upon the stage of the disease, which defines the level to which the cancer has become invasive and has metastasized to other organs. Typically, patients undergo surgical removal of the diseased portion of the colon along with a margin of healthy tissue and possible resection of localized lymph nodes. This surgery also may involve either a temporary or permanent colostomy. Small lesions may be removed either during colonoscopy or with laproscopic surgery. Chemotherapy and radiation therapy are often used in conjunction with surgery to treat more invasive disease conditions. Five-year survival rates for patients with no lymph involvement reach 90 percent. For those with metastatic disease, survival rates drop to 65 percent.

Recently, the U.S. Preventive Services Task Force updated its CRC screening recommendations by including periodic colonoscopy or double-contrast barium enema to fecal occult blood test (FOBT) and flexible sigmoidoscopy as screening tools deemed to be effective in reducing mortality associated with the disease. Published in the July 16, 2002 edition of the Annals of Internal Medicine, the panel recommends that persons 50 or older undergo FOBT every one to two years, flexible sigmoidoscopy every five years, double-contrast barium enema every five years, and colonoscopy every ten years.

There is clear evidence that screening for colon and rectal cancers has significant influence on mortality due to our current ability to detect precancerous lesions. Three recent randomized controlled trials of serial fecal occult blood test screening demonstrated a cumulative reduction in cancer mortality of 15 to 33 percent after ten to fourteen years. A marked reduction was also noted in the colorectal cancer incidence of Dukes’ stage D cancers in comparison with the control group. These results are consistent in demonstrating a substantial, statistically significant reduction in colorectal cancer mortality from biennial screening. Screening guidelines for CRC, however, are complex in comparison with other types of cancer, which emphasize one type of test (e.g., mammography and Pap smear). Beyond the FOBT, CRC guidelines make use of flexible sigmoidoscopy, double contrast barium enema (DCBE) with X-ray, and colonoscopy — crucial and lifesaving tests, but with ones with drawbacks related to cost and consumer attitude toward invasive aspects of the procedures.

As a result, researchers are now exploring both serum markers and fecal DNA sampling to find more sensitive, specific, and less invasive methods to screen for colorectal cancers. “NCI has quite an active group researching the development of biomarkers for early detection of cancer as well as validation of these markers for eventual use in the clinical setting,” said Asad Umar, DVM, PhD and program director for gastrointestinal research in the division of cancer prevention at the National Cancer Institute. “Generally, the most promising new technology is the proteomics approach. We currently have very good results in the ovarian cancer arena, and we are exploring the use of proteomics patterns for use in detection of colon cancer as well.” This new method consists of using SELDI time-of-flight mass spectroscopy to detect key proteins in the serum of ovarian cancer patient. Key to this method is an artificial intelligence program that is “trained” to identify these patterns as compared to controls. With this technique, researchers were able to correctly identify 50 out of 50 cancer samples, and 63 out of 66 non-cancer samples. According to Umar, the next series of studies utilizes a new SELDI microarray chip that has the potential to increase sensitivity and specificity to 100 percent. “This chip yields much more data and will probably take longer than the one used in the previous study, but the results indicate a much clearer ability to distinguish cancers from noncancers. We are looking at these methods for early detection of colon cancer, and if viable, this approach may complement or improve on current methods for screening,” he added.

Also under development are fecal DNA panel tests that look at multiple markers. “Carcinogenesis is a continuum of events over time. If you only look at one event, you might miss the cells that haven’t gone through the complete process from adenoma to carcinoma. We are seeing a higher success rate in looking at multiple markers, in both fecal DNA testing and proteomics analysis,” explained Umar. In this method, human DNA is recovered from fecal samples, and is assayed for mutations on K-ras, APC and p53 genes, Bat-26 (a microsatellite instability marker) and “long” DNA. According to researchers, this type of screening when available would not be impacted by either diet or medication, and a single sample may be sufficient. Additional markers, including those for specific tumor sites, could eventually be developed as assay techniques become streamlined and more automated.

Umar’s group is in the process of launching another study that combines high resolution endoscopy with genetic profiling of aberrant crypt foci. These foci are present in the colon, and are thought to be precursors of adenoma and cancer. In this study, patients and volunteers will undergo magnifying endoscopy for determination of the prevalence, size, number and features of these foci. Additionally, biopsied tissue will undergo testing for K-ras and APC mutations. Once clinically available, it is thought that this method will allow for more sensitive screening than current colonoscopy and sigmoidoscopy techniques.

It is not hard to fathom why current screening methods lack popularity among people at risk for CRC, including the significant numbers of those aged fifty and above. As new technologies become more automated and available, the role of the clinical laboratorian will become more essential in the diagnosis and management of all cancers, and especially CRC as the majority of the population reaches the high water mark. Remember, you are what you eat.

Louise Lazear is a freelance writer based in Charlotte, North Carolina.

From the Editor: AACC: What I’m Hearing 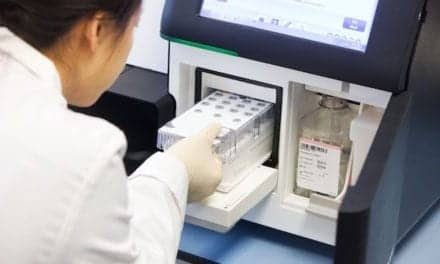