Canary Foundation has committed to being the first organization to implement the breakthrough in biosensor technologies in its research pipeline. The new technology promises to revolutionize the early detection cancer field.

Scientists from Stanford University’s Department of Bioengineering, Molecular Imaging Program at Stanford, Department of Radiology, Bio-X Program, Department of Materials Science and Engineering, and Department of Urology have developed a new ultra-sensitive magnetic nanosensor (magneto-nanosensor) that can measure biomarkers in a host of clinical samples such as blood, urine, and saliva. It promises to detect disease much earlier than ever before.

Sanjiv Sam Gambhir, MD, PhD, Director of the Canary Center at Stanford for Cancer Early Detection, Director of the Molecular Imaging Program at Stanford (MIPS), Head of the Division of Nuclear Medicine, and Member of Bio-X Program and Departments of Radiology & Bioengineering, co-authored the "Matrix-insensitive protein assays: pushing the limits of biosensors in medicine" paper that will appear in the October 2009 edition of Nature Medicine. The paper proves that the magneto-nanosensors are over 1,000 times more sensitive and effective than the current "gold" standard, ELISA (enzyme-linked immunosorbent assays).

"We are extremely excited to be the first foundation to use the new measures and methods in magneto-nanosensor technology towards early cancer detection," stated Don Listwin, founder and chairman of Canary Foundation and member of the National Cancer Institute Board of Scientific Advisors. "We will be bringing all developed biomarkers across our programs at Canary to this chip for ongoing development and testing."

The magneto-nanosensor is very sensitive: a small amount of protein can be tested in a drop of blood to detect the change cancer causes in the bloodstream — translating to earlier detection for intervention and cure. This advance is momentous for early detection cancer research, as many cancers require an ultra-sensitive biomarker to identify cancer early when the proteins are not as frequent.

In a recent PLoS Medicine article, Dr Patrick Brown of the Department of Biochemistry, Stanford University School of Medicine, attests most ovarian tumors are the size of an onion when identified. Dr Brown also concludes that if given sufficient lead-time, ovarian cancer can be detected, but current tests are insufficient in sensitivity. The magneto-nanosensor presents the sensitivity necessary to identify tumors at the size of a blueberry.

The chips are 1.2 cm x 1 cm, each containing an array of 64 magnetoresistive sensors, that can test a diverse range of biological fluids, such as blood, urine, and saliva. Because the chip has 64 sensors, it would allow for multiple tests for multiple types of cancer to occur simultaneously. The chip is also microfluidic, signifying that only a drop or 2 of blood are necessary for the test.

We envision that each disease-detection will require 4 to 8 biomarkers. Because the chip could produce 64 tests at once, it could detect 8 to 16 cancers simultaneously, giving us complete coverage of all major types of tumors.

The ability to detect a range of cancers 3 to 6 months earlier will help in prevention and treatment, while also decreasing the false-positive tests that are currently a bi-product of so many cancer screening tests. Our goal is to have this technology in our laboratories in 2010. Canary Foundation’s intention is to bring over our current portfolio of markers that number in the dozens and apply and test these samples using the magneto-nanosensor to predict cancer at the earliest possible stage. 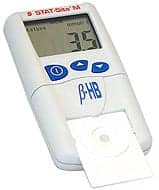