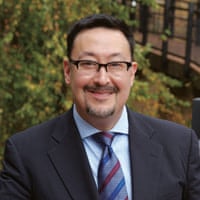 Technologies go to the next level in diagnosing hospital-acquired infections

Each year, two million Americans go to the hospital to be treated for a known condition. Ten percent of these patients will contract a hospital-acquired infection (HAI)—and 100,000 of these people will die—more than twice the number of people killed by breast and colon cancers combined. This makes HAIs the fourth leading cause of death in the United States.
Unfortunately, this trend is steadily increasing because the pharmaceutical and laboratory diagnostics sectors have not been able to keep up with microbial evolution.
“Antibiotics have been used so widely that the infectious organisms they are designed to kill have adapted to them, making the drugs less effective,” says Michael Bell, MD, acting director, Division of Healthcare Quality Promotion, Centers for Disease Control and Prevention (CDC), Atlanta. “People infected with antimicrobial-resistant organisms are more likely to have longer, more expensive hospital stays, and may be more likely to die as a result of the infection. In fact, some bacteria have no antibiotic options left.”
Studies show that nearly 50% of antimicrobial use in hospitals is unnecessary or inappropriate. “Overusing antibiotics contributes to the growing challenges posed by Clostridium difficile (C. difficile) and the antibiotic-resistant bacteria in many hospitals,” Bell says. “However, studies also demonstrate that improving the use of antibiotics in hospitals can not only help reduce rates of C. difficile infection and antibiotic resistance, but can also improve individual patient outcomes, all while saving hundreds of thousands of dollars in healthcare costs.” 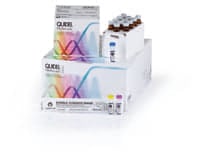 Quidel’s Molecular Direct C. difficile assay is a real-time polymerase chain reaction (PCR) diagnostic test for the qualitative detection and identification of toxigenic C. difficile bacterial DNA.     A big part of the problem is that infections can’t be diagnosed quickly enough. Information garnered using standard pathogen culturing methods typically requires 2 to 3 days to process. Physicians, however, are required to initiate therapy within 2 hours of suspecting a serious infection. “Without adequate information being available from the laboratory, the physician typically is compelled to initiate a regimen of broad-spectrum antibiotics,” says Pete Bantock, chief commercial officer, Accelerate Diagnostics, Tucson, Ariz. “Because of increasingly complex drug resistance, these initial attempts fail to control the infection about 30% of the time. Increased use of broad-spectrum drugs only hastens the loss of efficacy of those very same compounds.”
This situation occurs because extensive use of these drugs serves to promote the survival of new variant strains of bacteria that acquire resistance and thereafter have the liberty to spread their “successful” genes, Bantock says. The central issue, given the lack of major new antibiotic development, is the direct need for very rapid laboratory automation and assays that not only identify bacteria, but also rule in effective antibiotics before the physician initiates the second dose of antimicrobial therapy (in less than 8 hours after receiving a patient specimen).

The Quicker, the Better 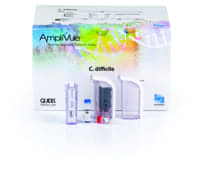 Quidel Corp offers the AmpliVue C. difficile assay, a molecular diagnostic test for C. difficile detection.
It is preferable when infections can be detected and treated as early as possible. “Not only does that save lives and allow patients to get well sooner, but it also can reduce the risk that the infection will spread to someone else,” Bell says.
Very ill patients in the intensive care unit have depressed immune function. They are highly vulnerable to infections because of their underlying severe illness. “Studies have shown that switching antibiotics from an inactive drug to an effective drug makes little difference in outcome if delayed for even 24 hours,”1 Bantock says. “Additional studies have shown that with the most severely ill patients, mortality risk climbs 7.6% per hour of delay in starting effective therapy.”2
However, as important as early diagnosis is, accurate diagnosis is even more important. “Rapid tests for HAIs can lack sensitivity and are being replaced by more costly and complex molecular tests,” says Paul D. Olivo, MD, PhD, senior medical director, Quidel Corp, San Diego. “There is a need for molecular tests which are easier to perform and less expensive, but which retain a high degree of accuracy.”
Facilities that run surveillance programs based on complete genetic profiling of HAIs can enable more informed and proactive infection control practices to ensure a safe environment and mitigate the financial risks associated with unit closures and decontamination, says Douglas White, CEO, OpGen Inc, Gaithersburg, Md.

The Economic Burden of HAIs

Time is of the essence in reducing HAIs, not only from a healthcare perspective, but also for financial reasons. According to the CDC, the annual estimated cost of HAIs ranges from $28.4 billion to $33.8 billion.3 Government regulations are already decreasing reimbursement to hospitals for HAIs and will continue to do so. As a result of the Deficit Reduction Act of 2005, which became effective on October 1, 2008, Medicare will not reimburse for certain types of HAIs.4
The Affordable Care Act, which was also implemented in 2008, incentivizes hospitals to lower their readmission rates (which are often due to HAIs) and achieve better care on certain quality metrics. As of this year, hospitals get reduced reimbursement when their readmission rates exceed a certain amount.5 The program is funded by withholding payment from hospitals that perform poorly.

In light of the impact of HAIs, laboratory technology manufacturers are stepping up to the plate to offer products that can quickly and accurately diagnose them. Here’s a sampling of what’s available now.

“Microbiology/Virology: Testing One for All“