Nanopipettes with zwitterionic membranes may offer improved monitoring of changes in pH surrounding living cells, which can indicate traits of invasive cancer cells and their response to treatment, according to research from Kanazawa University.1
At present, the probes most commonly used to measure pH are based on microelectrodes that are quite large in comparison to the scale of the pH fluctuations of interest in studies of extracellular pH. Current techniques for measuring pH—based on changes in the fluorescence of molecules, nuclear magnetic resonance imaging, and positron emission computed tomography—are problematic. Monitoring fluorescence is subject to background noise and photobleaching, and the other techniques have poor spatial resolution and raise difficulties in quantification because they are based on the distribution of probes within tissue. 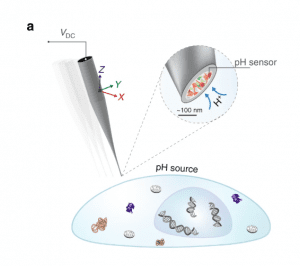 By using a nanopipette as an ionic field effect transistor, the Kanazawa researchers were able to overcome most of the issues limiting previous techniques. However, mutual same-charge repulsion leads to the Coulomb blockade effect, which inhibits the diffusion of positively charged protonated water molecules in the nanopipette, slowing response time.

To address this issue, the researchers introduced a zwitterionic membrane. A zwitterion is an uncharged molecule containing opposingly charged functional groups. For the zwitterionic membrane in the nanopipette, the researchers self-assembled a hydrogel from poly-l-lysine (PLL) and glucose oxidase (GOx). The PLL has positively charged quaternary amine groups, and the GOx has a negatively charged carboxylic acid residue group. The presence of glutaraldehyde vapor can then crosslink the resulting PLL/GOx hydrogel.

In neutral pH, the zwitterionic membrane presents both positively and negatively charged functional groups. But in low pH conditions, the positive amine groups dominate so that negative anions preferentially diffuse through the membrane, avoiding an ionic Coulomb blockade.

“It is becoming clear that an acid extracellular pH plays an essential role in cancer cell progression, invasiveness, and resistance to therapy,” the researchers write.

Despite growing recognition of the importance of the pH directly surrounding a cell as an indicator of cell health, techniques to measure it so far remain limited in terms of their sensitivity, spatial resolution, and speed of response to pH changes. The Kanazawa research describes a nanopipette pH biosensor that is sensitive to changes in pH of less than 0.01 units, with a response time of 2 ms, and 50 nm spatial resolution.

The researchers originally designed the sensor as a nanopipette ionic field effect transistor—where gates control the flow of ions in the nanopipette instead of electrons. While such a design addressed issues around pH sensitivity and spatial resolution, however, device readings still took a few seconds to respond to pH changes because ionic Coulomb blockade effects hampered the diffusion rate of ions.

The solution proposed by the researchers is to incorporate a zwitterionic membrane to enable faster responses. By using a twin-barrel nanopipette with the membrane in just one of the barrels, the researchers were able to use the other barrel as a scanning ionic conductance microscope for simultaneous topological measurements.

The team tested the device on live cancer cells, and showed that it could detect increases in extracellular pH from invasive phenotypes of breast cancer cells that had been deprived of estrogen. They could also detect pH changes from algae exposed to sunlight, caused by the uptake of inorganic carbon in photosynthesis. And they were able to identify heterogeneities in aggressive melanoma cells from high-resolution pH maps.

Noting the real-time feedback-controlled dynamic 3-D mapping of extracellular pH that their tool allows, and the heterogeneities of cancer cells that it can detect “label-free and at subcellular resolution,” the researchers conclude, “this method could help with cancer diagnosis, prognosis, and in evaluating acidic pHe [extracellular pH] targeted therapies.” 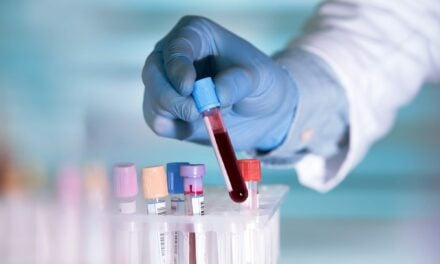