COWIN, a European initiative to facilitate the take-up of advanced technologies, is now helping the commercialization phase of a European project to develop a lab-on-a-chip. The concept of a lab-on-a-chip has been around for many years but this project, which has been co-ordinated by IK4-Ikerlan, has brought together over a dozen different companies from around Europe to contribute the various technologies needed to make it a success.

Called LabOnFoil, it is now at the stage of having three different products that are at the field testing phase. "There is always a danger that projects such as this can lose their way when researchers find something interesting and go off on a tangent," explained Dr Jesus Ruano, International Project Manager at IK4-Ikerlan. "To ensure that we kept on track and on budget, we used a very strict product design model where the form and functionality of every component was clearly specified at the start. This meant that we were bringing together a jigsaw where each component was precisely defined and that made the coordination and timing much easier. Now that we have the technologies and product design sorted, COWIN is playing a vital role in helping identify which application areas to focus on and what are the key differentiators over existing solutions that will make LabOnFoil successful in each target market. For example, for some applications such as pathogen testing or in an accident and emergency department being able to provide test result in 30 minutes rather than two days is a tremendous advantage but for routine blood tests it is not."

Each LabOnFoil kit is designed to identify a particular type of DNA. The Pathogen testing range can identify either Campylobacter or Salmonella. The Pathology range is tuned to blood proteins whose presence indicates that a treated cancer patient does not have a re-occurrence of cancer. The Environmental range detects the presence of red algae that gives an indication of climate change as this causes algae blooms when the sea temperature rises. These all use a special, credit card-sized, plastic test unit — a LabCard, which is pre-loaded with the appropriate reagents for the test required. The LabCard is made from injection moulded plastic with the appropriate reservoirs and valves as required for a particular specific analysis. A thin film of plastic is laminated on top to seal in the reagents and this is flexible enough to act as valves when moving the liquids though the various stages such as Polymerase Chain Reaction (PCR) to replicate and increase the DNA. Labcard with pre-stored reagents

The sample is sucked up into the supplied syringe where it mixes with the initial reagents and is then squirted into a reservoir on the LabCard. The LabCard is then inserted into a LabCardReader£ reader unit that automatically heats the LabCard, and opens and closes the valves on it to move the test sample through the preparation stages. The last step is to detect fluorescence that indicates the presence of the target DNA which can be in concentrations at low as a few femtograms of DNA in 30 minutes. LabCardReader prototype Geraldine Adrieux Gustin, the COWIN coordinator, added, "We are now helping IK4-Ikerlan plan the strategy to develop this product line further with multi-pathogen detection, handheld readers that plug into smartphones, new markets, etc. Potential customers are very excited as there are now real working products that can offer significant advantages over the existing gold standards by being faster, cheaper, simpler, or more sensitive as required." 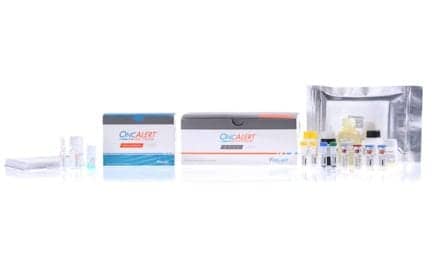