According to the Centers for Disease Control and Prevention (CDC of Atlanta, Ga), colorectal cancer is the second-leading cancer killer in the United States. Yet as many as 60% of these deaths could be prevented if everyone 50 years or older were regularly screened. Unfortunately, the traditional form of testing, using guaiac-based tests, has a low rate of patient compliance and a subsequent high cost.

A dowel is used to scrape a stool specimen to collect the sample.

To increase compliance outside medical institutions and to improve efficiency inside the lab, Polymedco Inc (Cortlandt Manor, NY) has introduced a new analyzer recently cleared by the US Food and Drug Administration (FDA of Rockville, MD). The OC-Auto Micro 80 Analyzer makes the fecal occult blood test (FOBT) collection less unpleasant and its testing automatic and standardized.

Money Out the Door
In its early stages, colorectal cancer often causes no visible symptoms. Trace amounts of blood are difficult to detect in the stool visually, and patients are not likely to notice anything is wrong until the cancer has advanced beyond an early stage.

For this reason, several scientific organizations, including the American Cancer Society (ACS of Atlanta, GA), recommend regular screening for patients age 50 and over, suggesting an annual FOBT traditionally completed with guaiac-based testing. “Guaiac-based tests have been the standard for 30 to 40 years. The process relies on a basic chemical reaction, and as a result, no improvements have been made,” says George Oldham, technical product manager at Polymedco.

To conduct a guaiac-based test, patients are given three cards on which to smear three separate stool specimens. To prevent cross-reactions and false positives (the test is unable to distinguish between human and animal blood), patients must modify their diet for 3 days prior to giving the samples. Foods to avoid include red meat, fish, turnips, and horseradish. Faced with the dietary restrictions and the specimen-collection method, patients frequently decide to forego the test or cheat—using one stool sample for all three cards, for instance.

The result is negative for both the patients, who have not been adequately screened, and the medical facility, which sees its money walking out the door. “With traditional testing, the major cost is in the cards. So when patients leave and do not return their tests, there is no return on investment. With the OC-Auto Micro 80, the larger portion of the expense is in the reagents, which are controlled by the analyzer so the investment remains in-house,” says Oldham.

More Screening, Improved Outcomes
With the new test, a single, less costly collection device is entrusted to the patient. The collection process itself is also more efficient and less prone to errors. The patient uses the device to scrape his or her stool, automatically collecting an adequate amount. The dowel containing the sample is then returned to the device, which is stored in the provided envelope.

The system is closed, in contrast to the traditional method, which left the smeared cards exposed. “Occasionally, the lab would need to rehydrate the smears to read results,” notes Oldham. He adds that the new product’s collection device is stable for up to 14 days when refrigerated.

The closed collection device eliminates this factor and provides a neater collection method for the patient. In addition, because the test uses an immunochemical reaction, patients do not need to modify their diets beforehand. As a result, patient compliance is expected to increase.

Greater compliance means improved screening. The CDC estimates that 41.8 million average-risk people age 50 years or older have not been screened for colorectal cancer, according to national guidelines. But more than 90% of cases are diagnosed in this age group.

A recent report by the ACS, titled Colorectal Cancer Facts and Figures Special Edition 2005, found that because screening rates are low, only 38% of colorectal cancers are found early. The report also found that when cancer is diagnosed and treated before spreading outside the colon, the 5-year relative survival rate is 90%. Once the cancer has spread to nearby lymph nodes or tissue, survival drops to 67%. If the cancer has spread to other organs in the body, the chances of surviving 5 years are just 10%.

Because the larger portion of the cost is attributed to reagent on the analyzer, a facility’s investment stays in-house.

Sensitive, Specific, and Standardized
Treatment at an early stage is not only more successful, but also less expensive. Improved accuracy in the testing can reduce cost as well.

False positives and negatives are common with some traditional guaiac-based testing methods. Both have expensive consequences: False negatives may miss the disease in its early stages, and false positives can lead to unnecessary testing. Positive results are typically followed up with a flexible sigmoidoscopy or a colonoscopy to rule out polyps, says Oldham. The tests are invasive and expensive when unnecessary.

According to the American Cancer Society’s 2003 Guidelines for Screening and Surveillance for the Early Detection of Adenomatous Polyps and Colorectal Cancer, “In comparison with guaiac-based tests for the detection of occult blood, immunochemical tests are … likely to be equal or better in sensitivity and specificity.” This statement applies to Polymedco’s OC-Auto Micro 80 test, notes Oldham. The analyzer provides a qualitative yes-or-no answer derived from photometric measurement of the specimen’s turbidity. If human blood is present in the sample, it will bind to a specific antigen in the reagent that is introduced by the analyzer, causing the specimen to become cloudy. The analyzer measures the difference in turbidity before and after the reaction.

The OC-Auto Micro 80 Analyzer can run 80 samples per hour.

The system, which can process 80 samples an hour, is fully automated and can be run by lab technicians. The collection device is placed on a rack that fits into the analyzer. The instrument pierces the sample-collection device, transfers the patient specimen to a cuvette, and completes testing. “If necessary, the lab personnel will transcribe the printed results, but the system can also read bar codes and communicate with a laboratory information management system when interfaced,” says Oldham. The answer is standardized and will not differ with the test performer.

Money in the Bank
The automation offers typical advantages, such as greater efficiency and more time for personnel to focus on tests requiring hands-on activity. With a small footprint, the instrument is intended for use in all laboratories, not just reference labs. 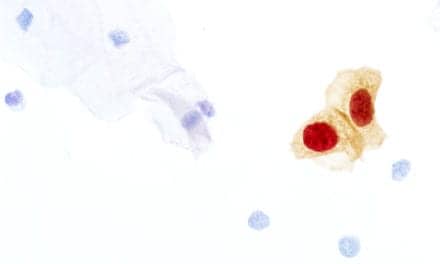