A new study published in the Journal of Cardiac Failure shows that the prognostic value of ST2, a heart failure biomarker, remains steady even in patients also suffering from renal insufficiency. The levels of other natriuretic peptide biomarkers fluctuated in patients suffering from both heart failure (HF) and renal insufficiency—two conditions increasingly coexisting in an aging American population.

The study followed 879 HF patients over a 3-and-a-half-year period and tracked the accuracy of ST2 against the performance of BNP and NT-proBNP, two other natriuretic peptide biomarkers. In New York Heart Association class III-IV patients, drops in estimated glomerular filtration rate (eGFR), a measure of proper kidney function, raised NT-proBNP serum concentration. In contrast, lowered eGFR had no impact on ST2 levels. The addition of ST2 also helped net reclassification rates, with kidney failure patients experiencing a higher success rate of 16.6% compared with the average population.

According to the American Heart Association, 5 million Americans currently suffer from heart failure, with the number of those affected expected to jump to 8 million by 2030. More than 60% of these patients, a study of 100,000 patients found, also suffer from kidney disease. The coexistence of the two conditions is known as cardio-renal syndrome.

“While natriuretic peptide biomarkers such as BNP and NT-proBNP have become the accepted standard for diagnosing heart failure, their use presents challenges, particularly in this comorbidity ‘grey zone,’ where interpretation of results can be muddled,” said David Geliebter, CEO of Critical Diagnostics, creator of the ST2 biomarker assay. “This study proves yet again that ST2 is not only the most powerful chronic heart failure risk stratification tool available, and that unlike natriuretic peptide markers, ST2 is not adversely affected by confounding factors such as age, body mass index and impaired renal function.” 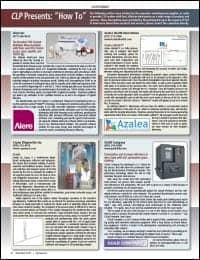 CLP Presents: “How To”