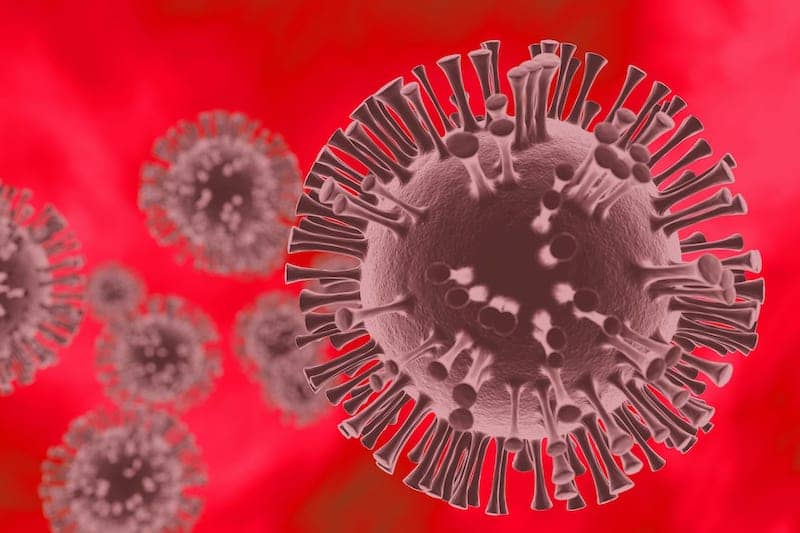 A new point-of-care diagnostic device that can simultaneously detect the presence of both SARS-CoV-2 RNA and antibodies against the virus in a patient’s saliva, and potentially multiple other biomarkers, was created by members of the Wyss Institute for Biologically Inspired Engineering at Harvard University.

“This diagnostic can enable cheaper, multiplexed monitoring of infection and immunity in populations over time, at levels of accuracy that are comparable to expensive lab tests,” says co-first author Devora Najjar, a graduate student at the MIT Media Lab and the Wyss Institute. “Such an approach could dramatically improve the global response to future pandemics, and also provide insight into which treatment individuals should receive.”

The new technology combines the Institute’s eRapid and SHERLOCK technologies into a single, postcard-sized system. The prototype device is described in a new article published in Nature Biomedical Engineering.

Novel Chemistry for a Novel Virus

The diagnostic was born from a collaboration between the labs of Wyss Core Faculty members Jim Collins, PhD, and Don Ingber, MD, PhD, who is also the Institute’s founding director.

The eRapid team led by Ingber and Wyss Senior Staff Scientist Pawan Jolly, PhD, together with the SHERLOCK team led by Collins and Helena de Puig, PhD, a Wyss Postdoctoral Fellow, recognized that while SHERLOCK-based diagnostics can detect molecules with exquisite sensitivity, they were inherently limited by their fluorescence-based readout system.

If they could figure out a way to translate the molecular detection of a CRISPR-based system like SHERLOCK into an electrochemical signal like that produced by eRapid, they could create a diagnostic with lab-level precision that could be used in a non-lab setting. They started building this hybrid device and chose Lyme disease as their target application. Within a few months, they had gotten it to work.

Then the COVID-19 pandemic hit.

“In the early days, everyone was working on developing diagnostics that could detect either the SARS-CoV-2 virus or antibodies against it, but not both. We knew that we could successfully detect the presence of DNA and RNA molecules electrochemically, thanks to our work on Lyme disease. We decided to figure out how to multiplex that with antibody detection in order to create an all-in-one test to help track infections and fight the pandemic,” says de Puig, a co-first author of the paper.

But creating a platform that could integrate the detection of viral RNA and human proteins was a challenge. The team had to figure out how to perform two separate and very different types of molecular reactions simultaneously, then integrate them into one reporting system so that the results could be read at the same time.

They chose saliva as their sample material, because viral particles and antibodies can both be found there. For the SHERLOCK portion of the diagnostic, which detects the presence of SARS-CoV-2 RNA, the device needed to be able to extract, concentrate, and amplify viral RNA from a saliva sample, then mix it with CRISPR reagents and deliver the resulting solution to the eRapid chip portion for detection.

The team engineered a microfluidic system consisting of multiple reservoirs, channels and heating elements to automatically mix and transfer substances within the prototype device without needing input from a user. In the first chamber, saliva is combined with an enzyme that breaks open any viruses’ outer envelopes to expose their RNA. Then the sample is pumped into a reaction chamber, where it is heated and mixed with loop-mediated isothermal amplification (LAMP) reagents that amplify the viral RNA. After 30 minutes of amplification, a mixture containing SHERLOCK reagents is added to the chamber, and then the sample is pumped onto an eRapid electrode.

In the absence of SARS-CoV-2 genetic material in the mixture, single-stranded (ssDNA) molecules with biotin attached to them bind to a molecule called peptide nucleic acid (PNA) on the electrode’s surface. The biotin then binds to another molecule in the mixture called poly-HRP-streptavidin, which causes a third molecule, tetramethylbenzidine (TMB) to precipitate out of the liquid solution as a solid. When the solid TMB lands on the electrode, it changes its electrical conductivity. This change is detected as a difference in the amount of electrical current flowing through the electrode, indicating that the sample is free of the virus.

If any SARS-CoV-2 genetic material is present in the saliva sample, however, the CRISPR enzyme within the SHERLOCK mixture cuts it as well as the ssDNA. This cutting action separates the biotin molecule from the ssDNA, so that when the ssDNA binds to PNA, it does not trigger the series of reactions that causes the TMB to precipitate onto the electrode. Therefore, the conductivity of the electrode is unchanged, indicating a positive test result.

“The integration of the PNA-based assay with the poly-HRP-streptavidin/TMB reaction chemistry that we created for this device allowed us to detect the presence of SARS-CoV-2 with four times higher sensitivity than our original fluorescence-based SHERLOCK technology, and produced results in about the same amount of time,“ says co-first author Joshua Rainbow, PhD, a former Visiting Graduate Student at the Wyss Institute who is now a doctoral student at the University of Bath. “It was also able to detect the presence of viral RNA with 100% accuracy.”

Greater Than the Sum of its Parts

In parallel, the team customized the remaining three eRapid electrodes by studding them with different COVID-related antigens against which patients can develop antibodies: the S1 subunit of the Spike protein (S1), the ribosomal binding domain within that subunit (S1-RBD), and the N protein, which is present in most coronaviruses (N). If a patient’s saliva sample contains one or more of these antibodies, they bind to their partner antigens on the electrodes.

A secondary antibody that is attached to biotin will then bind to the target antibody, triggering the same poly-HRP-streptavidin/TMB reaction and causing a change in the electrode’s conductivity.

The researchers tested these antibody-specific sensors using samples of human plasma from patients who had previously tested positive for SARS-CoV-2. The system was able to distinguish between antibodies against S1, S1-RBD, and N with over 95% accuracy.

“Being able to easily distinguish between different types of antibodies is hugely beneficial for determining whether patients’ immunity is due to vaccines versus infection, and tracking the strength of those different immunity levels over time,” says Sanjay Sharma Timilsina, PhD, a former Postdoctoral Fellow at the Wyss Institute who is now a Lead Scientist at StataDX. “Integrating that with viral RNA detection in a portable, multiplexed diagnostic platform provides a comprehensive view of a patient’s health both during and after an infection, which is essential for implementing public policy and vaccination strategies.” StataDX is commercializing eRapid for neurological, cardiovascular, and renal applications.

Finally, the team tested the combined viral RNA and antibody electrodes using saliva from SARS-CoV-2 patients. They split the saliva into two portions, adding one portion to the antibody reservoir and the second portion to the RNA reservoir of the device. After two hours, they measured the electrodes’ readouts to see if they had correctly registered the presence of the antibodies and RNA.

The team found that the multiplexed chips correctly identified positive and negative RNA and antibody samples with 100% accuracy, at the same time. It was also ultra-sensitive, able to detect the presence of RNA down to 0.8 copies per microliter.

“Currently, there is a lack of low-cost diagnostic platforms that can enable accurate detection of multiple classes of molecules without requiring a trip to a lab. Our system offers the best of both worlds – high accuracy and low cost in a multiplexed platform – and could provide a lot of value to both patients and clinicians at the point of care. Plus, it’s easily adaptable to a wide range of applications,” says co-first author Jolly.

Further Benefits of the Device

The prototype device’s low cost and compact design is user-friendly and minimizes the number of steps a patient needs to perform, reducing the possibility of user error. Customized cartridges could be easily manufactured to detect antigens and antibodies from different diseases and could be fit into a reusable housing and readout device that a user would keep in their home.

“What excites me about this diagnostic device is that it combines a high level of accuracy with a flexible design that could make it a major tool in our arsenal for addressing future pandemics,” says co-senior author Collins, who is also the Termeer Professor of Medical Engineering & Science at MIT. In addition, Collins is a co-founder of Sherlock Biosciences, which is developing the Wyss Institute’s SHERLOCK technology into diagnostics for COVID-19 and other diseases.[BL1]

“I’m very proud of these teams for coming together during a global crisis that ground most activity to a halt, and creating something new and useful that offers great promise for point-of-care diagnosis and management of a broad range diseases around the world,” says co-senior author Ingber, who is also the Judah Folkman Professor of Vascular Biology at Harvard Medical School and Boston Children’s Hospital, as well as the Hansjörg Wyss Professor of Bioinspired Engineering at the Harvard John A. Paulson School of Engineering and Applied Sciences. 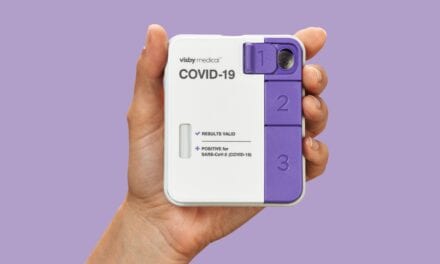 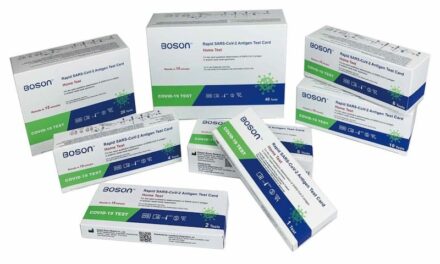 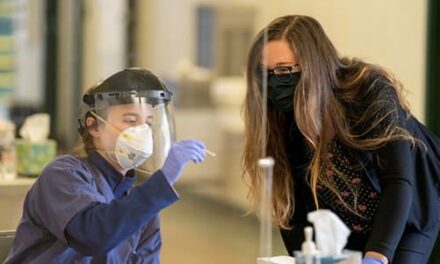