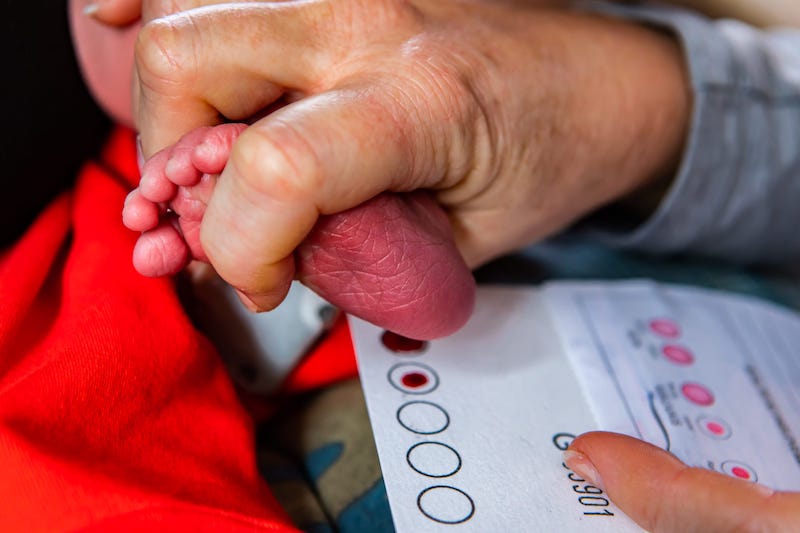 The biggest challenge with the diagnosis of congenital CMV in newborns is that it is impossible to predict with 100% certainty which babies have been infected unless the newborn is tested within 21 days from birth.

Congenital cytomegalovirus (cCMV) is the most common cause of non-genetic hearing loss in newborns. It is the most prevalent prenatal viral infection and the incidence is extremely high, affecting six out of every 1,000 newborns1, and yet it has the least level of awareness among adults in United States (6.7%)2. Lack of awareness is one of the challenges that congenital CMV faces given that one of the first steps toward disease prevention comes from pregnant women following recommended hygiene practices2.

While cCMV infection is more prevalent than the incidence of all 29 disorders combined that are included in the universal newborn screening program1, not all institutions or states in the country have established protocols to routinely test for congenital CMV. The absence of a screening protocol for cCMV allows for 90% of the CMV-positive babies to go undetected as they are asymptomatic. Of the remaining 10% who are symptomatic, a portion will be missed because either they will not get tested for cCMV or the testing is not performed within the first 21 days of life. Testing beyond 21 days can reflect an acquired or perinatal infection. Approximately one in five babies born with cCMV will develop permanent disabilities such as hearing loss, microcephaly, vision loss, cerebral palsy, seizures, or cognitive impairment2. Delay in diagnosis and initiation of intervention puts children at increased risk for speech, language and learning delays with 3%-8% of the cCMV-positive infants developing late onset hearing loss1.

The biggest challenge with the diagnosis of congenital CMV in newborns is that there is no way to predict with 100% certainty which babies have been infected by the transmission of CMV from mother to fetus unless the newborn is tested within 21 days from birth. In contrast to other congenital infections like rubella and toxoplasmosis, maternal immunity to CMV does not protect the fetus from acquiring cCMV. Therefore, transmission can happen as a result of a maternal primary or a non-primary CMV infection during pregnancy3. A higher maternal seroprevalence is associated with an increased prevalence of cCMV, suggesting that nonprimary infection plays an important role in contributing to the burden of cCMV13. Hearing loss frequency and severity of infants born with cCMV are similar for babies born from mothers with primary infections and non-primary infections. cCMV senso-neural hearing loss (SNHL) ranges from 22% to 65% in symptomatic babies, and 6% to 23% in asymptomatic ones. CMV infection has been shown to be responsible for 33% of all cases of permanent hearing loss3.

There are indicators that can help predict or anticipate potential transmission of infection, including a mother with a primary infection in the first trimester or a reinfection/flair-up in the last trimester, but unless the baby is tested at birth there is no way to confirm transmission of the infection to the baby. Therefore, the adoption of universal testing for congenital CMV makes sense. Unfortunately, universal testing for congenital CMV has not been widely adopted. What is most often seen is the adoption of targeted testing. Targeted testing is for babies that fail their newborn hearing screen (NHS). As an extension of targeted testing there are some institutions that also test babies for cCMV with at-risk factors or with sign and symptoms that are commonly associated with cCMV infection.

Targeted testing of babies that fail their newborn hearing screen is a step in the right direction to identify a higher percentage of cCMV-positive babies. CMV-positive babies are significantly more likely to fail the NHS (7%) compared with CMV-negative infants (0.9%)5. The challenge with targeted testing is that not all babies that are cCMV-positive have hearing impairment. A study by Fowler et. al.5, found that 43% of the CMV-positive babies were missed because they passed their NHS. In a recent study, of 39 babies diagnosed as cCMV-positive, 66.7% passed their NHS, only detecting 33.3% of the cases. The demographic of the positive babies included, 51.3% that were asymptomatic with normal hearing, 23.1% asymptomatic with hearing loss, and 25.6% were symptomatic at birth. In total 41% had SNHL6. A targeted approach for congenital CMV testing misses many newborn intensive care unit (NICU) babies, since not all NICU babies receive their NHS within the first 21 days of life. This has resulted in the recommendation for universal cCMV testing upon NICU admission7. Institutions that have adopted cCMV testing in the NICU based on a list of risk factors and/or symptoms associated with cCMV infection have found an increase in the incidence of cases and are able to detect cCMV-positive babies that otherwise may have been missed8.

Since 2016, the signs and symptoms approach has been implemented in two large birthing hospitals and three NICUs in Utah. Out of 754 cases, 21 have tested positive for cCMV (2.8%). The results indicate that 12 symptomatic infants were diagnosed with congenital CMV, and without this program may not have been diagnosed appropriately1.

In New York, two hospitals at one medical center with two tertiary care newborn nurseries and NICUs established a quality improvement initiative for the improvement of cCMV screening. The outcome of the intervention increased the screening rate from 22% (baseline) to 74% in a one-year study period. The established serial interventions as part of the initiative, resulted in the identification of four infants with congenital CMV which received appropriate treatment as a result of these interventions8.

Universal testing is the best approach to detecting the vast majority of congenital CMV cases. Universal testing provides the opportunity to treat symptomatic babies (moderate to severe) promptly and accurately. It allows for asymptomatic babies to be treated if they fail their NHS and/or given follow-up and set for monitoring as they can develop late onset hearing loss. Hearing loss can progress and/or fluctuate during infancy. Data shows that 5%-38% of both symptomatic and asymptomatic infants with normal hearing tests at birth could develop hearing impairment during follow-up3.

Testing for congenital CMV is best achieved by using a nucleic acid amplification test (NAAT) in place of traditional viral culture. NAATs have been demonstrated to have high sensitivity and specificity, and can be used with saliva, urine, or blood (dried blood spot). Each sample type has its advantage and disadvantages.

Many laboratories performing tests for congenital CMV are sending out or using laboratory-developed molecular tests. In both instances the turnaround time to results may take multiple days and results often get back after the baby has been discharged. In the event of a positive result the institution is left with the challenge of tracking down the baby/family to bring them back for additional testing and/or consultation.

The Challenge of Universal Screening

Adoption of universal screening has been in part hindered by the belief that it would put too high of a demand on the health system and concerns about affordability. As we move forward with saliva becoming the sample of choice and with more molecular tests becoming available, the adoption of universal testing by laboratories should be manageable.

Currently there is only one molecular test cleared by FDA for congenital CMV testing using a saliva sample from newborns up to 21 days from birth. Alethia CMV by Meridian Bioscience, provides results in less than one hour and utilizes a small bench top instrument. The test has moderate CLIA complexity and is simple enough that can be performed in any area of the laboratory. The clinical performance was evaluated using over 1,500 samples, with a positive percent agreement of 100% and a negative percent agreement of 99.8% compared to two different PCR assays and bi-directional sequencing.15,16

Increase in testing demand can be handled without major disruption of the laboratory’s workflow. The Alethia instrument can perform 1-10 samples per run. A full run takes approximately 50 minutes (1 minute of hands-on time per sample plus 40 minutes of run time)16. In a high-volume facility, the instrument can run 80 samples in an 8-hour shift. As an example, an institution that has 8,000 deliveries per year can get all their testing done in three runs per day (24 samples/day). This test allows for the physician and the parents to get the results back before the baby goes home. By getting results so promptly, in the event of a positive result, the baby can be treated while still in the hospital under supervised care and/or referred to appropriate follow-up care.

Congenital CMV has been associated with a substantial increase in healthcare resource utilization and economic burden during early childhood, particularly during the first year of life. During the first year these babies are two times more likely to have hospital admissions, a higher number of pediatrician visits, audiology evaluations and tests, and cranial ultrasounds.17 In a recent study looking at health insurance claims in the United States the adjusted cost for infants with presumed cCMV were 4 times higher those of the uninfected control.18

Currently in the United States only the state of Minnesota has passed legislation requiring universal testing for cCMV. There are nine other states with legislation that requires targeted testing (cCMV testing after failing one or two of the newborn hearing screens). There are a fair number of other states that have pending legislation or are in the process of adopting legislation19. As congenital CMV awareness increases, more data is generated highlighting the importance of early detection, and more information regarding treatment outcomes among newborns becomes available, it is expected that the number of states with legislation requiring cCMV newborn screening will continue to grow.

As we move forward the hope is to overcome the challenges surrounding congenital CMV diagnosis with universal testing as the goal. Early diagnosis, followed by treatment if necessary and/or monitoring are key to a favorable outcome for a cCMV-positive child.

With 40 years of experience in IVD at Meridian Bioscience, Frances C. Esteve (AW) is currently a marketing product manager with Meridian Bioscience. She has held positions in product research and development, manufacturing, as an ASQC certified quality auditor, and international sales. 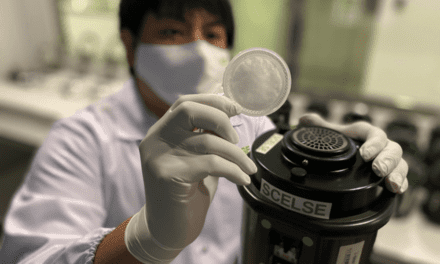 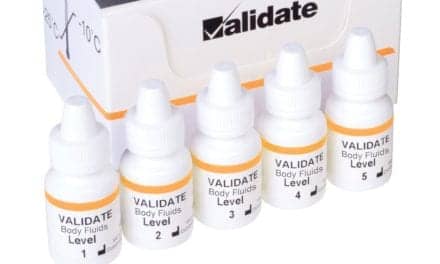 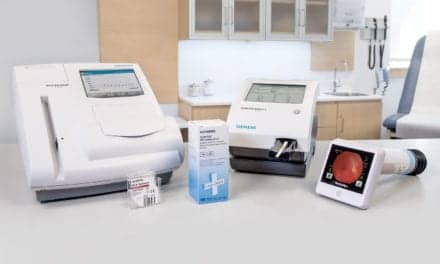