A “Frist”-hand View of Health Care 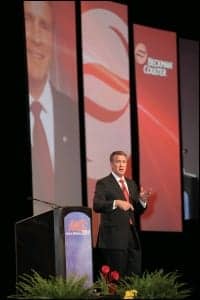 Before the plenary talks, poster sessions, and clinical lab expo got under way at the American Association for Clinical Chemistry’s (AACC) annual meeting, a room full of conference early-birds filed into the Anaheim Convention Center’s spacious third-floor ballroom to hear former US Senate majority leader Bill Frist, MD, (R-Tenn) deliver his keynote address centered on solving the world’s most intractable problems at the AACC Partnership Presentation, supported by a grant from Beckman Coulter.

Best known for his tenure as Senate majority leader from 2003 to 2007, Frist is also a trained transplant surgeon, the author of seven books, and a consistent presence on Modern Healthcare magazine’s list of the most powerful people in health care in the United States.

Appropriately enough, Frist began his talk by stressing that in any discussion of the world’s gravest, most intractable problems, “many of them come back to health care.”

Against a backdrop of alarming graphs and charts, visualizing a rising national debt in no uncertain terms, Frist spoke of the high proportion of federal funds spent on health care programs like Medicare, Medicaid, and Social Security and the high costs Americans may soon be paying for them.

Threading the discussion back to the diagnostics industry, Frist encouraged laboratorians to extend their reach outside of the lab by connecting with clinicians and becoming more involved in the decision-making process, given how heavily diagnostics can influence treatment decisions.

“Labs, you are in a position you haven’t yet maximized,” he told attendees. Amid the flurry of statistics Frist blanketed the audience with, one in particular brought home the point: While lab diagnostics influence roughly 80% of all health care decision-making, the clinical lab industry receives only between 2% and 3% of the overall health care spending pot. “When there is a call to action,” he said, “the call to action is to you in this room.”

As health care turns increasingly to the clinical lab for answers, Frist also stressed the need to add value—not just volume—to lab testing, which he hopes will trend toward a greater role for personalized medicine. “If you’re really looking to maximize efficiency, you have to have to the personal approach,” he said.

Then, taking the focus off the familiar tug of war between the health care industry and lawmakers, Frist ended the talk by tackling some of the more pressing problems throughout the world, showcasing his medical mission work in badly battered post-quake Haiti and in New Orleans in the days directly following Katrina. Here again, Frist renewed his call to action and suggested that lab workers consider donating to worthy causes or volunteering on medical mission trips as the surest way to make a difference.

In June 2009, Frist took an even more direct role in diagnostics when he joined the board of Nashville, Tenn-based forensic chemical and drug-testing laboratory Aegis Sciences Corp, where he also serves as an adviser. Shortly after his keynote address wrapped, Frist spent some time with CLP to share his thoughts on the future of this rapidly changing sphere within the overall clinical lab space, as well as some key insights into the future of personalized medicine.

Citing increases in drug abuse, as well as narcotic and synthetic narcotic use, Frist sees a strong future for the toxicology industry. “Toxicology testing will be, I think, increasingly important both in and outside of the pain management drug abuse arena,” he says.

And as its importance grows, test manufacturers will look to emerging technology to keep ahead of drug and narcotics users seeking to skirt detection. Advances, therefore, may come in a variety of areas, including finding the best sample types to receive the most accurate results, whether it is serum, saliva, or urine. “In the short term, I think there will be increasing breakthroughs in the way we collect samples,” he says. “I think there will be a whole burgeoning field in this whole saliva versus urine testing.”

Looking even further ahead, Frist spoke of the likelihood of a more personalized approach taking root. “The next best big arena,” he says, “will involve using DNA and genetic-type testing” to learn which individuals may be prone to the abuse of certain narcotics and how they metabolize.

Today, across all segments of the diagnostics industry, a future where personalized medicine plays a greater role in patients’ health seems almost a foregone conclusion. According to Frist, this blossoming of personalized approaches will likely also necessitate a shift in evidence-based medicine, making it more personal, specific, and ultimately more affordable.

“You can’t screen 300 million people for everything,” he says. “You need to screen a subset of that for prevention of illness to be cost-effective. If it can’t be proven cost-effective today, it probably won’t stand the test of time given the fact that resources are limited.”

Since outcomes will still require substantial data from clinical labs, Frist sees not only growth for the clinical lab industry, but a growing influence for them as well. “Once you say that evidence-based medicine—which requires a strong laboratory component—be personalized, you elevate the importance of the laboratory sector significantly,” he says.

And as personalized medicine advances, Frist sees in the future a more patient-centered health care system developing—another benefit for labs. “The future of health care reform, the future not captured in the measures and legislation, involves a system that is patient centered, provider friendly—that is based on really three things,” he says. Principally, they include: a combination of 21st-century technology and innovation, some element of choice, and a measure of control or accountability built into the choices made.

“In that model, to have it fully integrated, it means you move from a volume-based system to a value-based system,” he says. “The fact that the laboratory sector costs only 3% in terms of the health care dollar, but has an impact and guides 80% percent of all decisions that are made that determine the outcome of that patient, puts the laboratory sector right at the core of a fully integrated model.”

The challenge for labs will be learning to speak up not only in their own hospitals, but also as a collective industry with a unified voice to ensure that the changing health care landscape develops with the industry’s critical input taken into consideration. “It’s important that the policymakers in and outside of government don’t ignore” the specialty and regional labs, Frist says. “Their voice—and I say this wearing my policymaker hat—is not as loud or as prominent as the major labs, [but] so much of the specialty care is dependent on it, and so much innovation comes out of the regional and specialty labs.”

Looking to AACC in Anaheim