Rates of visits by the elderly to emergency departments are increasing more rapidly than for any other group, which could lead to catastrophic overcrowding as the ranks of patients over the age of 65 swell, according to a study in the Annals of Emergency Medicine.

Researchers who studied emergency department visits from 1993 through 2003 found the visit rate per 100 people age 65 and older increased faster than the visit rate for other age groups, with an overall increase of 26% over the 11 years of the study. People aged 65 and older are the fastest growing segment of the US population.

“Seniors are using the emergency department more and more frequently, and given the needs of this population and the nature of their medical problems, the current state of overcrowding is likely to continue to escalate dramatically,” said Mary Pat McKay, MD, of the George Washington University Medical Center, Washington, DC.  “These patients tend to be sicker and are more likely to be admitted from the emergency department to the hospital, but with many hospitals running a deficit of inpatient beds, I don’t see where these patients are going to go.”

Annals of Emergency Medicine is the peer-reviewed scientific journal for the American College of Emergency Physicians, Dallas, a national medical society with more than 25,000 members. The study is titled “Increasing Rates of Emergency Department Visits for Elderly Patients in the United States, 1993 to 2003.”

As emergency patients, the elderly use the most resources, stay the longest, and are the most likely to be admitted to the hospital of all emergency patients. Researchers found that emergency department visits nationwide for patients between 65 and 74 could nearly double from 6.4 million in 2003 to 11.7 million by 2013.

The study finds the additional emergency department visits over time were not less urgent than at the beginning of the study, and suggests older Americans are having more true emergencies, rather than increasingly visiting the emergency department for convenience or because of lack of access to nonemergency outpatient care

John Rother, policy director for AARP, said it is important to learn why emergency room use by older people is on the rise and why patients may not be getting care from their personal physicians. Elected leaders should heed the warnings in the survey and recognize the health care system needs to deliver quality, affordable care in the most appropriate, cost-effective setting, he added.

McKay said that if the trend continues for elderly patients over the next few years it could cause the emergency care system to collapse. Patients are boarding in hallways, sometimes for several days.

“At this rate, I could see patients waiting in the street because there just isn’t any more room,” he said. 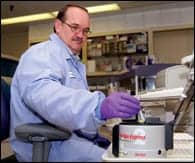