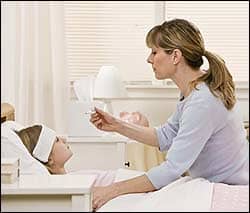 Back to SPECIAL SECTION index

Recent steps to combat respiratory viruses include the granting of $350 million by the federal government, which was signed into law recently by President Barack Obama.

“With flu season around the corner, we must remain vigilant and do all we can to prepare our nation and protect public health,” said Health and Human Services Secretary Kathleen Sebelius. “These grants will give states valuable resources to step up their flu-preparedness efforts.”

The Hospital Preparedness grants enhance the ability of hospitals and health care systems to prepare for and respond to public health emergencies. However, the expected onslaught of flu in the fall flu season still means physicians and labs must deal with the slower speed of such molecular tests as the polymerase chain reaction (PCR) and lateral flow’s limited sensitivity of no greater than 90% to 95%. According to Norman Moore, director of clinical affairs for Inverness Medical, Princeton, NJ, that level of specificity is usually good enough so that people feel confident in positives and can prepare to deal with the large number of expected cases the best they can. Meanwhile, though, many companies are expending massive amounts of time, effort, and money to come up with new technology that offers both speed and sensitivity.

But the solution, while inevitable, hasn’t yet been found, says John Tamerius, PhD, senior vice president of clinical and regulatory affairs at Quidel Corp, San Diego. This is a particular concern with the nation and world possibly facing an even more severe flu pandemic.

Cost-effective molecular-based tests at the point of care offering speed in identifying and treating flu strains is vital, Moore adds, since antiviral drugs are effective only within a 48- to 72-hour window of the onset of symptoms. But despite a rush to produce vaccines and improve diagnoses, there’s no new solution to the speed versus sensitivity problem. “Nothing combines both speed and sensitivity, although Inverness and many others are trying to develop new technologies,” Moore says.

Most years, labs are happy with the rapid results for flu, but some want greater sensitivity—and that is more the place for PCR, Moore says. PCR can’t be done at the patient bedside; the sample has to be brought to a lab, which may mean a significant amount of time to get the final result to the patient. There’s a need to bring technology closer to patients so samples can simply be transported down the hall to a lab, and to establish more walk-in labs, says David Persing, MD, PhD, executive vice president and chief medical and technical officer at Cepheid, Sunnyvale, Calif. “To maximize medical impact, rapid results are needed to inform patient isolations and antiviral treatment decisions. Cepheid has technologies that are adaptable to decentralized testing,” he notes.

What’s done with samples after they’re taken is extremely important, Tamerius agrees. Even with rapid tests like Quidel’s, which provide results in 5 to 10 minutes, samples sometimes first have to be transported to central labs and away from the point of care, near the patient setting where they were obtained. Often the sample is transported in viral transport media that dilutes the specimen, making viruses more difficult to detect.

“That’s not a big deal for PCR samples, because amplification of the genomes by 10, 15, or 20 cycles (literally millionsfold) makes the virus detectable. But for rapid antigen assays, diluting the sample can reduce the concentration of viral antigen and decrease the apparent sensitivity of the test. The most optimal way to perform a rapid test is on freshly collected samples, without dilution, and as quickly after collection as possible,” Tamerius says.

And sample collection/handling and sample transport also are important. “It’s critical that nurses and technicians know what they’re doing,” he says. If a sample is taken improperly or from the wrong location, it diminishes the apparent accuracy of the test. “Most health care professionals are good at taking throat swabs, and there’s a natural propensity to do so, but even though that’s the easiest way to obtain a sample, it’s not the best place to obtain one. Influenza viruses generally do not grow in the throat. If they are found there, it is usually the result of having washed there in mucus and other secretions from the nasopharyngeal compartment,” Tamerius says. It’s better to take a nasal swab or nasopharyngeal swab for both rapid test and culture, and, in fact, Quidel refuses to place throat swabs in its testing packages and does not recommend the practice.

But if there is a large flu pandemic, physicians may stop testing entirely and just treat possible flu patients as if they have it, Moore says. However, the unintended consequence of treating everyone with antivirals is that it might well cause resistance to the drug.

Doing multiple tests is a different problem from combining speed and sensitivity. In the case of RSV, the sensitivity for some lateral flow tests is quite good and only one test is needed. For example, RSV in premature babies requires several tests (several tests are sometimes needed if looking for several things like flu and RSV, not when just running RSV), so researchers are seeking technologies capable of performing multiple tests simultaneously, Moore says. But even the most sensitive tests, he says, still lack speed.

An Early Start to the Season

Moore says this year’s flu season may start earlier than usual, a situation that the Centers for Disease Control and Prevention is monitoring closely. H1N1 cases were already beginning to present in summer, long before they should have. And although H1N1 and other flus are set to present a formidable challenge in the flu season that’s already begun, H1N1 did reveal some huge shortcomings in the testing system when it broke last year and overwhelmed many state labs, slowing results. For flu with a short treatment window, that’s a reason for concern.

It’s also important to remember that in the massive effort to prevent and treat H1N1, other respiratory viruses are still an urgent matter. In fact, says Jeremy Bridge-Cook, PhD, senior vice president, Assay Group, Luminex Corp, Austin, Tex, “There’s a strong likelihood of a ferocious flu season coming. The CDC estimates that 20 to 40 percent of the US population could be affected by some type of respiratory infection, a level two to three times as high as normal.”

While rapid methods have made a major impact on microbiological testing, very few have taken testing out of the laboratory. One that can, and is in widespread use as a result, is the lateral flow immunoassay test, also known as the immunochromatographic assay or strip test. Lateral flow immunoassays use sophisticated technology but are simple to operate.

Current molecular testing can assay for as many as 13 or more different respiratory viruses, Persing says. These assays are based on a platform test that can analyze multiagents and distinguish among them to determine which combination of viruses is present, he says.

“They all require central labs employing technicians with expertise and appropriate levels of quarantine and separation of amplified samples to prevent cross-contamination of samples,” Persing says. Some analyzers don’t offer that, and “particularly with H1N1, faster times to get results is necessary—while the patient is still present. Centralized labs are at odds with the fast turnaround times required.” Quidel’s test does offer rapid results but does not provide sensitivity to all strains of virus, Persing says.

What’s needed is rapid results—within 30 minutes or so—while the patient waits, and sensitivity, Persing says. A limited number of labs—about 500—have the capability to perform multiplex testing, but only a handful currently offer them, using Respex and Abbott assays. “There have been some inroads, but there’s a lack of labs and instruments to provide both rapidity and sensitivity, and that’s where the gap is,” he says.

Modern molecular testing for respiratory viruses must be fast and available on demand as each patient comes in, closer to an antigen testing format. Cepheid is working on a panel to do that, The GeneXpert system, a suite of seven FDA-cleared products that uses a cartridge requiring a low level of technical expertise because all testing is done within the cartridge. The cartridge carries out all the complex steps of nucleic acid extraction, PCR amplification, and multiple detection that normally require roomfuls of equipment and hours of technologist time.

This challenge is a significant hurdle, but the other significant hurdle—sensitivity and specificity—is not so much a challenge in molecular testing as in rapid immunoassay and DFA testing. There, Bridge-Cook describes sensitivity as “quite poor,” making it possible to obtain quick turnaround times but lots of false negatives, so there’s little effectiveness.

The xTAG RVP test requires the user to take a sample from a nasal swab and then extract the sample using the standard method. A PCR reaction is set up, after which bead technology from the LX200 instrument is used. “In our current assay PCR is done in two steps, but in the next generation it will improve upon that. It also features 12 targets, enabling simultaneous testing,” Bridge-Cook says.

This flu season, more than others, it’s also important to rule out those who don’t have swine flu, because swine flu patients have special treatment options and public health implications, and could infect other patients—or have something quite different from H1N1 altogether, he notes.

The xTAG RVP test was cleared by the FDA in 2008 to simultaneously detect 12 common respiratory viruses, including influenza A subtypes, metapneumovirus, and adenovirus. Luminex recently received clearance from the FDA to update the xTAG RVP label to include data demonstrating that the test can be an effective aid in the detection of the pandemic strain of influenza A. The test cannot specifically identify the pandemic H1N1 subtype, but it can help physicians distinguish patients infected with a common seasonal respiratory virus from those who are potentially infected with the pandemic strain.

Tamerius says that although Quidel’s QuickVue Influenza and QuickVue Influenza A+B tests are lateral flow tests, and even though the company is the US market leader in the point-of-care settings for rapid influenza tests, Quidel is also very interested in the potential of molecular diagnostic approaches. He notes that although PCR tests can be as much as 1,000 times more sensitive than the rapid antigen tests that exist today, the PCR test is much slower and much more expensive.

Meanwhile, the QuickVue rapid antigen test, unlike other rapid tests that take 30 minutes to provide results, can offer negative results in 10 minutes and positive results in 10 minutes or less, Tamerius says. He adds that factors such as the age of the patient (younger patients, for example, tend to secrete more influenza virus) and the length of time the sample is taken after onset of symptoms play an important role in the performance of rapid tests. Generally, the sooner after onset of symptoms that a flu test is given, the higher the apparent clinical sensitivity of the test. However, he notes, PCR tests will still detect virus nucleic acid material in patients even several days after the initial symptoms have dissipated and the patient has seemingly recovered.

Tamerius cautions that the PCR method allows the continued recycling and amplification of a viral genome until enough copies are there for detection. A rapid test does not do that; it detects what is present in the sample at that time—and much more quickly and at significantly reduced cost versus PCR.

GE, U of Washington to Develop Diagnostics-on-Demand Medical Device for Infectious Disease Detection