“Fooling around” with enzymes one day eventually led a scientist to developing the first new enzymatic testing method for ethanol in more than 50 years, according to U.S.-based Diagnostic Chemicals Ltd. (DCL), which is marketing the test.

DCL of Oxford, Conn., received Food and Drug Administration approval earlier this year for Ethanol L3K, a new, one-reagent method for testing serum ethanol levels, the blood test that determines alcohol levels in drunk-driving cases and has many other diagnostic applications.

The discovery process began in 1997, according to the lead developer, Dr. Richard A. Kaufman, founder and president of Specialty Assays Inc. of New Jersey. “I was fooling around with some NAD analogs one day. They have very unusual properties and tend to have better oxidation potential. I thought it would be nice to look at some tests where these could be useful and have a commercial application,” Kaufman said. “All the ethanol tests on the market today have to have two separate components, otherwise, it has very poor stability.”
Kaufman thought it might be possible to do the test with a single-vial liquid reagent. The stability of the normal enzyme co-factor NAD is limited by the rather high pH reaction at which it runs. He found the analogs he was looking at worked at a much lower pH level. “It was just a nice surprise that it worked very well,” he said.
He filed away the idea in the back of his mind and in some notebooks. Not long after that, he started working on a project with DCL. A few months into the project, he was asked by DCL if it were possible to do a single-vial ethanol reagent. Kaufman retrieved his notes and the development process began by mid-1997, eventually leading to FDA approval in late January.
The key to developing the test, according to Douglas Borses, retail diagnostics team leader for DCL, was getting a chemical reaction to run the other way, against its usual grain. In nature, alcohol dehydrogenase (ADH) is used by microbes to make ethyl alcohol, not break it down. That is why enzymatic ethanol methods that use NAD must be “encouraged” to proceed in the right direction (formation of NADH and H+), Borses said. In order to drive the reaction, the pH in the reaction vessel must be highly alkaline and aldehyde traps must be used. At these pH levels, ADH is unstable and rapidly becomes inactive. In addition, aldehyde trapping agents must be used to speed the reaction and keep it going the right way, he said.
To maintain the functionality of ADH, conventional ethyl alcohol methods must be separated into two parts. The NAD analog used by DCL in this patent-pending method differs from conventional NAD in several ways, Borses said. For example, this NAD analog favors the formation of acetaldehyde at a kinder, gentler near physiologic pH. It doesn’t require the harshly alkaline pH and aldehyde trapping agents that must be used to drive the reaction in conventional ADH/NAD reactions, he said. This is why a single-vial stable liquid reagent for ethanol can only be made with L3K technology. (L3K technology is DCL’s term for these types of chemical reactions that utilize these unconventional analogs.)
“The key thing here is that the test has always been a two-part reagent,” he said. “Generally, people prefer a single vial because there’s less prep time. It’s like orange juice; you can either grab a bottle or squeeze it yourself. In the stat lab setting, people don’t want to have to worry about the integrity of the reagent they are using.”

The overall testing process with L3K takes about three minutes compared to 15 minutes with many traditional methods. “It’s just a rather ingenious way to get better accuracy out of a standard lab test by stepping back, rethinking it and creating a molecule to make the process possible. And it allows you to use a single reagent,” Borses said.
In addition to its use with ethanol alcohol tests, the technology is applicable to any enzymatic assay in the laboratory, Borses said. “You have about a dozen clinical chemistry tests that depend on reactions that involve changing NAD to NADH or NADH to NAD, but they all revolve around states of oxidation or, more simply, taking hydrogen off or putting it onto a co-factor,” he added.
The company currently is developing a test for detecting ammonia levels in the blood. Other L3K technology chemistries on the market or in development include AST, ALT, BUN and bicarbonate.
DCL is a privately held company, headquartered in Prince Edward Island, Canada, with subsidiaries in the United States and Mexico. It was started in 1970 by Dr. Regis Duffy dean of faculty science at the University of Prince Edward Island.
David M. Templeton, DCL’s chief executive officer, set up the United States division in Connecticut in 1983 (Duffy is now chairman of the board). The company employs about 160 and has “enough capacity to supply most of North America with reagents,” Templeton said. DCL has about 150 different products, with 30 to 35 of those being definitive chemistries.
We set out to develop the single-reagent test for blood-alcohol levels, Templeton said. “To differentiate ourselves, we had to focus on something that made us stand out from the pack.”
DCL has done that with the ethanol L3K test, he said.
“We’re hoping this will be a new wave in clinical chemistry testing,” he said. “Many reagents could potentially use these analogs. It’s fairly significant, it’s the first major change in many years.” 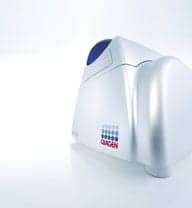