Physicians can best determine whether a woman has an aggressive or slow-growing form of breast cancer by testing the level of a protein in tumors that have spread outside the breast, suggests preliminary research presented at the 2012 American Society for Clinical Pathology (ASCP) Annual Meeting.

Ossama Tawfik, MD, PhD
The Ki-67 protein is a tumor marker commonly used to detect aggressive cancers of all types. The new research found that by measuring the levels of Ki-67 in tumors that have spread beyond the breast into the lymph nodes, physicians can much more accurately predict whether the cancer is fast- or slow-growing than if they only measure Ki-67 levels in the primary tumor in the breast.
“Some patients with cancer that has spread beyond the breast can live for 20 years or more,” says Ossama Tawfik, MD, PhD, senior author of the study and director of anatomic and surgical pathology for the Department of Pathology and Lab Medicine at the University of Kansas Medical Center, Kansas City, Kan. “Our results suggest we now have a better way to predict the behavior of the cancer. This will help doctors design the most appropriate therapy for each patient.”
In the study, for each of 103 women with breast cancer, researchers tested Ki-67 levels in both the primary breast tumors and in tumors that had spread to the lymph nodes. In most cases, the level of Ki-67 was similar in the primary and lymph node tumors: women who had low levels lived longer than those who had high levels. However, six of 34 women who had low levels of Ki-67 in the primary tumor had high levels of Ki-67 in the lymph node tumor, and didn’t live as long. Conversely, 12 of 69 women who had high levels of Ki-67 in the primary tumor had low levels in the lymph node tumor and had better overall survival. The results showed that measurement of Ki-67 in tumors in the lymph nodes might be superior to its evaluation in primary tumors.
“The findings are important, because they suggest some women are receiving less aggressive treatment than they should, and other women may be getting treatment that is overly aggressive,” says Kareem Tawfik, MD, lead author of the study and a resident at the University of Cincinnati. “If our findings are confirmed, we hope it will stimulate others to investigate this concept in other cancers and design therapies tailored to target specific tumors.” 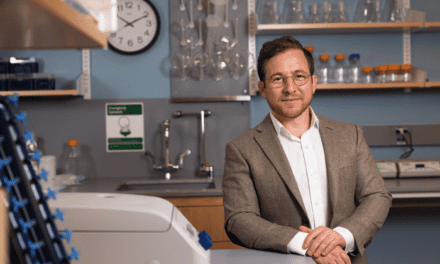