The number of pharma-Dx partnering agreements is growing by leaps and bounds. Here’s a brief summary of some recent agreements announced by CLP and other news services:

According to company sources, Seattle-based Adaptive Biotechnologies is currently working with more than 15 biopharmaceutical companies, but only four of those partnering agreements have been publicly announced: Johnson & Johnson, Bristol-Myers Squibb, Biogen Idec, and Medimmune. Under the agreement with Johnson & Johnson, Adaptive will use its patented immunology profiling assay, immunoSeq, to enable an in-depth characterization of the immune response to diseases being studied, and to select immunology and oncology drugs being developed by Janssen Research and Development LLC. The partners believe that exploration of immune responses may identify patient populations more likely to respond to targeted therapies based on their immune status. 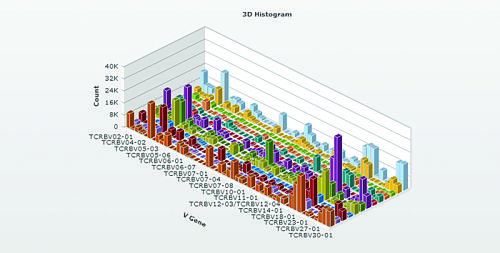 In addition to oncology, Adaptive is also working with biopharmaceutical partners in such areas as immune disorders, shared T-cell receptors, infectious diseases, and hematology. Specifically, in the area of hematology, Adaptive Biotechnologies currently markets a CLIA-certified diagnostic assay called clonoSEQ for measuring minimal residual disease. Applied to the treatment of leukemia, the assay can detect small numbers of leukemic cells that remain in a patient during and after treatment, and thereby help to predict relapse earlier and more accurately in patients with blood cancers.

Dako, an Agilent Technologies company with corporate headquarters in Glostrup, Denmark, announced in January that it had entered into a master framework agreement to develop companion diagnostic tests for oncology drugs currently in Merck’s development pipeline. “Dako is relentless in its commitment to fighting cancer,” said Jacob Thaysen, vice president and general manager for Agilent’s diagnostics and genomics business. “With Dako’s wide experience in companion diagnostics and its expanded playing field as part of Agilent’s life sciences and diagnostics group, I see great potential in this new agreement.”

The market for companion diagnostics is steadily growing, as personalized medicine may improve patient care and manage healthcare costs by targeting treatments to individuals more likely to benefit from specific therapies. Dako collaborates with many top-tier pharma companies to develop companion diagnostics, with long-term partnerships with companies such as Bristol-Myers Squibb and Genentech, a member of the Roche Group.

Freeno.me is a project that hopes to enable earlier cancer detection through development of a software platform to detect and monitor cancer at disease stages where clinical benefit can be gained. The project was co-innovated by Thiel Fellow Riley Ennis and Loxbridge Research, a London-based investment and project-management company.

The project’s clinical insights build on emerging evidence of cell-free circulating DNA and its potential as a novel biomarker. It combines proprietary software architecture being generated by Freeno.me with Loxbridge’s experience in cell-free DNA to make interpretable and actionable information based on cell-free DNA biomarkers available to researchers, clinicians, and, eventually, patients.

Freeno.me was recently named one of five healthcare category winners of the Verizon Powerful Answers award. As part of the award, Freeno.me received $700,000, to be used as seed funding for the project and for recruitment of staff and further development of the data analysis software platform.

In January, San Diego-based Illumina entered into an agreement with Amgen to develop and commercialize a multigene, next-generation sequencing-based test as a companion diagnostic for Vectibix (panitumumab), a fully human anti-EGFR monoclonal antibody therapeutic for the treatment of metastatic colorectal cancer approved in the US and EU. The collaboration will seek to validate a test platform that can identify the RAS mutation status of patients who would be appropriate to receive Vectibix. 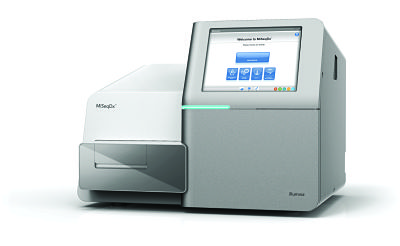 The MiSeqDx by Illumina is a next-generation sequencing instrument that has been cleared by FDA for in vitro diagnostic applications.

Under the terms of the collaboration, the partners will file a premarket approval (PMA) application to FDA, and will also seek market clearance from other regulatory bodies. The test will be developed for use with Illumina’s MiSeqDx instrument, which was CE marked for the European Union in July 2013 and received FDA premarket notification (510(k)) clearance for use in diagnostic applications in November 2013.

Following CE marking and FDA approval, Illumina plans to commercialize the test with a focus on US and EU markets. This collaboration also demonstrates Illumina’s commitment to partnering with therapeutics companies and to bringing its leading NGS technologies into oncology care.

NantBioScience, Los Angeles, is a subsidiary of NantWorks LLC that focuses on the discovery and development of innovative treatments for diseases with high unmet medical needs. In January, the company announced a strategic collaboration with Celgene to advance research programs to benefit cancer patients in need of new therapeutic solutions. As part of the transaction, Celgene will pay $75 million in funding to NantBioScience as an upfront option fee and equity investment.

Rosetta Genomics Ltd, Princeton, NJ, is a developer and provider of microRNA-based molecular diagnostics. In January, the company signed a master service provider agreement with an undisclosed major global biopharmaceutical company under which Rosetta will provide its microRNA profiling and other services pursuant to a collaboration in important areas of unmet medical need utilizing a novel therapeutic approach.

According to Kenneth A. Berlin, Rosetta Genomics president and CEO, Rosetta will use its microRNA expertise and capabilities to advance research and development efforts on this important, novel therapeutic approach. Berlin said that in addition to its current cancer testing services and new products from its own, internal research and development initiatives, collaborations such as these represent the company’s third major platform for revenue growth. Rosetta expects to enter into additional similar agreements as it seeks to monetize its microRNA platform and expertise, he said.