The company now has nearly 100 medical facilities and several distributors transacting online. The added customers represented an increase of more than 7 percent in April. This coincides with the site’s recent award nomination by the Biomedical Marketing Association (BMA) for best Web site design in the category of companies selling in excess of $50 million annually.

BMA is a nonprofit organization that includes nearly 800 marketing and management professionals involved in marketing diagnostics and other medical products or services.

“The progress we are making continues to exceed our expectations,” said Catherine Burzik, president, Americas, Ortho-Clinical Diagnostics. “By year end 2002, we expect a significant amount of our dollar volume will be derived from our e-commerce portals.”

Meridian files patent describing correlation of colic and H. pylori in infants
Meridian Bioscience, Inc., (Nasdaq:VIVO) of Cincinnati recently announced that it has filed both a U.S. Patent Application and an International Application under the Patent Cooperation Treaty directed to the diagnosis of Helicobacter pylori (H. pylori) associated

colic in infants and its treatment with antibiotic and other therapies. H. pylori infection also has been implicated in gastroduodenal disease such as peptic ulcers, gastritis and stomach cancer.

Colic is one of the most common problems in infancy affecting over 700,000 children (and consequently their families) each year in the United States. Normally, colic in young children cannot be attributed to any particular cause. There are numerous “old wives tales” regarding its cause. Teething and food allergies have been two commonly suspected causes. The inability to determine the cause of this condition is frustrating to pediatricians and parents alike. Working with researchers at a leading East Coast hospital, Meridian has been able to clearly demonstrate the correlation between H. pylori infection and colic symptoms in infants. Since 1991, Meridian has been developing and distributing rapid tests for H. pylori, the recognized cause of most stomach ulcers.

“Over the last few years the medical community has recognized that bacteria are associated with conditions such as heart disease and ulcer formation,” said John A. Kraeutler, president and chief operating officer of Meridian. “Similarly, recent studies have shown that infection with H. pylori bacteria has been implicated in as many as 45 percent of infants suffering from colic. Our new invention describes methods to test for H. pylori infections in infants with colic. The invention also provides for treatment methods to eradicate the H. pylori infection. We are pleased to be on the cutting edge of these discoveries hoping to help relieve infants’ discomfort.”

The campaign, Screen Together, Live Together, was conducted at the California capitol in April and included free mammograms for women. The mammograms were sponsored by San Francisco-based Chevron Products Co.

“If the disease is detected early enough, there’s a much greater chance for survival,” said Ernie Bodai, MD, director of breast surgical services at Kaiser Permanente in Sacramento and founder of Cure Breast Cancer. Dr. Bodai is also a prostate cancer patient.

The American Cancer Society recommends that men age 50 or older who have a life expectancy of at least 10 years undergo prostate cancer screening annually. Men at high risk should begin testing at age 45. Men in high-risk groups include African Americans and those with a family history of the disease.

Prostate cancer accounts for about 11 percent of male cancer-related deaths and is the second leading cause of cancer death in men. Approximately 198,100 new cases of prostate cancer will be diagnosed in the United States during 2001, according to the American Cancer Society.

Prior to the introduction of testing for prostate specific antigen (PSA), two-thirds of prostate cancers were discovered after they were incurable. Thanks to PSA testing, doctors now can catch most prostate cancers before they spread beyond the prostate.

Bill would establish fair payment for new clinical lab tests
In May, H.R. 1798 , the "Medicare Patient Access to Preventative and Diagnostic Tests Act," was introduced in the House of Representatives by Rep. Jennifer Dunn (R-Wash.). A companion bill sponsored by Sen.Orrin Hatch (R-Utah) was scheduled to be introduced as CLP went to press. If passed, this legislation would be of enormous benefit to clinical laboratories and medical device manufacturers and patients.

The bill is based on a number of important recommendations made by the Institute of Medicine’s (IOM) Report on Medicare Part B Payment Methodology for Clinical Laboratory Services ("IOM Report") released in December 2000. It marks the first step toward implementing those recommendations.

Several laboratory organizations worked toward and support the legislation. The Advanced Medical Technology Association (AdvaMed), working closely with CLMA: Leadership in Clinical Systems Management (CLMA) and other members of the Clinical Laboratory Coalition (CLC), created the opportunity for the legislation to be introduced.

Provisions of the bill include:

CLMA, which represents more than 6,200 laboratory managers, physicians, and consultants, played a critical role in the IOM Study for Medicare Part B Payment Methodology. Its leadership formed an aggressive plan in 1997 with the goal of creating a more rational reimbursement policy and successfully lobbied Congress in FY1998 and FY1999 to secure funding for the year 2000 study. During 2000, CLMA provided key testimony to the IOM committee throughout the study process.

The change coincides with the opening and validation of its new state-of-the-art North America manufacturing center in North Carolina. The company’s proprietary line of safe blood and urine collection products for the United States and Canada are produced there. Recent surveys show that safety is the No. 1 concern among healthcare workers.

Greiner Bio-one’s Vacuette and MiniCollect tubes are used by thousands of laboratories to perform millions of tests each year. The Vacuette line is the most comprehensive, plastic collection tube offering in the world.

HPV-18 strain doubles death rate
The HPV-18 strain of the human papilloma virus doubles the mortality rate from cervical cancer when compared with cancers caused by the most common strain of the virus, HPV-16. The findings are reported in the April Journal of Clinical Oncology.

A population-based study confirmed several earlier studies finding that mortality rates from cervical cancers caused by HPV-18 — the second most common cause of the disease — could be four times as high as those caused by other HPV variants, including HPV-16.

“I think this study potentially has very important clinical implications, as well as implications for basic research,” said Stephen Schwartz, PhD, primary author of the study and an associate member of the Fred Hutchinson Cancer Research Center in Seattle.

“This shows that those with HPV-18 should be considered for the most aggressive treatment possible,” said Harmon Eyre, MD, chief medical officer of the American Cancer Society.

HPV type testing is primarily used as a research tool.

“This was a retrospective study,” Dr. Eyre said. “What we need is a larger-scale prospective trial before it becomes standard of care.”

The U.S. FDA has approved a test for HPV as an adjunct to the Pap smear. A test to determine HPV type has not yet been approved, but one could be by the end of this year.

Such a test would be a useful aid in determining treatment strategies for cervical cancer patients.

“If you use it on every woman who has a Pap smear, it could turn out to be inordinately expensive, and there are many with HPV infection who do not go on to have cervical cancer,” said Dr. Eyre. “It is much more feasible to use it on the 12,800 women who are diagnosed every year with cervical cancer.”

Decoy molecule may help defeat toxins
Scientists at the Los Alamos National Laboratory in New Mexico report that they have designed decoy molecules that, in laboratory studies, can stop the spread of Staphylococcal superantigen, a toxin responsible for about 25 percent of the food poisoning cases in the United States. The same method might be used to fight similar toxins, including those associated with anthrax, HIV and toxic shock syndrome, according to the researchers.

The research is reported in the current (April 10) issue of Biochemistry, a peer-reviewed journal of the American Chemical Society, the world’s largest scientific society.

The decoy molecules are better suited to protect the body’s immune system from attack than currently used antibiotic approaches, according to Goutam Gupta, PhD, who led the research project. Ideally, the decoys could offer a faster-acting, more effective alternative to stop the toxins, he said. He believes it could be given to patients suffering from food poisoning or toxic shock syndrome, or given prior to possible exposure to biowarfare agents like anthrax. 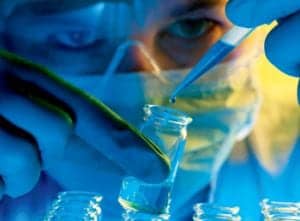 One Control Does Not Fit All