Polycystic Ovarian Syndrome, known as PCOS, is a silent and often mysterious disease that plays havoc with a woman’s body and increases the risk of serious illness.

PCOS is the number one cause of female infertility and increases the risk of heart disease, insulin resistance, diabetes and certain cancers. It is also the most common metabolic abnormality in women of child bearing age, affecting 5 to 10 million women nationwide, according to the American Association of Clinical Endocrinologists. Yet, it is plagued by a lack of awareness and is one of the most difficult diseases to diagnose.

There is no single test for diagnosing the illness, but a detailed cholesterol profile called the VAP Cholesterol Test—developed by Atherotech Diagnostics Lab—along with diet, exercise and the right medication, is changing how doctors approach PCOS.

"The average patient sees five medical practitioners before getting diagnosed," said Steven Foley, MD, a Colorado Springs, Colo, gynecologist who specializes in the identification and treatment of patients suffering from PCOS. "That’s because the symptoms can vary from woman to woman. Early diagnosis is critical not only in reducing the risk of more serious complications, but because PCOS can be devastating for women physically and emotionally."

Women often spend a tremendous about of time and money searching for answers to these unexplained symptoms and for a doctor who understands the complexities of PCOS. Foley recently used the VAP Test to help diagnose PCOS in a 24-year-old patient who was struggling with weight gain, insulin resistance and high cholesterol levels. The Colorado Springs woman faced the prospect of early heart disease, diabetes and infertility unless her health improved. Foley prescribed a healthy diet, regular exercise and a diabetes medicine that helps to control her insulin and blood sugar levels. He continues to use the VAP Test to manage the woman’s PCOS and heart disease risk.

"It is the most accurate and easiest method to evaluate my female patients for elevated cholesterol as well as polycystic ovarian syndrome," Foley said. "It is particularly valuable when developing a treatment plan for women and also helps to monitor response to treatment."

September is PCOS Awareness Month and serves as a reminder for women to have a conversation with their health care provider about PCOS. The four major symptoms of PCOS are irregular periods, weight gain, high testosterone levels and metabolic disorders, including cholesterol problems.

The VAP Test plays a central role in the diagnosis of PCOS because, unlike the standard cholesterol test, it measures a range of cholesterol subclasses and can be administered without fasting. The VAP Test is widely covered by insurance, and results have shown a correlation between patients who have PCOS and low levels of HDL2, a highly protective subclass of high density lipoprotein (HDL).

Atherotech Diagnostics Lab has seen steadily increasing demand from gynecologists and endocrinologists for the VAP Cholesterol Test. The VAP Test is available nationwide and reports 22 separate components of blood compared to just four in the standard cholesterol test (LDL, HDL, total cholesterol and triglycerides) at no additional cost. 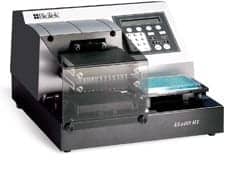