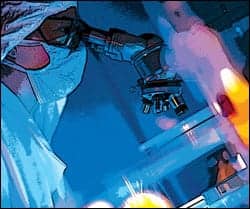 The magic of the human body is that it operates, in many ways, on auto-pilot. It is not necessary to think about breathing or blinking—or healing internal injuries to veins and arteries. Sometimes autonomic processes do not work as expected and, in the latter example, the result can often be venous thromboembolic disease (VTED), which manifests itself in two different ways: pulmonary embolism (PE) and deep vein thrombus (DVT).

DVT is most commonly the development of a blood clot in the deep veins of the pelvis, legs and thighs. Deep veins in the pelvis or arms can also develop clots, though it is not seen as frequently. Once developed, the clots can break free and travel throughout the body, many times coming to rest in the pulmonary arteries of the lungs as PEs.

According to the FDA,1 nine out of 10 cases of pulmonary embolism are caused by blood clots that form in the legs. DVTs are more pervasive—occurring in about 2 million Americans every year—but are not considered as life-threatening as PEs.

In fact, each year an estimated 600,000 people in the United States will experience a PE. More than 10% will not survive, with the majority dying 30 to 60 minutes after the onset of symptoms.1

“A very high percentage of VTEs go undiagnosed or are misdiagnosed,” says Jerald A Solot, DO, FACEP, FACOEP, emergency medicine physician at the University of Pittsburgh Medical Center (UPMC) Shadyside. “There are a large number of these that come in, but it’s just the tip of the iceberg.”

A series of events must occur for a clot to be formed in the body, all designed to limit blood loss. In the first step of what is known as the “coagulation cascade” a protein called fibrin is produced. Together with another protein—thrombin—a “net” is created in the pathway, gathering platelets so the blockage is formed.

Once healing has occurred, the body generates another protein known as plasmin that breaks apart the clot. One byproduct of this disintegration is a D-dimer. Because the level of D-dimer is almost always elevated in VTED patients, identifying the levels of D-dimer allows physicians to exclude it as a diagnosis.

This makes it a valuable test for the emergency department (ED) staff, whose primary objective isn’t making an instant diagnosis but rather excluding possible diseases and conditions.

“Emergency department doctors are trying to rule out situations so they can determine the appropriate place for this patient once they get out of the ED,” says Vince Tumminello, senior marketing manager, bioMérieux. Referred to as a test’s negative predictive value, being able to confidently identify what the condition is not is a vital component of critical care.

Ordering a D-dimer for suspected DVT or PE isn’t a foregone conclusion. The initial step is a physical assessment, employing the “Wells Clinical Prediction Rule for Pulmonary Embolism and Deep Venous Thrombosis.”

As part of this evaluation created by Philip S Wells, MD, MSc, different point values are assigned to specific symptoms and facts of patient history. For example, if a DVT was suspected in a patient, consideration and points are given for current or previous cancers, immobilization of lower extremity, or localized tenderness along distribution of deep veins. Suspected PE examines other presentations, such as hemoptysis, a heart rate greater than 100 beats per minute, or clinical symptoms of DVT. The total score achieved falls into one of three categories: low, moderate, or high predictability. The patient’s resulting score will determine which test comes next.

“If you have a patient with an extremely high Wells score, a D-dimer should not be ordered. In my opinion, the patient should go directly to an imaging test,” says Norman A Paradis, MD, vice president of clinical and medical affairs, Biosite, which manufactures a D-dimer test. Once in radiology, the most common modalities used in identifying DVTs and PEs are Doppler (Duplex) ultrasound, MRI, and CT imaging. Patients in the other categories are more likely to benefit from a D-dimer test. “If you have an intermediate or low-probability patient and a negative D-dimer, then you know that patient may not need a CT scan,” Paradis says.

In addition to its D-dimer test, Biosite manufactures a shortness-of-breath (SOB) panel designed to aid in the evaluation of patients who present to the ED with shortness of breath, a common symptom of PE. The panel simultaneously measures the levels of five biomarkers: B-type natriuretic peptide (BNP), D-dimer, myoglobin, CK-MB, and cardiac troponin I. Both Biosite products are point-of-care diagnostic tests that produce results in approximately 15 minutes.

Another D-dimer test on the market, manufactured by bioMérieux, is approved by the FDA to exclude the presence of DVT and PE and is EC-certified for the exclusion of PE.

“We went to the FDA with compelling evidence that showed, along with clinical assessment, using our D-dimer test with a very particular cutoff makes it possible for clinicians to exclude the condition of DVT or PE without having to do radiology testing,” Tumminello says. “If a patient is either low or medium probability and our D-dimer is below 500, the patient is not going to have the condition.”

Having such guidelines in place is a substantial benefit to ED physicians.

“The importance of this is, you score the patient for VTE based on these criteria and you come up with a number,” says Solot, who emphasizes that all D-dimer tests are not created equal. “They are not mix-and-match, but if it is a high-sensitivity D-dimer test and it is negative, the predictability that you don’t have a VTE phenomenon is somewhere in the vicinity of 98 to 100%.”

Such accuracy not only increases the level of patient care but improves throughput in both the emergency and imaging departments. Beyond scheduling, it is also financially beneficial.

“Why wouldn’t I use a test that costs $25 or $50 versus a CT scan that costs $1,500?” Solot says. “More importantly to me, at 2 am on a Saturday, there is no [radiology] tech to do the exam, so it makes it even more important to have a test I can use when I need it. The idea is to use the best test. If I can do a test that’s $25 and rule out 20 to 40 percent of the patients who come in to my department without having to do a CT scan, then that’s what I want.”

With almost 100% negative predictability, the D-Dimer is not going away anytime soon. But as scientists work to discover additional biomarkers, it is likely that a comprehensive panel will be available to clinicians looking to identify DVTs and PEs.

“While we have not identified additional markers that would enhance D-dimer, we believe that most diseases will eventually be approached with more than a single marker,” Paradis says. “On the diagnosis side, getting that information into the clinician’s hands immediately will be the next step. Eventually, we are going to see the core tests each unit needs at the point-of-care or near-patient.”

As an emergency medical physician, Solot eagerly awaits the time when such on-site testing is possible.

“We don’t do point-of-care testing for two reasons: because of the regulations involved, and the tests are not as sensitive or as specific as we would like them to be. What you want is something that is not only specific, but is also sensitive,” he says, adding that ideally such a test would go beyond just negative predictability. “It’s more important that a test be correct than that it be quick. You need a test that will be both positive and be highly accurate, and can both rule in and rule out simultaneously.”

Regardless of what comes next, one thing is certain: The ED physicians and clinical labs must establish and maintain a positive relationship to ensure that the proper tests are ordered and that results are read accurately.

“ED physicians will tell you they’ve got to have confidence in the test and understand what test is being used in the laboratory,” Tumminello says. “They need to understand the performance of those assays, what are the pluses and minuses of them, so they can understand what the numbers mean in context of a patient condition.”

Solot concurs. “As an ER doc, I think it’s important that we have a very good relationship with our lab. I think this is just one of many issues where the lab and the emergency department can work together.” Solot, who orchestrated monthly meetings between the two departments when he served as ED chairman, continues, “I think the important thing to recognize is the bottom line: Anything we do is to optimize the diagnosis and treatment of patients who come through the hospital. And the lab has to work with us to do that.”

The Science of Credentialing Scientists