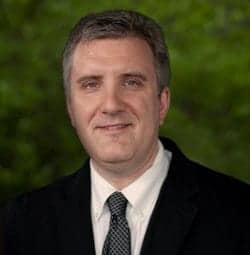 Insight Genetics, Nashville, Tenn, has just inked an agreement with QIAGEN, Hilden, Germany, with US headquarters in Germantown, Md, whereby the companies will develop a cancer diagnostic test related to the anaplastic lymphoma kinase (ALK) biomarker, to be validated and sold by QIAGEN as a companion diagnostic. ALK mutations are a driver in non-small cell lung cancer (NSCLC) and several other cancers, and QIAGEN has licensed from Insight diagnostic rights for the ALK gene, a key target for a novel class of lung cancer drugs. CLP sat down with David Hout, PhD, vice president, Research and Development, Insight Genetics, to learn more about this technology and where the molecular diagnostics company is heading with its work in personalized cancer care.

CLP: How is this agreement in line with where oncology diagnostics are headed?

Hout:: Perhaps no clinical area has been more altered by molecular diagnostics than oncology. The greatest need for cancer patients today is in increasing the efficacy of treatments. Diagnostic tests are key to addressing this need, providing information that allow physicians to pinpoint which patients are most likely to benefit from a drug and sparing other patients from needless side effects and expense.

For years cancer care has been headed toward more targeted treatments, and this move requires significant advancements in companion diagnostics—molecular tests that are fast, accurate, and comprehensive enough to make targeted therapies possible. There are several cancer drugs on the market that have been approved with a companion diagnostic including Gleevec, Iressa, Camptosar, Tarceva, Erbitux, Herceptin, and most recently, Zelboraf and Xalkori. But, we have a lot of work yet to do in this space to add to and enhance our base of companion diagnostics.

Insight Genetics’ partnership with QIAGEN will yield an FDA-cleared test that will enable more sensitive detection and increased selection of ALK mutations and fusions, which have been implicated in several cancers. We see our test becoming a new standard for ALK testing for ALK inhibitors such as Xalkori, and also enabling clinical trials for next-generation ALK inhibitors, of which there are more than 10 already in development.

CLP: What key trends are emerging in personalized medicine as it relates to cancer?

Hout:: In addition to the increasing importance of companion diagnostics, we see resistance mutations being a key area of focus. In some cases, mutations conferring resistance to certain cancer treatments may exist de novo for a patient and should be identified at an initial cancer diagnosis. These mutations let a physician know the likelihood of a therapy working for that patient. If resistance mutations exist, certain courses of treatment will not be as effective for that person.

In other cases, patients can develop resistance to their cancer therapies over time. In these cases, a patient’s relief may last for about a year, but as resistance mutations develop, the tumor starts growing again, rendering the therapy ineffective.

In either of these scenarios, accurate detection of resistance mutations is critical in helping physicians make fast, accurate treatment selection decisions and monitor cancer patients on an ongoing basis to ensure that a chosen therapy remains effective.

The ALK small molecule inhibitor, Xalkori, has demonstrated response rates in NSCLC patients upward to 60% in clinical trials all the while leaving around 25% to 30% of patients with little to no response to Xalkori. The lack of a clinical response to Xalkori indicates the presence of de novo resistance mutations in this population subset at the time of diagnosis. In addition and unfortunate, as little as 1 year after initial treatment with Xalkori almost 100% of patients develop some level of resistance. This trend is not exclusive to Xalkori but observed across many targeted gene therapies and is likely to plague cancer treatment long into the future. Personalized cancer regimens therefore must monitor patients for resistance beginning at the point of diagnosis and throughout treatment, determining the right time for introduction of second-generation inhibitors.

Hout:: The level of difficulty in adopting a test into a clinical lab and present inconsistency in test results will continue to drive a trend toward more elegant and quantitative testing methods such as qPCR. ALK is a great microcosm for this trend. Methods of ALK detection such as variant-specific PCR, immunohistochemistry (IHC), and fluorescence in situ hybridization (FISH) analysis have well-documented challenges. Issues such as intensive workflow and low sensitivity make these tests difficult to adopt and can create interlaboratory disharmony.

We are going to see continued development in companion diagnostics to create tests that are more accurate, easier to adopt and perform and, hopefully, more cost-effective. This is actually an important aspect of our partnership with QIAGEN. In our initial development work on our PCR-based ALK assay we conducted comparison testing, which showed that our approach had many benefits over other ALK testing methods. For example, our assay was able to determine the true mutational status in some samples that were either “undetermined” or ALK “negative” by FISH.

CLP: What role will next-generation sequencing have in molecular diagnostics?

Hout:: Next-generation technologies have proven their importance in identifying rare mutations driving numerous malignancies. The overall cost of whole genome and targeted sequencing have continued to decline, while an ever-expanding number of core facilities have been established to provide both researchers and physicians next-generation services. Although the fee for next-generation services has been declining, the technical hurdles and cost of incorporating an actual next-generation sequencer in-house, as well as skill and capacity concerns in processing the wealth of data obtained from each run, have prevented most CLIA laboratories from adopting these types of diagnostic platforms. Nevertheless, there is still a strong push for the use of next-generation testing for the detection of somatic alterations in relevant cancer-related genes from both academic and industrial entities.

Numerous companies are offering massively paralleled sequencing to identify relevant alterations in a single test with little starting material and effectively tailoring clinical treatment to each patient. Complications using next-generation sequencing as a routine diagnostic arise when mandates from the FDA require therapeutic companies to contemporaneously develop an IVD companion diagnostic to accurately identify patients most likely to benefit from each targeted therapeutic agent. In other words, only FDA-cleared diagnostics can be used to determine if a patient is a candidate for targeted gene therapy. The use of large numbers of capture probes by targeted sequencing, along with the overall technical difficulty, cost, and complexity of data interpretation with whole genome sequencing, makes full FDA clearance of such next-generation diagnostics improbable.

Ultimately, only assays capable of obtaining full FDA clearance while maintaining high levels of sensitivity and specificity along with ease of use will be attractive as frontline diagnostics now and into the immediate future. In the near term we see platforms such as next-generation being utilized more for patient therapeutic resistance monitoring and research uses only.

CLP: Is there anything you would like to add?

Hout:: It is a very exciting time to be in molecular diagnostics and cancer care. We’ve reached a critical point of need and opportunity in both of these fields in which our science and technology have caught up to one another in a way that’s very meaningful for patient care. Scientific discovery is providing us more and more clarity on important biomarkers, and diagnostics developers are working to create the assays that detect these biomarkers. We can drill deeper today into what makes each person’s cancer unique and designate treatments that will be most effective for them. And with effective testing on both the front and back end of treatments, we can start to anticipate the mutations that might arise and hopefully, design drugs that will combat the cancer anew. Our company fits into this nexus, where molecular diagnostics and cancer treatment come together.

David Hout, PhD, has extensive experience in the fields of molecular biology and molecular diagnostics. Prior to joining Insight Genetics, he served as senior research microbiologist at Biomune in Lenexa, Kan. Hout holds a PhD in molecular virology from the University of Kansas Medical Center. He completed postdoctoral work in biochemistry and virology at Vanderbilt University.

Judy O’Rourke is editor of CLP.

A Ceaseless Hunger: The Prader-Willi Syndrome

I am searching for linearity material for free T3 and Free T4 on my Centaurs.
Do you know of a source?