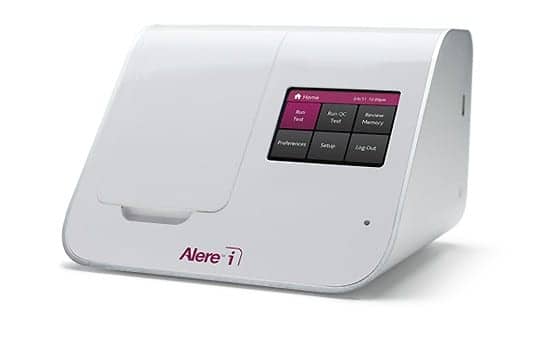 Alere Inc, Waltham, Mass, has announced that the Alere i RSV test has received waived status under the terms of the Clinical Laboratory Improvement Amendments of 1988 for the detection of respiratory syncytial virus (RSV) infection in children and adults. The Alere i RSV test was cleared for marketing by FDA in August 2016, and can be used at the point of care to detect RSV in 13 minutes or less.

The test will be available in physician offices, hospital emergency rooms, and walk-in clinics throughout the United States.

“Our innovative Alere i platform now offers the key trio of respiratory assays for rapid molecular detection of RSV, influenza A and B, and Strep A in a broad range of healthcare settings,” says Avi Pelossof, global president of infectious disease at Alere. “Healthcare providers can now deploy the power of rapid molecular testing to quickly and accurately differentiate these potentially serious infections and link patients to the appropriate treatment.”

The test was developed to facilitate early and appropriate supportive care, the avoidance of unnecessary antibiotic treatment, and the rapid initiation of infection control measures to help control the spread of RSV, a highly contagious and potentially life-threatening infection.

“As of February 28, 2017, we have installed approximately 7,500 Alere i instruments across the globe,” says Pelossof. “Achieving a third CLIA-waived assay on the platform demonstrates our ability to successfully bring transformational new technology to market, and we look forward to further expanding the assay content and disease states of the Alere i platform.”

FDA initially cleared the Alere i molecular platform for the detection and differentiation of influenza A and B virus in June 2014. The Alere i Strep A test received FDA clearance in March 2015.