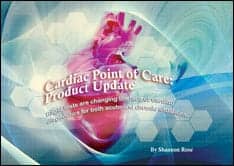 Heart disease is the number one cause of death worldwide, responsible for approximately 1 million hospital admissions annually and $60 billion in costs, according to Harvard Medical School. Time translates to muscle damage in a heart emergency, and recent high-quality, rapid point-of-care products are providing physicians with useful tools in diagnosing a notoriously difficult disease to pinpoint.

Chronic heart failure (CHF), a disturbance of the heart’s capacity to act as a pump, is a serious condition that is often hard to diagnose because patients may not have symptoms early on in the disease, and, in the later stages, the symptoms often resemble those of a variety of other conditions. Most commonly due to ischemic myocardial disease caused by coronary artery disease, CHF can also be caused by disorders of myocardial tissue or valvular disease. A patient history and physical exam often mimic other diseases, and conventional diagnostic methods, such as chest x-rays, pulmonary function, and eclectrocardiograms, are usually not available at the point of treatment.

Rapid point-of-care tests for use in physician’s offices, clinics, and emergency departments are critical to improve the turnaround time for reporting results to clinicians so they can make timely diagnoses and prescribe appropriate treatment. Most of the tests in the survey provided results in 15 minutes and were available on readout screens, LCD displays, and printouts. One company, Roche Diagnostics, Indianapolis, provides strips that the user interprets as positive or negative.

The latest in near-the-patient diagnostics are assays for B-natriutetic peptide (BNP) and NT-proBNP—two separate fragments of the parent proBNP molecule, a single-chain precursor peptide. Both hormones are released in response to the mechanical stress of heart failure and can be used to rule out CHF. They are the only biomarkers for CHF.

BNP is secreted by ventricular myocardium in response to stretching of the heart; has vasodilative, diuretic, and natriuretic activity; and is a sensitive marker of left ventricular end-diastolic pressure. ProBNP is the precursor of BNP, which is enzymatically cleaved into an inactive amino terminal fragment—NT-proBNP. As the CLP survey shows, a wide array of products now allows rapid measurement of both at the bedside.

While studies have shown that both markers are clinically comparable blood tests to rule out CHF, BNP was first put on an analyzer in 2001. BNP levels of greater than 100 pg/mL identify patients with heart failure with more than 95% specificity and more than 98% sensitivity.

Because BNP is biologically active, it has a shorter half-life than the NT-proBNP molecule—approximately 20 minutes—and thus fluctuates on a faster time scale. By contrast, NT-proBNP has a half-life of roughly 120 minutes, remains more stable in blood samples, and is less influenced by acute haemodynamic variations. This means that NT-proBNP levels reflect the mean values of left ventricular filling pressures over the previous 12 hours. The longer half-life, say survey respondents including Nanogen Inc, San Diego, Quantimetrix Corp, Redondo Beach, Calif, and Siemens Medical Solutions Diagnostics, Tarrytown, NY, makes NT-proBNP the superior marker and an improved standard. NT-proBNP is stable in EDTA plasma for 3 days at room temperature.

On the other hand, companies that test for BNP, such as Inverness Medical Professional Diagnostics, Princeton, NJ, and Abbott Diagnostics, Abbott Park, Ill, cite the fact the BNP is the biologically active hormone and claim that more acute changes in the status of the heart can be determined because of BNP’s shorter half-life. Studies have found positive predicative values of more than 79% and negative predictive values of 89%. BNP levels also correspond closely to left ventricular pressures, severity of illness, and clinical outcomes—information that is valuable for patients with known heart failure as well as an acute coronary syndrome, which sometimes involve compromise of ventricular function. The BNP assay has been shown to reduce treatment delays and shorten hospital stays.

Whole blood or plasma troponin—either troponin I or troponin T—tests are still ordered to diagnose damage to the heart from a heart attack. Most companies that responded to the survey, such as Roche, offered assays for troponin, as well as other cardiac biomarkers such as myoglobin and creatine-kinase-MB (CK-MB). Since troponins are specific to the heart muscle, the assays can detect heart muscle injury with greater sensitivity and specificity, making them the preferred tests for a suspected heart attack. They also remain elevated for a longer period of time.

Troponin levels can detect and evaluate mild to severe heart injury, as well as diagnose a heart attack. In addition, the test can distinguish chest pain that may be due to other causes. Even if a patient does not see the physician for a day or more after experiencing heart-related chest pain, discomfort, or other symptoms, the troponin test will still be positive if the symptoms are due to heart damage. Typically, two or three tests are done over a 12- to 16-hour period.

The increased early sensitivity likely reflects the fact that the percentage of troponin released that reaches the blood after cardiac injury is greater for troponin than for CK-MB. Elevated troponin levels then persist in the blood owing to the slow release and degradation of the structural pool, since the half-life of troponin and its complex is about 2 hours. The prolonged window during which troponin levels are elevated allows for increased clinical detection of cardiac events and thus, functionally, greater clinical sensitivity.

According to the American College of Cardiology and the American Heart Association (AHA), a cardiac-specific troponin (such as troponin I) is the preferred marker for diagnosing cardiac injury. However, troponin does have some disadvantages as well, including low sensitivity in the early phase of myocardial infarction (less than 6 hours after symptoms onset) and its limited ability to detect late minor reinfarction.

Prognostics: CK-MB, myoglobin, prothrombin, and cholesterol. While these markers have been used mainly to aid in the diagnosis of chest-pain patients with nondiagnostic electrocardiograms, they are also used as prognostic indicators of a heart attack. According to the AHA, several studies have identified a measurable relationship between cardiac troponin levels and long-term outcome after an episode of chest discomfort. They suggest that these tests may be particularly useful to evaluate levels of risk. In other words, it’s possible that the results of a troponin test could be used to identify people at either low risk or high risk for later, serious heart problems.

CK-MB, which resides in the cytosol and facilitates high-energy phosphates into and out of mitochondria, is most widely used in hospitals to detect myocardial damage due to its relative cardiospecificity. Clinicians value it because it has been available for some time, but it is not an ideal marker to use alone because its levels do not rise early enough to make a rapid diagnosis. In addition, it may be elevated in other conditions. CK-MB levels typically exceed the upper limit of normal within 3 to 8 hours of the onset of acute myocardial infarction, peaking within 10 to 24 hours, and returning to normal within 2 to 3 days. Additionally, CK-MB elevations occur as a result of chronic muscle disease, such as muscular dystrophy; or crush injury, exercise, and renal failure.

Myoglobin is a protein that is found in both skeletal and myocardial muscle tissue, including the myocardium, skeletal muscle, and smooth muscle. Following injury to any of these muscles, it appears in the blood more rapidly than any other marker, including troponin, giving it an advantage as a marker. As early as 1 hour following the onset of chest pain, when CK-MB levels are still in the range of normal, myoglobin levels may already be elevated. However, since myoglobin is not specific to the heart muscle, the elevation may be due to a skeletal injury as well as to a heart injury. Therefore, a negative myoglobin result effectively rules out a heart attack, but a positive result must be confirmed by testing for troponin. This rapid appearance is due to myoglobin’s location in the cell and its low molecular weight.

While it exhibits high clinical sensitivity for acute myocardial infarction, it has poor specificity. Every patient with acute myocardial infarction will have elevated myoglobin in the early hours following the onset of chest pain. Blood samples are drawn upon admission and every 2 to 3 hours for up to 12 hours in patients who come to the emergency department with a possible heart attack.

Many of the survey respondents’ assays also tested for D-dimer, along with other laboratory tests, to help rule out diseases and conditions that cause hypercoagulability, a tendency to clot inappropriately, such as thrombosis.

Also mentioned was Prothombin time/International Normalized Ratio, used to monitor the effectiveness of blood-thinning drugs, such as warfarin. These anticoagulant drugs are prescribed on a long-term basis to patients who have experienced recurrent inappropriate blood clotting, which can occur in people who had heart attacks. Using one drop of finger-stick fresh whole blood, the test is used in a physician’s office or outpatient clinic, and results are available in less than 1 minute from an LCD readout screen.

Testing for cholesterol levels was also mentioned, but that is different from most tests in that it is not used to diagnose or monitor heart disease, but is used to estimate risk of developing heart disease. Because high blood cholesterol has been associated with hardening of the arteries, heart disease, and a raised risk of death from heart attacks, cholesterol testing is considered a routine part of preventive health care. Results are available in 5 minutes from an LCD readout.

Cholesterol testing is recommended as a screening test to be done on all adults at least once every 5 years and is usually ordered in combination with other tests including triglycerides and HDL-C, markers also mentioned in conjunction with cholesterol as a marker.

Cholesterol is tested at more frequent intervals in patients who have been prescribed a diet and/or drugs to lower their cholesterol. The test is used to track how well these measures are succeeding in lowering cholesterol to desired levels and in turn lowering the risk of developing heart disease.