A shrinking pool of lab technologists, the growing demand for testing for aging baby boomers, new testing requirements, and the drive to reduce costs are combining to push hospital and clinical laboratory operations to incorporate more automation. However, enthusiasm for total laboratory automation (TLA), which first surfaced a decade ago, has dampened dramatically. Reports suggest that fewer than 25 hospitals in the United States have taken the TLA path.

More often than not, today’s labs have preferred to adopt incrementally. They’re adding hardware and software, opening up the design of their labs, and consolidating workstations as test demand rises and their budgets allow. The vast untapped market for automation presents new opportunities for companies of all sizes and technologies. This industry overview profiles several of these companies.

Last year proved challenging for the company. Fiscal year sales through August 2003 dipped about 5.7% from the previous year, finishing at $7.3 million. Delays in the release of CCA’s CyberLAB® 7.0 LIS (laboratory information system) cost it some sales while the new version was tweaked to comply with HIPAA-related upgrades. Installations of the 7.0 software began late last year.

Michelle E. Del Guercio, CCA director of marketing and product management, says initial CCA products featured “black-box” interfaces for capturing data from automated instruments and transmitting them to a host in an LIS or other computer system.

In 1983, CCA introduced its flagship CyberLAB platform; a pharmacy version arrived in 1995. CCA completed its suite of ancillary products with CyberRAD (RIS) in 1998. The CyberPATH, an anatomic pathology module, and WebGateway (for lab and radiology Internet result inquiry and order processing) followed. In 2003 CCA introduced CyberLAB 7.0, the browser-based version of its proven LIS. “To date, CCA is the only vendor offering a complete browser-based LIS,” Del Guercio says.

Labs are using LIS’ to assure patient confidentiality and safety while meeting HIPAA and other regulations. Most platforms internally track all actions made to each sample as a means of holding each user accountable for the actions and recordings on the patient’s medical record.

Automated systems address patient-security issues by requiring a user ID and password. “This prevents users from accessing areas of the system, such as patient records, that they should not have access to in order to perform their work,” Del Guercio says. “The accountability and security tracking can only be accomplished by use of an automated system.”

With increasing demand for more intensive data gathering and comparison (such as genomics and other advanced studies), technology is dictating reliance on automated systems, Del Guercio says. Advanced systems offer decision support tools and databases capable of producing the reports desired of such health care technological advancements and management.

For labs considering an investment in automation, Del Guercio urges a careful and comprehensive review of technologies offered by different vendors. She says critical criteria to consider include ease of use, robust functionality, and scalability—all strong selling points for her own products. “Our CyberLAB 7.0 employs thin-client technology that offers lower total cost of ownership due to minimal desktop requirements and network administration,” Del Guercio says.

Care Fusion
Founded 3 years ago, Care Fusion (McLean, Va) saw demand for its products grow dramatically during the past fiscal year, according to Chief Executive Officer Kenneth E. Tighe. During the year, Care Fusion sold at least one of its suites of wireless bar-code–enabled patient safety products to 17 new hospital customers.

Care Fusion was started on the premise that stationary computers placed in a highly mobile environment are not up to the task on two important challenges: the ability to deliver improved patient safety, while maximizing a nurse’s time.

Tighe says National Patient Safety Center statistics indicate that about 40% of laboratory errors occur at the point of collection, and it is often something as simple as patient misidentification. The numbers were enough to get Care Fusion working on development of its point-of-care bar-code–enabled patient ID system. Bar-code technology is now spreading to support the clinical workflow of nurses, laboratory, and blood-bank personnel.

Among the company’s early customers was the largest health care system in the world, the Veterans Administration. “We began with a development project to extend laptop systems, which have many limitations, to a handheld computer,” Tighe says. “That experience and the extensive feedback we receive from the users in the VA has proven invaluable; the lessons learned there have been incorporated in all of our commercial products.”

The company’s flagship wCareCollect™ uses a handheld computer with an integrated bar-code scanner and a portable bar-code label printer. Tighe says the system accomplishes three important tasks at the point of collection: it highlights a laboratory order; scans the patient bar-code identifier; and generates a unique specimen bar code.

This confirmation process ensures collected specimens are labeled correctly. The result: specimen and blood mislabeling errors are as much as 99.99% eliminated in a way that does not increase the time it takes for clinicians to perform these tasks, according to Tighe.

Tighe says technology must blend seamlessly into the daily workflow of nurses and not require more of their limited time. “Care Fusion’s applications were designed by nurses,” Tighe says. “All of our product managers and field project mangers have clinical backgrounds.”

In addition, the technology has to be fast and easy to learn and use. “Our applications are real-time wireless—no data syncing like PalmPilots,” Tighe says. “We incorporate technologies into our software, such as single sign on and application layer security with subsecond response times.”

Tighe says “wCareCollect requires very little infrastructure, is highly mobile, and dramatically reduces the risk of liability due to human error.” Compared to other technologies, such as CPOE, bar-code systems are much less expensive and much easier to implement.”

Many factors are driving bar-code technology, Tighe says, including attention from regulators, legislators, and hospital administrators who see the dollars and cents reality of the situation. Also, the Joint Commission on Accreditation of Healthcare Organizations is requiring hospitals to develop a plan to implement bar-code technology by 2007.

SCC recently completed development of all its major software modules for ancillary departments in a hospital. That positions SCC to serve larger markets and integrated delivery network sites requiring complete clinical modules in addition to SoftLab, SoftMic®, and SoftPath®. With SoftRx®, SoftRad®, SoftBank® II—and now the release of SoftDonor®, SoftWeb™, and SoftWorkflow™—SCC can serve as a single source for clients.

In the past year, several SCC competitors were absorbed by large public corporations whose primary interest is not health care, Hakim says. As a private company not affected by corporate buyouts, SCC has been able to focus on giving clients the best possible service.

“Instead of worrying about investors, we have been able to reinvest profits into R&D,” Hakim says. That R&D reinvestment has been running about 20% per year. The company has been quick to adopt CORBA (common object request broker architecture) and other beneficial technologies.

SCC software engineers are busy working on a diagnostic genetics laboratory module to be called SoftGene™. The product’s alpha testing phase has ramped up, with a cytogenetics (Culture/FISH) component well in place, and the molecular genetic (DNA fragments) component is coming soon. SoftGene is projected to go live in fall 2004.

“Laboratories are going to automation and robotics not because it saves money but because they can’t find the people; technologist shortages are having a very real impact on the ability of laboratories to process tests accurately and quickly,” Hakim says. “It’s a return-on-investment issue.”

Atlas communication and connectivity software routes orders to and from Cerner and Misys systems. Atlas software also captures clean orders—orders that meet all the validation criteria desired by the lab—at the point of order entry. This increases a laboratory’s success in acquiring more outreach business.

“Our role at Atlas is to ensure that the orders received by those devices (robots and automated test devices) arrive in a timely manner and are “clean” when they get there. Clean lab orders facilitate the physician’s workflow and provide improved care for patients,” Park says.

The company’s LabWorks product processes electronic ordering and delivers clinical results to lab outreach customers. It automates clinical information systems among different labs for the capturing and routing of HL-7 (Health Level 7) orders and more. (HL-7 is a certified messaging standard being adopted by countries around the world.) Other products include Total Outreach Management and LabEMR, used to improve lab-to-EMR communications, and Atlas Interface Engine, a real-time format converter that eases rapid HL-7 and XML-based format conversions for improved connectivity.

Laboratory outreach will continue to be a primary focus at Atlas. “We see the outreach market as an extremely promising area as health care organizations strive to remain financially viable in a world of decreasing reimbursements,” Park says.

Community Hospital Perspective
Denise Uettwiller-Geiger, PhD, DLM (ASCP), is administrative director and clinical chemist at John T. Mather Memorial Hospital, a 248-bed community hospital in Long Island, NY. Her lab is among the most advanced of any hospital in the country. One of the associated benefits of automating the Mather Memorial lab has been the impact on its staff of medical technologists, Geiger says.

“Automation has helped create a more professional environment and improved the work life of the medical technologists within our lab. Technology enables clinical labs to reduce their dependency on the ever-shrinking pool of highly trained medical technologists, she says.

Geiger says part of the responsibilities of managers is to attract, hold and motivate staff. “Automation helps us reach those objectives,” she says. “It’s been very good for the retention and recruitment of our technologists. In addition to improving staff management, automation helps reduce the possibility of test errors. It’s the way to go, especially if you have a small pool of medical technologists,” Geiger says.

Investments in automation can pay off even if you’re not a 1,000-bed institution. “From my perspective, you start small, think about today and work toward tomorrow,” she says.

Among opportunities for small labs: new analyzers that combine clinical chemistry and immunoassays in one technology box. Another option: stand-alone preanalytical modules. Not every facility requires a comprehensive automated track. “Just concentrating on connectivity—consolidating workstations—can improve a lab operation,” she says. Then a lab can add more modular features as needs arise and budgets permit. Mather Memorial now maintains more than 3,000 test tubes in its refrigerated stockyard. 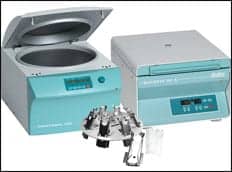