POLs Under the Gun 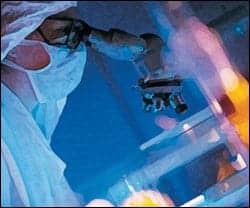 While the number of physician’s office labs (POLs) in the United States continues to increase, POLs of all sizes and test volumes are facing growing challenges to their profitability from a continuing flat-fee structure and a tougher stance on oversight from state and national review agencies.

The inspiration behind Quality America Inc—Sheila Dunn, PhD—directs the Asheville, NC-based firm’s efforts to help POLs with CLIA and OSHA compliance issues. Dunn says that while the number of physician’s offices performing lab testing continues to increase—now at more than 106,500 in the United States—the overwhelming majority are involved only in CLIA-waived routine testing.

Factors influencing the decline of nonwaived POLs, Dunn says, include stricter regulations, manufacturers’ unwillingness to develop more analyzers and equipment for the POL segment, and declining resources allocated for support and training by manufacturers.

Oversight is at the heart of a government accountability office (GAO) report that outlines 13 recommendations to the Centers for Medicare and Medicaid Services (CMS), many of which are concerned with how the CMS and its authorized agents should review non-CLIA-waived labs.

The CMS is being urged to adopt standardized categories and survey findings that will permit fair comparisons among results from different surveyors and states. Other recommendations involve the granting of advanced notice of lab reviews and the manner for handling condition-level deficiencies.

Lab-worker qualifications and experience continue to be an issue. For years, Dunn says, a staff member with a high school or GED diploma working under the supervision of a physician with at least 1 year of experience was sufficient for nonwaived test labs. Now, inspectors are strictly enforcing the CLIA personnel requirements for technical consultants in moderately complex POLs.

CLIA inspectors are also asking POLs to perform statistics that were not required before the final CLIA regulation was released a couple of years ago, Dunn says. Typical POLs, she says, do not have medical technologists on staff skilled at running sophisticated instrumentation and with knowledge to calculate means and standard deviations. This new clampdown by CLIA inspectors is sending POLs scrambling to find affordable outside expertise in the form of consultants. In response, some POLs are faced with bringing on board technical consultants who are committed to testing—a full-time position they cannot afford.

“CMS has traditionally taken an outcomes-based approach in which POLs who reported good results were allowed to operate with minimal interference,” Dunn says. “Two significant changes: First, CLIA is now mandating a method of validation for every new nonwaived test—something too complicated for most POLs. Second, newly adopted quality-management-system requirements demand much more proactive and even retroactive work that most labs have not been doing in the past.”

Equipment manufacturers are not doing enough to support method validation at installations. While CLIA mandates that POLs perform the validations, few manufacturers do any more support than leave behind a training manual. “There are too many manufacturers who are doing a schlocky job,” Dunn says, “and POLs suffer because of it.”

Dunn’s company works with Beckman Coulter, Brea, Calif, and bioMérieux, Durham, NC. Her company offers a comprehensive CLIA manual that leads POLs step-by-step on how to set up a lab and fully meet CLIA standards. Included is a year of unlimited toll-free CLIA-compliance support. One red flag: a proposal to require POLs to engage in competitive bidding for many CMS service reimbursements. “That would be a scary thing for the larger POLs who would have to compete on price with a Quest or a Lab Corp,” Dunn says.

So what factors contribute to a POL’s viability? Dunn ranked five of them:

A Perspective From COLA

“From our view, manufacturers are ramping up their products and service to the POL segment,” says Max Williams, director of policy and external affairs for the Commission on Office Laboratory Accreditation (COLA). A nonprofit accrediting organization originally founded by several medical associations that began working with POLs, COLA has now expanded to serve clinical labs of all sizes and types, including hospital facilities.

“They continue to develop new tests and fund R&D, including a focus on desktop analyzers for moderately complex tests,” Williams says. “The number of POLs is growing again after leveling off in the late 1990s and early 2000s.”

As for this year’s GAO report, Williams says there is no schedule for when the recommendations will be fully implemented. COLA, he says, participated for 15 months in collecting the information the report was based on and is working to address the GAO concerns.

Financial viability of a POL, as Williams sees it, depends more on how it manages its own costs and less on what kind of clinical testing it performs. However, the POL will be much more financially viable doing moderate-complexity testing as opposed to waived testing (which has higher unit costs per test).

“Reducing staff turnover, designing a quality-control program, the commitment to quality results—and therefore less repeat testing due to problems—these are all among variable costs that a POL can control to ensure profitability,” Williams says. “I don’t believe the national regulatory environment has changed that much.”

Better communication between the CMS, authorized survey agencies, and states is prominent among the GAO report. It concludes that trained assessors are critical to the process and that survey agencies should refine their oversight procedures. As for unannounced inspections, they may be needed in selected instances but they could prove a hardship and disrupt patient care for smaller POLs.

Williams says there have been minimal changes in federal rules on qualifications and experience for workers doing moderately complex tests—though some individual states have moved toward more licensure.

The most important consideration for today’s POLs, he says, is finding the right lab director. “It is critical that in his or her everyday role, the lab director is hands-on, actually doing testing rather than sitting in an office with paperwork,” Williams says. “The lab director leadership is critical. The director has to set the tone and be involved and committed to the highest-quality results.”

“Finally, in view of proposed changes in regulations, the lab director becomes more important, especially where equivalent quality control is used,” Williams says. While CLIA-waived labs are largely unregulated, there are exceptions. “Since 2002, CMS has been inspecting 5% of waived labs each year,” Williams says.

He says he has heard mostly negative reactions to a proposal to bring competitive bidding into CMS reimbursements. “I know Lab Corp has stated that it is fundamentally opposed to that,” Williams says. “That proposal would also include POLs with over $100,000 in revenues.”

As for criticisms that some product manufacturers are falling short in their support for POLs and compliance issues, Williams says he has encountered some concerns. “Of course, this hand-holding can be a double-edged sword. The lab needs to take responsibility for validation studies and quality processes themselves.”

Claire Pospisil, public information officer at New York State Department of Health, says CLIA made POL testing practices subject to government evaluation for the first time. Before CLIA, state law exempted in-office labs from permitting requirements as long as the in-office testing was conducted solely for patients of the provider and done by providers or their employees. Since 1992, POLs in New York must be CLIA registered to legally perform lab testing.

Pospisil sees two reasons that the state’s nearly 7,000 POLs are avoiding instrumented tests in favor of waived tests. “New technologies are increasing the number and types of tests available as waived and POLs using only waived methods are not subject to inspections or proficiency testing,” she says.

While oral surgeons and dermatologists may examine tissue on-site (such highly complex pathological examinations are subject to CLIA), other highly complex provider-ordered testing like molecular microbiology and genetic methods are often outsourced by a POL to a hospital or reference lab.

Pospisil says one of the greatest challenges for POLs is making sure that staff who are not trained as laboratorians or knowledgeable in laboratory science still employ good laboratory practices to produce reliable test results.

“This translates to something as simple as explaining why pregnancy test strips cannot be left on the radiator,” Pospisil says. The FDA mandates that manufacturers supply waived test-kit instructions that are clear and easy to understand, she says, is a step forward. (One federal study of waived test sites showed that about 60% of testing personnel did not follow manufacturer’s instructions.)

“POL operators are busy medical professionals,” Pospisil says. “If they cannot personally oversee their staff’s use of kit instructions and basic quality-control practices, and quality-assurance monitors, they should work with consultants who can assist in oversight by laying out policy and procedure manuals for the provider’s approval.”

What about cost-containment initiatives? Because payors are not increasing their fees, in-office testing involving costs such as employee time and instrument contracts become less attractive. Managed care organizations (MCOs) are entering into contracts with fewer laboratory providers to keep costs down, and under such a plan MCOs may not reimburse for in-office testing.

Pospisil believes POLs need to stay informed about regulatory and payment-policy changes. Trends? On the federal level, there is a Medicare competitive bidding demonstration project for lab services.

“As partnerships are being formed to face this challenge, POLs as testing providers need to become informed and identify the potential impact of regional contractors on access to and payment for in-office laboratory services,” Pospisil says. On the state level, tests for reportable conditions (such as lead poisoning and communicable diseases in New York) are becoming available in waived versions

For more than 3 decades, Polestar Labs, Escondido, Calif, has been helping physicians switch from outsourced tests to in-office testing. The firm’s SmartLab—on a fee-per-test basis—supplies staff and training for all levels of laboratory personnel; services instruments; monitors compliance with HIPAA, COLA, JCAHO, and Stark regulations; and provides guidance to lab directors.

Polestar CEO Mike Dunaway says the highest priority for a POL is understanding all the complexities of running a POL before beginning his service. The first step is deciding which instrumentation best meshes with testing goals. “Do the research to understand your test menu and volume requirements,” Dunaway advises clients.

Another concern, he says, is ensuring that the testing personnel a lab hires can both perform the quality testing and manage the moving parts of the lab—such as inventory control, supplier management, and regulatory management.

“Treat the laboratory as a profit-and-loss center within the practice,” Dunaway says. “Track all expenses, including testing labor, inventory, service charges, and overhead. Make sure that the test menu you choose can be done profitably.”

Dunaway says coding has continually become more stringent for POLs. Offices need to understand the reimbursement schedule for each insurance company, and recognize which tests when performed in-house will be reimbursed. The billing staff needs to have an active correction and rebill process for any denied claims.

As for regulations, he says the climate is growing stricter to ensure quality results.

“If a practice is going to invest in the instruments for a POL,” Dunaway says, “it must also invest in developing correct protocols and procedures to be compliant with state and federal rules.”

Polestar officials see an increase in the number of “retail boxes”—centers that provide a one-stop shop for patients, including primary care, outpatient surgery, pharmacy, x-ray laboratory, and more. When a practice has sufficient test volume that it makes economic sense to bring the lab in-house, a well-planned and well-managed moderately complex POL benefits the patients and the practice.

“A POL can perform the routine lab work at a quality level at least equal to a typical reference laboratory,” Dunaway says. “Having the lab on-site is a convenience to the patients, ensures compliancy, and brings in added revenue. The patient’s insurance will reimburse whoever performs the test, so why not keep the revenue at the practice level?” q

Nicholas Borgert is a contributing writer for CLP. For more information, contact .

@WebPlus: To read more search for “POLs” and “POCT” at the top of the page.