Pacifiers—used by up to 85% of infants in the United States—can be contaminated with harmful germs ranging from Staphylococcus aureus and Klebsiella pneumonia to mold, according to research presented at the 2012 American Society for Clinical Pathology (ASCP) Annual Meeting.

A contaminated pacifier grows a biofilm, a slimy coating of bacteria that changes the normal microbe balance in the mouth and is particularly resistant to antibiotics, researchers said. Biofilms can lead to inflammation that may increase the risk of developing colic or ear infections, and are caused by bacteria that have been linked to conditions such as depression, cardiovascular disease, and metabolic syndrome. There also is evidence that interactions between germs and the immune system can lead to allergies, asthma, and autoimmune diseases.

“Research shows pacifiers have their benefits, such as soothing infants and even protecting against Sudden Infant Death Syndrome (SIDS), but they’re easily contaminated and parents need to do a better job of keeping them clean,” says Jay Bullard, MS, manager of the Microbial Forensics Research Laboratory at Oklahoma State University Center for Health Sciences, Tulsa, Okla. “No one wants to eat with a dirty spoon in a nice restaurant, but parents often think nothing of picking a pacifier up off the floor at a mall and putting it back in an infant’s mouth.”

In the study, researchers collected 10 used pacifiers of different designs from healthy infants at a pediatric clinic. They minced the nipples and shields, placed them in a lab dish and looked at the cultures grown after 24 and 48 hours. They compared the results to seven new, unused control pacifiers. Five of the used pacifiers were lightly contaminated, and five were heavily contaminated with levels reaching as high as 100 million colony forming units (CFUs) per gram. Researchers cultured 40 different species of bacteria from the 10 pacifiers. One of the most contaminated pacifiers contained four different strains of staph. The new pacifiers all had microbial levels below 100 CFUs per gram, meaning they were considered sanitary.

“This study shows unclean pacifiers expose infants to a wide variety of microbes, and we’re at the early stages of learning the many and varied ways those germs can be harmful,” said William J. Becker, DO, MPH, FASCP, and medical director at Quest Diagnostics, Lexena, Kan. “But there’s an easy solution here–parents need to take a few simple steps to keep those pacifiers clean.”

When a pacifier pops out of baby’s mouth, it should be cleaned, no matter where it lands. Bullard suggests washing it with dish soap and cold water and letting it dry in the open air. It also can be soaked in a baking soda solution–one teaspoon of baking soda to eight ounces of water. Parents should keep several clean pacifiers on hand–stored dry in a clean baggie. If a pacifier pops out and there are no clean ones available, wiping it off with a tissue is better than nothing, as it prevents biofilm build up and removes some of the germs, Bullard said. Pacifiers should be cleaned daily and discarded every 2 weeks, or sooner if they show signs of wear, ripping or build up. 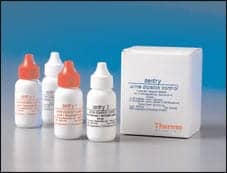