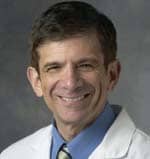 Stanley Rockson, MDScientists at the Stanford University School of Medicine, Palo Alto, Calif, have identified a set of proteins circulating in blood whose levels accurately flag the presence of lymphedema.

The findings, reported December 18 in PLoS ONE, spur optimism that this common but relatively neglected condition, which affects an estimated 10 million people in the United States, finally will be amenable to detection (and, eventually, treatment) with 21st-century techniques.

Lymphedema is an often-painful inflammatory condition resulting from the blockage of lymphatic vessels that ordinarily drain fluid from the tissues throughout the body. In the developed world, lymphedema most often arises as an unintended consequence of radiation therapy for cancer. For example, about one in four breast-cancer survivors eventually develops lymphedema, says Stanley Rockson, MD, professor of cardiovascular medicine and the study’s senior author. Numerous other factors, including parasitic infections endemic in some developing countries, can cause it as well, he says.

The blunting of normal immune-cell flow due to lymphatic-vessel blockage helps to trigger the buildup of fluid within the affected area of the body, along with thickening of the skin, profound inflammation, accumulation of fibrous tissue, excessive blood-vessel formation and a marked expansion of the fatty layer beneath the skin.

By the time the main symptom—swelling of one or more limbs—is detectable, the condition may have gotten such a foothold that it becomes difficult or impossible to reverse, at least given current treatment options, Rockson says.

The only known way to diagnose lymphedema now is via physical inspection, and all too often it is misdiagnosed or overlooked altogether. But the biological events underpinning this condition may be present 5 years or more before symptoms become evident, Rockson says. Moreover, there are no effective drugs for combating lymphedema, just costly, time-consuming physical therapy, which virtually never completely eliminates the symptoms, he says. While physical therapy can arrest progression and reduce swelling by as much as half, the condition typically remains a long-term problem. “Lymphedema virtually never just goes away on its own,” Rockson says. Indeed, it tends to progress in severity over time, whether it is treated or not.

The irreversible skin thickening, joint immobility, scarring, increased susceptibility to infection and other consequences of chronic lymphedema can leave patients discomfited for life, all too often resulting in social withdrawal, body-image deterioration and other quality-of-life issues. “This is especially ironic in the case of cancer survivors who have endured difficult life-saving interventions, only to find that now cured, they’re unable to enjoy their lives,” says Rockson, who is the Allan and Tina Neill Professor of Lymphatic Research and Medicine and chief of consultative cardiology at the medical school.

For this study, Rockson and his associates obtained skin-biopsy samples from both lymphedematous and normal tissue of 27 patients. Using advanced molecular methods, they compared each patient’s diseased tissue with that same patient’s healthy tissue to see which genes were more actively engaged in the generation of their respective protein products in diseased versus healthy tissue. Thousands of genes fit the bill. Then the investigators narrowed their search to the overproduced proteins themselves, in particular ones that were already known to circulate throughout the bloodstream of all people, including healthy ones, and for which fast, commercial blood tests already exist.

Statistical modeling indicated a panel of tests that measured six separate proteins’ levels in study subjects’ blood was able to distinguish the lymphedematous patients from control subjects who did not have lymphedema. None of these six proteins was predictive by itself. But in aggregate, their presence at certain levels and ratios appeared to serve as a biomarker for lymphedema.

Interestingly, all six proteins are well-known, and each is associated with one or another of chronic lymphedema’s hallmark biological features: accumulation of fibrous deposits, stimulation of fat-cell activity, inflammation and lymphatic-vessel formation and repair. “These biomarkers may themselves lead us to valuable pharmaceutical targets,” Rockson says.

To determine their six-protein biomarker-panel’s validity, Rockson’s group collected blood from a new cohort of 36 lymphedematous and 15 healthy adults, extracted blood samples and tested them with the panel. The test distinguished those with lymphedema from healthy subjects with an accuracy approaching 90%—good enough for use as a clinical diagnostic tool and a vast improvement over current detection methods, Rockson says.

“This is a significant development,” he says.

Because levels of the six proteins begin to climb early in the course of the disease, such a test should be valuable in determining risk for, or the onset of, lymphedema long before symptoms occur—which in turn would mean earlier, appropriate therapeutic intervention, perhaps in time to spare patients from the condition’s most-damaging effects or even reverse its course.

“In addition,” Rockson says, “a standardized, accurate bioassay for lymphedema could help to pave the road for future human clinical trials of drugs to treat it.” Monitoring trial subjects at the molecular level with a lymphedema-detecting blood test could provide early evidence regarding whether an experimental treatment is working. Rockson is involved in conducting clinical trials of pharmaceutical agents for lymphedema, and hopes to use the new test in those trials.

Capone to Present at the Jefferies Global Healthcare Conference