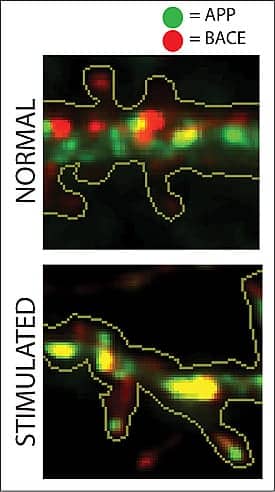 Top: Vesicles containing APP (green) and BACE (red) are normally segregated in neurons. Bottom: After neuronal stimulation, known to produce more beta-amyloid, APP and BACE converge in common vesicles, depicted in yellow.A group of researchers at the University of California, San Diego School of Medicine, San Diego, have investigated why only some brains develop Alzheimer’s disease (AD) despite the fact that all brains contain the basic “building blocks” of the disease.

While an estimated 5 million Americans have AD – a number projected to triple by 2050 – the vast majority of people do not and will not develop the devastating neurological condition.

The researchers suggest that the difference lies in the separation between a protein and an enzyme.

When combined, they trigger the progressive cell degeneration and death characteristic of the disease.

In a paper published in the August 7 issue of the journal Neuron, the researchers offer an explanation – a trick of nature that, in most people, maintains critical separation between a protein and an enzyme that, when combined, trigger the progressive cell degeneration and death characteristic of AD.

“It’s like physically separating gunpowder and match so that the inevitable explosion is avoided,” says principal investigator Subhojit Roy, MD, PhD, associate professor in the Departments of Pathology and Neurosciences at the University of California, San Diego School of Medicine, a cell biologist and neuropathologist in the Shiley-Marcos Alzheimer’s Disease Research Center at UC San Diego. “Knowing how the gunpowder and match are separated may give us new insights into possibly stopping the disease.”

The severity of AD is measured in the loss of functioning neurons. In pathological terms, there are two tell-tale signs of AD: clumps of a protein called beta-amyloid “plaques” that accumulate outside neurons and threads or “tangles” of another protein, called tau, found inside neurons. Most neuroscientists believe AD is caused by the accumulating assemblies of beta-amyloid protein triggering a sequence of events that leads to impaired cell function and death. This so-called “amyloid cascade hypothesis” puts beta-amyloid protein at the center of AD pathology 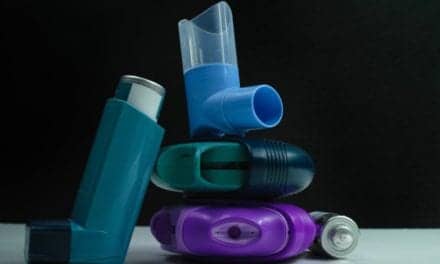 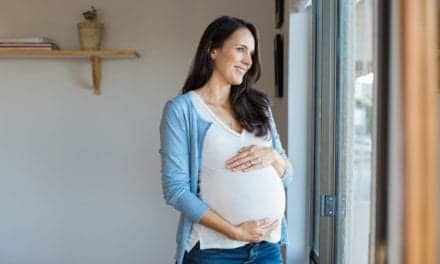