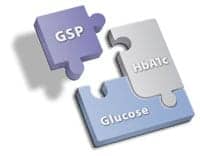 The diabetes epidemic is a looming crisis facing our health care system.1,2 It is imperative that screening populations at risk for developing diabetes be expanded so that diabetes can be diagnosed at an early stage, so that appropriate treatment and monitoring can be implemented. But what tests should be performed for screening, how should diabetes be diagnosed, and what additional tests should be done to monitor the diabetic patient?
The American Association for Clinical Chemistry (AACC) also endorses the use of HbgA1c for screening and diagnosis of diabetes, but the American College of Endocrinology and the World Health Organization state that endorsement is premature. 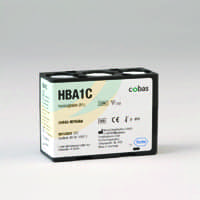 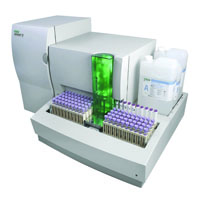 The Variant II Turbo Hemoglobin Testing System from Bio-Rad Laboratories is a high-volume laboratory hemoglobin A1c analyzer for diabetes monitoring. The Bio-Rad HPLC method from Bio-Rad Laboratories, Hercules, Calif, using an anion exchange column, has become the reference method for the test since it was employed in all sites that participated in the Diabetes Control and Complications (DCCT) study. The method is not without issues however, since hemoglobin variants can interfere with the assay. “Many of our newer anion exchange methods can report A1c in the presence of the most common heterozygous traits (E, D, S, and C) without any interference due to improved separation techniques,” says Scott Joksch, senior product manager at Bio-Rad Laboratories.
Interference from rare hemoglobins do exist as the variant can migrate in the same position as other peaks, interfering with HbA1c quantitation. The good news is that the interference is obvious, since the reported value of the HbA1c is usually physiologically impossible (too high or too low, depending on the method).
There are numerous immunoassays available on a variety of platforms, including many high-volume chemistry analyzers, POC devices, and dedicated immunoassay analyzers. Most immunoassays are not affected by hemoglobin variants such as hemoglobin S, C, D, and E, but do exhibit a negative interference if there are significant levels of hemoglobin F. The previously mentioned Roche assay, for example, warns against using the assay in the presence of the F variant. Fortunately, its presence is rare in adults. Immunoassays are often chosen because they can be run on integrated platforms with high throughput, making them suitable for laboratories with a high volume of requests. Immunoassays are also well suited to POC applications, allowing testing to be done in clinics, which provides immediate feedback to the patient. In most cases, immunoassays measure total glycated hemoglobin.
HPLC instrumentation with boronate affinity is offered by Trinity Biotech, Ireland, with US headquarters in Jamestown, NY. This method is free from interference from hemoglobins S, C, D, and E. However, concentrations of hemoglobin F > 15% will affect results. The issue is that the rate of glycation of fetal hemoglobin is lower than adult hemoglobin, leading to depressed values of glycated hemoglobin in such cases.
A capillary zone electrophoresis system, the Capillary 2 Flex Piercing, is available from Sebia, Norcross, Ga. It is also free from interference from all hemoglobin variants except levels of F hemoglobin > 15%.
Diazyme Laboratories, Poway, Calif, has developed a unique method using a direct enzymatic HbA1c assay. Douglas Borses, director, sales and marketing, Diazyme Laboratories, describes the procedure as follows:

Diazyme Laboratories has developed a unique method using a direct enzymatic HbA1c assay.    After the red cells are hemolyzed, the hemolysates are subjected to extensive proteolytic digestion, releasing the amino acids, including the glycated valines, from the ß-chain ends of the hemoglobin. The fructosyl glycated valines are oxidized by fructosyl valine oxidase, leading to the formation of hydrogen peroxide. The hydrogen peroxide is then measured in the presence of horseradish peroxidase and a chromagen at 700 nm. The method is not affected by hemoglobin variants S, C, D, and E. Interference from fetal hemoglobin has not been reported, but can be assumed to be affected at higher levels.
Borses has acknowledged that a drawback is a lysis pretreatment step.
The review of the various methods for HbA1c has focused on potential analytical interferences from hemoglobin variants. What has not been discussed is the effect the presence of variants has on red cell survival. Normally, the presence of single variant as a “trait” does not impact red cell half-life. The combination of hemoglobin S with C or homozygous C will cause varying degrees of anemia, which can result in a reduction of the glycated fractions simply because of the reduced red cell survival rate. This would make a diabetic in poor control appear to be normal. Although there is no analytical interference, there would be an error in the assessment of a patient’s diabetic status.

The role of glycated albumin
Glycated albumin is another marker for assessment of diabetic control. Because it is based on the half-life of serum albumin, it assesses the average level of blood glucose over a shorter time frame than the 2- to 3-month look back that is characteristic of HbA1c methods. Borses says that with the advantages of the newer enzymatic methods for glycated serum protein [(GSP)/Glycated Albumin (GA)], such as Diazyme’s Glycogap, we can also directly correlate the result to the sugar in the blood, providing a snapshot of the patient’s control over the preceding 2 to 3 weeks in a more rapid evaluation of effectiveness of diet, activity, or medication adjustments. 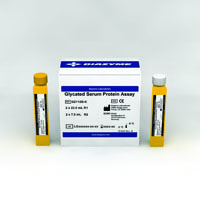 Diazyme Laboratories’ Glycated Serum Protein Kit.       There are also specific advantages to using GSP/GA where HbA1c is of limited value, he adds. GSP/GA is especially useful for monitoring patients on hemodialysis or peritoneal dialysis, as well as patients with gestational diabetes, hemolytic anemia, or blood loss. In a recent point-counter point,1,2 the pros and cons of using glycated protein in advanced diabetic nephropathy instead of HbA1c were debated. Barry Freedman, MD, in his point article, suggests that glycated albumin is the preferred marker. Kamyar Kalantat-Zadeh, MD, counters that HbA1c remains the gold standard outcome predictor in diabetic dialysis patients.
In a recent editorial that appeared in Clinical Chemistry,2 David Sacks, MD, reviewed the proposed use of the glycation gap and encouraged clinicians to continue using HbA1c to evaluate diabetics on dialysis. Borses says the difference between the actual measured HbA1c concentration and the predicted HbA1c from glycated serum protein is called the glycation gap, and recommends that physicians should measure both glycated protein and HbA1c in diabetic dialysis patients. He notes that several large laboratories are in the process of evaluating the use of glycated albumin in the diabetic dialysis patient. Soon we should have data from these clinical trials that answers the question. Borses says Diazyme has applications for many automated chemistry analyzers.

Related tests for diabetic patients
Microalbumin is a measurement of small quantities of albumin in urine, which is routinely conducted on diabetics to detect the early stages of diabetic nephropathy. It is readily available on many automated analyzers, and is commonly performed on spot urine collections and reported as the ratio of albumin in ug/dL to mg/dL of creatinine. Reference ranges should be  less than 30. Values above 30 may require therapeutic intervention. In diabetic patients, the test should be evaluated  every  3  to 6 months. The test method is a monoclonal immunoassay. Detection  limits for the immunoassay should be less than 10 ?g/mL.
Other tests recommended in diabetic patients include routine monitoring of serum electrolytes, and creatinine. Diabetes is a risk factor for cardiovascular disease, so a lipid panel should be added to the initial evaluation. Lipids should be followed periodically, since patients with poor control often have elevated triglycerides, a cardiac risk factor that is also associated with an increased risk for pancreatitis.
In an NACBlog post on April 16 on the American Association for Clinical Chemistry website, the question was asked, “What associated diseases occur in people with autoimmune (type I) diabetes that are not associated with type 2 diabetes?” There are strong associations with autoimmune diabetes and autoimmune thyroid disease (AITD), pernicious anemia, celiac disease, and Addison disease. AITD is most often manifested as Hashimoto thyroiditis and less often as Graves disease. Because of the high risk for AITD, physicians often screen patients with type I diabetes for thyroperoxidase antibodies. If these are negative, testing for thyroglobulin autoantibodies is appropriate. If either is positive, TSH and FT4 should be ordered yearly.
Both celiac disease and type I diabetes are associated with HLA class II genes on chromosome 6p21.4 The prevalence of celiac disease is on the rise in patients with type I diabetes, occurring with greater frequency than in the general population with estimates varying from 2.4% to 16.4%.5 A multicenter study in Italy found that in children less than 4 years of age diagnosed with type I diabetes, the risk of having celiac disease was three times higher than those diagnosed at age >9. Despite the higher prevalence of celiac disease, there is no consensus on screening patients with type I diabetes for celiac disease. The North American Society for Gastroenerology, Hepatology and Nutrition recommends the routine screening of all children with Type 1 diabetes. Diagnostic investigations for celiac disease include serological screening tests, tissue transglutaminase antibody (anti-tTG), endomysial antibody (EMA), and deamidated gliadin peptides (IgA and IgG DGP), but small intestinal biopsy, the current gold standard of diagnosis, is generally required to confirm villous atrophy. Currently, the only treatment for celiac disease is a strict gluten-free diet.

Conclusion
Tests for screening and diagnosing both type I and type 2 diabetes include fasting, 2-hour post prandial or random glucose, and hemoglobin A1c. The use of hemoglobin A1c for screening is not universally accepted.
Glucose, HbA1c, and microalbumin/creatinine ratio are routinely used to monitor a patient being treated for diabetes, along with periodic monitoring of lipids and electrolytes. There is a great deal of interest in the utility of glycated proteins for monitoring short-term average glucose values and in the hemodialysis patient with diabetes. In patients with type I diabetes, it has been observed that other autoimmune diseases occur concurrently. It may become the standard of practice to screen diabetic patients, particularly young children, for autoimmune thyroid disease, pernicious anemia, and celiac disease. 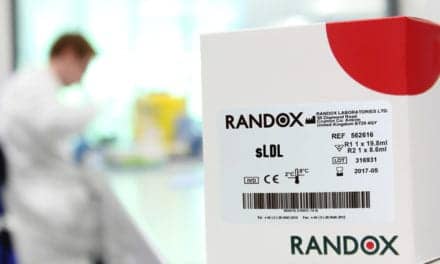 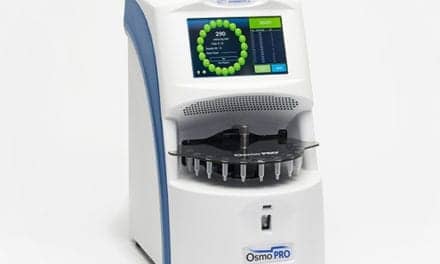