CRP cardiac marker transitions from research to clinical
One of the nation’s leading clinical chemists believes that current clinical tests that measure traditional risk factors for coronary heart disease — such as high cholesterol, high blood pressure, and smoking — fail to identify nearly 50 percent of Americans who will eventually have a heart attack.

Nader Rifai, Ph.D., associate professor of pathology, Harvard Medical School, and director of clinical chemistry, Children’s Hospital of Boston, is one of several scientists who now contends that the level of C-reactive proteins (CRP), produced by the liver and circulating through the bloodstream, is the single strongest predictor of future cardiovascular disease risk, and screening for this biological marker will reduce the incidence of coronary heart disease.

Rifai discussed the future of cardiovascular risk assessment using high-sensitivity C-reactive protein and lipid screening at this year’s American Association for Clinical Chemistry meeting in Chicago. His discussion followed publication of several articles on this topic in the Journal of the American Medical Association, New England Journal of Medicine and Clinical Chemistry.

Rifai contends that clinicians must abandon the conventional thinking that coronary heart disease is the sole consequence of a “mechanical problem,” the blockage in the blood flow caused by lipids leading to an embolism. New research has found that even patients with a small blockage still have embolisms that result in heart attacks; this results from plaque build-up and ruptures that contain inflammatory cells, all associated with excessive levels of the CRP.

Patients with CRP levels in the upper 25 percentile are three times as likely to incur a heart attack as those with lower levels. Fortunately, studies have found that aspirin and statins have been effective in lowering CRP levels. The predictive nature of CRP levels should lead to behavior modification in at-risk patients because individual CRP levels are not static; they increase with obesity, vitamin B6 deficiency and smoking cigarettes.

Rifai offers that clinical chemists and laboratory managers should be aware that universal CRP screening is a distinct possibility in the near future. The Centers for Disease Control and Prevention is actively engaged with the scientific community in the standardization of the high-sensitivity methods and in developing clinical guidelines for the utilization of CRP.

The eScreen drugs of abuse testing system, one of 28 winners across 10 medical product categories, received the award for the in vitro diagnostics category. The networked point-of-care system includes a specimen cup with an optical reader. The reader technology features Internet interface capability.

The system is able to scan and interpret negative drug test results and send the confidential report to a remote recipient via a secure Internet connection. Negative results are determined within minutes using eScreen’s proprietary, patented technology, versus the industry standard of 48 to 72 hours.

The fourth annual contest is the only awards program devoted exclusively to recognizing contributions and advancements in the design of medical products.

Duffey has held several key positions of increasing responsibility within the Dade Behring financial organization. Most recently his responsibilities included financial reporting, planning and analysis, as well as support for strategy and business development. He also has served as vice president, taxes, and corporate vice president, financial services. Duffey was promoted to senior vice president earlier this year.

“John has played an important strategic and leadership role in the finance organization and the company for many years, and I am pleased that he will be taking on the increased responsibility of chief financial officer,” said Jim Reid-Anderson, Dade Behring’s president and chief executive officer. “He and Jeff have worked together very closely, and I know the transition will be a smooth one.”

In a proposed rule, released August 20, on the Outpatient Prospective Payment System, the Centers for Medicare and Medicaid Services, said that “a significant pro-rata reduction could be required" for special “pass-through” payments to advanced outpatient technologies.

These cuts would force many patients back into the inpatient setting and drive up Medicare spending, AdvaMed warned. “Medicare patients and providers will continue to face the threat of these cuts until CMS acts to solve the problem,” AdvaMed president Pamela G. Bailey said. “CMS must rapidly implement solutions to avoid these cuts and preserve patient access to innovative treatments in the outpatient setting.”

AdvaMed is concerned that the proposed rule offers little additional information on how CMS will address the problem. CMS should delay its publication of a final outpatient rule so it can fully implement appropriate alternatives to steep payment cuts. Currently, CMS plans to implement changes to the outpatient program on Jan. 1, 2002.

“We are encouraged by the agency’s statement in the proposed rule that it is examining alternatives to deep payment cuts,” Bailey said. The proposed rule also begins the process of implementing one important change proposed by AdvaMed — shifting medical technology costs into the base outpatient payment rates. This revision, first proposed by AdvaMed, will help ensure that medical technology pass-through payments capture only the incremental costs of new technology as envisioned by Congress.

Over the past year, more than 70 members of Congress and 20 patient advocacy organizations have joined AdvaMed’s expressed opposition to the anticipated cuts.

Under the Cooperative Research and Development Agreement (CRADA), researchers at the University of Pittsburgh Medical Center led by Tony Godfrey, Ph.D., assistant professor of surgery, and James Luketich, M.D., associate professor of surgery, will identify and evaluate new genetic markers for several cancers including lung, breast, esophagus, oral, head and neck cancer and melanoma. Cepheid’s Smart Cycler, a commercially available instrument for rapid gene amplification and detection, will be used to validate these markers for detection of cancer in lymph nodes. Cepheid retains first rights to license and commercialize resulting diagnostic tests for its proprietary systems, including its next generation GeneXpert — a cartridge-based system that integrates and automates all the steps required to detect DNA in complex biological samples.

“Treatment decisions in oncology are strongly influenced by the extent of disease spread,” said Godfrey. “Molecular detection methods, while highly sensitive, have been too technically demanding to produce timely, consistent results. Working with Cepheid, our goal is to automate these complex tests using the GeneXpert system, and deliver definitive results to surgeons while the patient is in the OR, when time-critical treatment decisions need to be made.”

Conventional intraoperative methods that involve visual examination of lymph nodes under a microscope often fail to detect micrometastases. An estimated 10 percent to 20 percent of breast cancer and melanoma patients must undergo second surgeries due to undetected cancer spread. The new molecular tests will use a variation of the polymerase chain reaction (PCR) method of gene amplification to detect trace levels of cancer-related genes in less than 30 minutes. 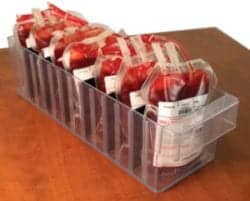