Scientists have discovered gene mutations that are the main cause of the inherited version of the childhood cancer neuroblastoma. In addition, the researchers found that the same mutations play a significant role in high-risk forms of non-inherited neuroblastoma, the more common form of the disease.

“This discovery enables us to offer the first genetic tests to families affected by the inherited form of this disease,” said pediatric oncologist Yael P Mossé, MD, of The Children’s Hospital of Philadelphia, the first author of the study, published online Aug. 24 in the journal Nature. “Furthermore, because there already are drugs in development that target the same gene in adult cancers, we can soon begin testing those drugs in children with neuroblastoma.”

Because only about 600 new cases of all forms of neuroblastoma occur annually in the US, familial (inherited) neuroblastoma is a very rare subset of a relatively uncommon disease. Scientists at Children’s Hospital have studied familial neuroblastoma for the past 15 years, and the current study drew on family data collected from throughout the world.

John M Maris, MD, senior author of the current study and director of the Center for Childhood Cancer Research at Children’s Hospital, leads a laboratory with the world’s largest collection of neuroblastoma tissue samples, gathered through the multicenter Children’s Oncology Group in the US and through multiple international collaborations. Maris said, “This is a very important discovery, as it not only helps us understand the genetic roots of this terrible disease, but also has led to dramatically new ideas for curative therapy.”

The study team used high-speed, automated analytic equipment at the Center for Applied Genomics at Children’s Hospital. By employing genome-wide scans to analyze DNA from the 10 most informative families with a history of neuroblastoma, Mossé and her colleagues first discovered that a region of chromosome 2 was associated with the disease. Further sequencing of that region identified mutations in the anaplastic lymphoma kinase (ALK) gene in eight families with familial neuroblastoma.

“This finding means that it is possible to offer simple, non-invasive screening for patients with a family history of neuroblastoma,” said Mossé. She explained that ultrasound or a urine test could assist surveillance of children with an ALK mutation, so that if neuroblastoma appears, it can be detected at an early stage. “As we increase our knowledge of ALK mutations, we will also offer specialized diagnostic testing for all newly diagnosed patients with neuroblastoma, to eventually allow oncologists to better customize treatment to a child’s genetic profile.”

After detecting ALK mutations in familial neuroblastoma, the researchers then focused on the more common sporadic (non-familial) cases of neuroblastoma, and found that ALK mutations occurred in 12 percent of 194 tumor samples from the aggressive, high-risk form of the disease.

Although the normal role of the ALK gene is not well understood, other researchers had previously found that abnormalities in ALK raise a patient’s risk for lymphoma and lung cancer. “We were the first to identify mutations in ALK,” said Mossé, adding that in lymphoma and lung cancer, ALK acts through translocation, a different mechanism that involves an exchange of DNA between chromosomes to produce a new cancer-causing fusion gene.

In all three cancers, ALK acts as an oncogene, or cancer-causing gene; in fact, the current study reports the first example of a childhood cancer caused by mutations in an oncogene. Since the mutations discovered by Mossé trigger an “on” signal for neuroblastoma cells, the abnormality is an outstanding target for therapies that inhibit the ALK protein’s activity.

Several pharmaceutical companies are currently developing ALK inhibitors in the laboratory, and one ALK inhibitor is already in early-phase adult clinical trials against lung cancer and lymphoma. Now Mossé and her colleagues at Children’s Hospital are planning pediatric clinical trials of ALK inhibitors in children with high-risk neuroblastoma. “It’s an advantage to be able to start with agents that have already been shown to be safe in adults,” Mossé added.

Neuroblastoma has long been a puzzling disease, partly because of its broad range in outcomes. Some types of the disease strike infants but spontaneously disappear with minimal treatment, while other subtypes in older children may be relentlessly aggressive. Earlier this year, Maris’s lab reported that common DNA variations in a region of chromosome 6 raise a child’s risk of developing sporadic neuroblastoma. “Together with this current study, we are defining the genetic events that underlie this childhood cancer,” said Maris. “Better understanding of these biological pathways will guide our efforts to develop more effective treatments.”

The National Institutes of Health supported the study, along with grants from the Alex’s Lemonade Stand Foundation, the American Society of Clinical Oncology, the Andrew’s Army Foundation, the Italian Neuroblastoma Foundation, Scripps Genomic Medicine, the Scripps Dickinson Scholarship, the Giulio D’Angio Endowed Chair, the Foerderer-Murray Fund and the Carly Hillman Fund. The Center for Applied Genomics at The Children’s Hospital of Philadelphia also provided support, as did the Abramson Family Cancer Research Institute of the University of Pennsylvania School of Medicine. The study could not have been done, say the authors, without the support and resources of the Children’s Oncology Group.

Among Mossé’s and Maris’s co-authors were Garrett M. Brodeur, M.D., of the Division of Oncology and Center for Childhood Cancer Research at Children’s Hospital, as well as Hakon Hakonarson, MD, PhD, director of the Center for Applied Genomics at Children’s Hospital. The above co-authors are also faculty members of the University of Pennsylvania School of Medicine. Other collaborators were from the National Institute for Cancer Research, Genoa, Italy; Ghent University Hospital, Ghent, Belgium; Scripps Research Institute, La Jolla, Calif.; and the University of Rome “La Sapienza.” 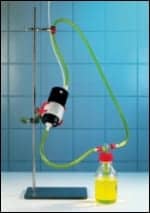 AACC to Broadcast from Annual Meeting Via Web