Specific chemical modifications to proteins called histones, which are found in the nucleus of cells and act as spools around which DNA is wound, can be used to predict prognosis and response to treatment in subsets patients with pancreatic cancer, a study by researchers at UCLA’s Jonsson Comprehensive Cancer Center has found.

High levels of two specific histone modifications in tumor cells of patients who underwent surgical resection of their pancreatic cancer predicted those patients more likely to derive survival benefit from the commonly used chemotherapy drug Fluorouracil, or 5-FU. Along with Gemcitabine, 5-FU is a common chemotherapy used to treat patients with pancreatic cancer, the fourth deadliest cancer in the United States.

“These histone modifications were useful in predicting whether or not a patient was likely to respond favorably to 5-FU” said Dr. David Dawson, an assistant professor of pathology and laboratory medicine, senior author of the study and a Jonsson Cancer Center researcher. “Using a specially devised test and algorithm, we were able to discriminate two groups of pancreatic cancer patients who were more or less likely to have longer disease-free remissions and overall survival.”

The histone modifications themselves also may prove to be future targets for drug therapies, Dawson said.

The study, which needs to be validated in a prospective study, was published this week in the peer-reviewed Journal of Clinical Oncology.
Jonsson Cancer Center researchers, led by Dr. Siavash Kurdistani and Dr. David Seligson, developed and patented the immunohistochemistry assay, or antibody test, to measure the levels of the specific histone modifications within cells. The rights to that technology have been licensed by an outside company.

Kurdistani and Seligson, also authors on the study, previously used the test to identify the same histone modifications in subsets of patients with prostate, kidney and lung cancers. They showed that low cellular levels of the histones could determine which prostate cancer patients were more likely to suffer a recurrence and which patients with lung and kidney cancers would experience poorer survival rates.

The current study centered on a field known as epigenetics, which focuses on inherited information other than that directly encoded by DNA. In addition to genetic mutations, epigenetic changes such as alterations to histone modifications contribute to the development of cancer, said Kurdistani, an assistant professor of biological chemistry.

“Overall, these histone modifications are providing useful information as to how a cancer may behave,” he said. “In addition, there may be a direct causal link between these changes and tumor aggressiveness.”
The tissues used in the study came from a 195- patient cohort enrolled in the Radiation Therapy Oncology Group 9704 trial, a multi-center, phase III study of pancreatic cancer comparing adjuvant Gemcitabine with 5-FU, and a separate, 140-patient cohort of patients with stage I or II pancreatic cancer from UCLA.

Generally, low levels of histone modifications were found to be predictors of poor survival in both patient cohorts, and to identify those less likely to respond to 5-FU in the 9704 patient cohort, the study reports.

“Pancreatic cancer is a highly aggressive and lethal cancer for which there are limited therapeutic options,” the study states. “Along with genetic events, tumor-associated epigenetic alterations are important determinants in the initiation and progress of pancreatic cancer and represent promising biomarkers and therapeutic targets.”

It may take three to five years to develop a commercially available test that could be used on prostate, kidney, lung and pancreatic cancer patients, Kurdistani said.

Next, Kurdistani and Dawson will be pursuing studies in cell lines and animal models to determine what if any role the histone modifications have in causing the development of aggressive forms of pancreatic cancer.
“If you can uncover the mechanism of how the histone modifications are associated with cancer development and/or progression, you may be able to design strategies to interfere with that process,” Kurdistani said. “Such a strategy could be the basis for a targeted therapy or chemoprevention approach.” 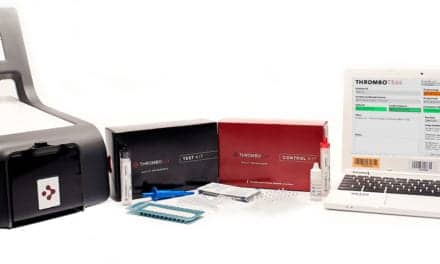 LightIntegra Technology Receives $5.4 Million to Bring Platelet Activation Test to the US Market