Rheumatoid arthritis (RA) is a chronic, progressive inflammatory joint condition that causes pain, swelling, stiffness and loss of function, not only in the joints, but also muscles, tendons, ligaments and bones. It typically begins in smaller joints, usually the feet and hands, and can move on to elbows, knees, wrists, ankles, etc. RA can lead to destruction of cartilage and periarticular erosions into bone.

An autoimmune disease more common in women than men, RA may be associated with multi-organ involvement in some patients. One recent study that will certainly lead to further investigation linked this inflammatory disease in women with a two to threefold higher than average risk for myocardial infarction.

The diagnosis of RA at present is primarily clinical, based on certain characteristics of patient history and physical exam that increase the index of suspicion that RA underlies the symptoms a patient is experiencing. It can take months to several years to arrive at a diagnosis of RA, and during that time there is irreversible damage done to the joints and bones. In the last several years, with the advent of more effective therapeutics, it has been shown that the earlier treatment is initiated, the more likely it is that the disease can be effectively modified and outcomes improved. Ideally, patients would be treated much sooner after the onset of disease than we find in common practice today.

Approximately one percent of the population has rheumatoid arthritis. Many people may have mild to moderate disease that never comes to clinical attention, but among those with advanced disease, 40 to 60 percent will die 10 to 15 years earlier than expected.

Among RA patients, 70 to 80 percent have a positive rheumatoid factor (RF), while the rest are seronegative. A positive RF finding by itself, however, cannot provide a clear diagnosis, as it may also be associated with a number of unrelated conditions. Erythrocyte sedimentation rate (ESR) and C-reactive protein (CRP) are sensitive indicators of inflammation in RA that may be used to support a diagnosis.

Patients with appropriate referral and access to a rheumatologist are likely to fare better when it comes to obtaining a timely diagnosis, a position that was clearly presented at the American College of Rheumatology annual scientific meeting this past October (2002). Gregory Dennis, M.D., director of clinical care and training at the National Institute of Arthritis and Musculoskeletal and Skin Disease, and a practicing rheumatologist himself explains, “RA is not a simplistic disease. There is wide variability in patient presentation, and how individuals look in terms of their physical examination. We don’t have any specific test that one can do to confirm a diagnosis with 100 percent certainty. RF can be seen in many different disorders, and this compounds the situation further. That’s why rheumatologists and others who are familiar with patients who have RA advocate insuring that you are seen by someone who has experience in the evaluation, diagnosis and management of individuals with RA.”

Without a widely used and definitive test, a diagnosis of RA can be missed or made in error. Rheumatologists also see patients whose primary care physicians had made a diagnosis of RA and initiated therapy, only to find that therapy was ineffective, and upon referral to a rheumatologist for further consultation it is determined that RA is not the cause of the patient’s symptoms. Rheumatologists as well may face a period of uncertainty, both in diagnosis of RA and in how aggressively it should be treated. According to Dennis, “Initially, a physician will observe a patient or treat them with agents that may not necessarily be effective in significantly controlling the disease, until they are more confident that RA is in fact the diagnosis. That period of time can be anywhere from 2 weeks to 6 months, and within that window significant anatomical abnormalities can occur. If we had something, especially a laboratory test that would indicate during this period of clinical uncertainty that the patient has the type of RA that is more likely to result in a bad outcome, then we would be able to implement effective therapeutic strategies earlier in their disease course. We suspect that by doing so we would have a much greater chance for actually putting the disease into remission and perhaps cure.” It is known that individuals who have high titers of RF are more likely to develop significant erosive disease, and thereby be at greater risk to develop functional disability and have a poor quality of life — but that is not always the case.

Current treatment most often involves methotrexate, either alone or in combination with anticytokine therapy. Methotrexate, though a drug used to treat malignancy, is given to people with RA in a fraction of the dosage over a longer period of time – from 7.5 to 20 mg per week, and then supplemented with other medication if there is no significant response after three to four months. Anticytokine therapy has been shown to play a pivotal role in inflammatory response and is resulting in marked improvement in the overall clinical course of people with RA.

The side effect profiles of these medications, says Dennis, are worth the benefit of taking them, provided the correct diagnosis is RA and not a more benign form of arthritis. Future studies, he believes, will focus on examining clinical response from newer RA medications, and also looking at perhaps less aggressive therapies in some patients whose disease is not severe.

Then or now, effective management of RA will involve both proper prescription and careful monitoring over time, to ensure a rapid response to any ill effects related to the medication, hopefully even before clinical symptoms of difficulty appear (including monitoring for hepatotoxicity, pulmonary or myelosuppression effects). These may be detected through laboratory studies, patient report, or observation on physical exam. Baseline screenings (such as liver function, CBC with platelets, chest X-ray, TB skin test) are done prior to initiation of medication. A physician may look at blood counts, blood chemistries, and acute phase reactants not only to assess the response to therapy, but also to be sure that results correlate with the physical exam. As inflammation markers, Sed rate and CRP can also indicate infection, particularly if there is clinical reason for suspicion. And urinalysis may be done if there is reason to suspect that medication could be adversely affecting the kidneys.

There are tests under investigation that may provide more definitive diagnostic tools. A group of antibodies called anti-cyclic citrillinated peptide (anti-CCP) antibodies are available and FDA-approved to aid in the diagnosis of RA. Anti-CCP may prove useful in distinguishing RA from other diseases that present in a similar fashion, and determining severity of disease. “Thus far,” says Dennis, “these particular antibodies have been implicated in the identification of individuals who have more severe disease, but this is  something that is still rather preliminary and needs to be investigated more closely.”

Other rheumatoid-arthritis specific autoantibodies are currently under investigation that may help diagnose and stratify RA with greater confidence. Says Dennis, “There are a couple of other antibodies that are indirect immunofluorescence antibodies. These tests are antikeratin antibodies, or AKA, and the antiperinuclear factor antibodies, or APF. We’ve actually seen some recent reports of these AKAs and APFs being potentially useful to predict structural damage in individuals who have early RA. That would imply that if we had the ability to test patients for these antibodies, as well as doing the anti-CCP antibodies, we might be able to determine whether a patient’s prognosis is likely poor and perhaps treat them more aggressively earlier on. If this information pans out, the idea would be to identify those particular patients who have severe disease while they’re still in their early stage and if you knew that with confidence, you would probably treat them more aggressively.”

As with other autoimmune diseases, a combination of genetic predisposition and environmental triggers may be at work in RA. The genetic marker HLA-DR4 is viewed primarily as a potential predictor of more severe disease, rather than a predictor for its onset. Further genomic studies are already underway that look at twins and close brothers and sisters with systemic rheumatic diseases. A newly published multi-center study also identified likely familial linkages outside the HLA region.

The NIH is also focused on research that looks at patient response to anticytokine therapy, in an attempt to better understand the differences between responders and non-responders. The aim is to identify key components in the inflammatory pathway that may allow the development of targeted therapies. Epidemiological studies also hope to shed light on why some people suffer more, while others have a disease course that is far less disabling. One important prescription we are already certain applies across the board includes rest, exercise, healthy diet and weight control.

Irene Fried is a freelance writer in Raleigh, N.C. 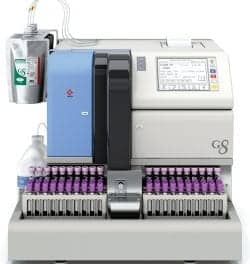 All for Testing—But Maybe Not Glycemic Testing for All