As often as it gets tossed about at hospitals and laboratories today, the term standardization is missing only one thing: a standard definition.

Ramon Benet, vice president of marketing, sales and service at Instrumentation Laboratory, a leading supplier of blood gas analyzers, has seen standardization from all sides. For a hospital group, standardization refers to unifying all of the hospital members of the group into a single supplier. By committing to a greater test volume, the facility gets a pricing advantage from the test manufacturer.

Within the lab, standardization, Benet said, usually refers to use of a single manufacturer for several related test areas. Likely benefits include better pricing and easier connectivity to a lab automation system.

Then there’s time-sensitive testing for critical care, often done at many labs and locations. “In this context,” Benet said, “standardization has meant having all testing locations use the same manufacturer, although each location could be using a completely different product from that same manufacturer.” Instrument logos were standardized, but products were not. That’s how IL first approached the concept in 1997.

That changed in mid-2000 with introduction of the Gem Premier 3000 blood analyzer and a move into “true standardization” for its customers. The new product enabled all hospital test locations to use the exact same instrument. The Gem Premier analyzer designer incorporated sensors, solutions, tubing, waste container and sampler into a single disposable cartridge. IL provides 27 different cartridges — each customized to the specific analyte menu and volume of each test location.

“It has been extremely successful,” Benet said. “Boston Biomedical Consultants [market research firm] just reported that the Gem Premier 3000 was the No. 1 analyzer sold in North America in 2002, with a market share 1.7 times greater than the nearest competitor.”

The quality of patient care can be influenced by a hospital’s decision to standardize with a single manufacturer, said Benet. Consistency of results, reliance on accepted quality control procedures and simpler testing operations and training all ultimately benefit patients. The IL system, he said, is small and requires a low level of capital investment. “In addition, most hospitals follow the route of the reagent rental, making it possible to convert an entire institution to a single standardized system without any capital expenses,” Benet said.

Bayer Perspective
Bayer Diagnostics is the number one producer of blood gas analyzers in the U.S., according to Brad Ditmar, senior marketing manager for near patient testing at Bayer.

For Ditmar, standardization relates to hospitals and laboratories dealing with one company rather than one platform. Bayer’s popular Rapidpoint 400 analyzer is a cartridge-based, touch-screen POC unit providing 60-second turnaround for nine critical analytes, plus automatic sampling and quality control.

Bayer’s Rapidsystems approach consists of RapidLab systems for laboratory use and Rapidpoint for point of care applications. Pulling it all together, said Ditmar, is Bayer’s RapidLink, a system manager and a data manager. “With RapidLink, customers are able to control their data, their instruments and the entire testing process,” Ditmar said.

Patient care and standardization are directly connected in cases where a doctor or nurse runs a critical care test on a patient and makes clinical decisions at point of care. “They have to have confidence in the consistency of results and standardization adds to that,” he said.

Decentralizing Analyzers
While portability has always seemed a vital element to POC, some hospitals are taking a different approach. Fairview-University Medical Center in Minneapolis has standardized its blood gas analyzers. In addition, the facility decentralized its blood gas testing to better serve the needs of its laboratory and critical care staffs.

According to Senn, locating larger, more versatile benchtop analyzers close to the point of care has enabled the medical center to maintain quality and cost efficiency while providing faster turnarounds. Patient care benefits from more rapid clinical decisions and closer interaction between clinical and lab staffs.

“Our goal is to get the testing results into the electronic medical record as quickly as possible,” she said. Benchtop analyzers, centrally controlled and maintained, are linked to Fairview’s laboratory and hospital information systems by analyzer management software that supports the decentralized testing.

“Everything goes in cycles,” Senn said. “Once, everybody wanted testing done at the bedside. But now our nurses have too much to do and our physicians don’t want the responsibility for point of care testing; they want us [the lab] to perform the testing in a manner that meets their needs.”

Recent findings by polling firm Bioinformatics Incorporated suggest portability isn’t that important to clinicians, either. Asked to rank various POC features in importance to them, the clinicians placed faster turnaround times, improved patient outcomes and test accuracy at the top of their list. The issue of portability/mobility ranked at the bottom of the five features rated.

“I don’t think it has anything to do with patient care; it has to do with economics. It  really makes a lot of sense to standardize things across a hospital or point of care testing environment,” she said. “The whole standardization concept does have merit. It saves money, and it may cut down a little bit on medical errors because there are less reagents interspersed around and less expired reagents that people could inadvertently use.”

Nicholas Borgert is a freelance writer based in Charlotte, N.C. 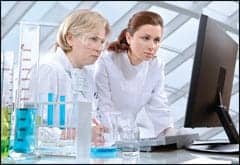