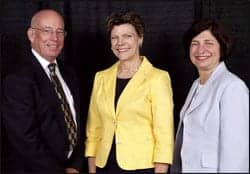 The annual meeting of the American Association for Clinical Chemistry (AACC) kicked off for me one day before the exhibit hall opened with a special event sponsored by Olympus America Inc, Center Valley, Pa. The day began with a luncheon with Cokie Roberts, wellknown political analyst and commentator, and about a dozen industry leaders, including AACC past and incoming presidents, Dr John Sherwin and Dr Barbara Miriam Goldsmith. Sherwin is also current president of the Van Slyke Foundation. Following the luncheon, Roberts presented the third annual Olympus Partnership Awards and delivered an address to a packed crowd of AACC attendees.

Roberts, who has covered politics and public policy for media outlets including ABC news and National Public Radio, spoke on the topic: “How Healthy is the Healthcare Debate?” Roberts accepted an Olympus Partnership award on behalf of the St Thomas Community Health Center of New Orleans (her original hometown), which she says has done exceptional work serving the population of New Orleans post-Katrina. The AACC’s Van Slyke Foundation was also presented with an award, which it will use to fund travel for international visitors to AACC, according to Sherwin.

Roberts, whose parents served in Congress for a combined total of 50 years (“so you can imagine how I feel about term limits,” she quipped) has been in a unique position to observe how members on both sides of the political aisle are viewing issues, including that of health care. During her address, Roberts summarized the health plans of both major party candidates, but said that she didn’t see wholesale overhaul in the near future. Specifically, she said that she doesn’t see the system veering toward either extreme of going to a single-payor system or eliminating government involvement altogether.

Roberts Looks at Both Sides of the Aisle

Republicans, Roberts described, would like to get away from employer-provided health care and use a combination of tax credits and tort reform to support health care costs. Democrats favor an approach that eliminates tax cuts for upper brackets and provides publicly funded plans to owners of small businesses. Roberts said that neither party “will cut out the private insurance companies,” and that, in her opinion, universal health care “is not going to happen.” Rather, she believes, a patchwork approach is more likely.

Roberts pointed to poll data that says health care has consistently been among the top three issues voters care most about in this election, alongside the conflict in Iraq and the general state of the economy. Therefore, Roberts said that she thinks the issue will be taken up fairly early in the 2009 Congress. To illustrate the burden of health care costs on American citizens, she pointed to a rise in insurance premiums over the last couple of decades of 78% as compared to wage increases of 18%. Furthermore, she said, health care costs are only projected to rise, citing study data that display an increase from 15% to 20% of gross domestic product during the 15 years between 2002 and 2017. Congress knows they will “look irresponsible if they don’t do something soon,” Roberts said, adding, “but they have looked that way before.”

At the small luncheon preceding her talk, Roberts spoke candidly with guests who included lab directors from the SUNY Downstate Medical Center in New York and the University of Texas, as well as representatives from several diagnostic companies. In response to questions from the group, Roberts spoke about the need to ensure greater access to health care for a greater number of Americans. She pointed to measures taken across party lines by several states, including in her home state of Connecticut, where the governor has instituted a program to identify and sign up all uninsured children at the time they enter school.

As Roberts pointed out, however, “the states can’t do it all.” They are dependent on the economy at large, including how much they can raise in taxes, and are also relying on funds paid out through tobacco settlements. The irony, she said, is that as states are successful in getting people to stop smoking, which all agree is an important public health mission, funds for other health initiatives “dry up.” Roberts entered into a discussion with Sherwin about the newborn screening program instituted in California, and both agreed that access to a “captive population” contributes to the success of both programs.

Roberts also noted, and many at the table agreed, that issues with screening programs for adults are due not only to lack of access but to the fact that many people put off doing the tests that they know they should do.

The Next Generation of Laboratorians

The graying of the clinical lab industry was another hot topic at the luncheon, with one participant citing data that the median age of laboratorians is now 48. Attendees were also very concerned about the closure of many medical technologist training programs, an issue of which Roberts had not been aware. Sherwin and others discussed how AACC is implementing outreach programs, including the new international program funded by the Olympus award, that are trying to bring in new blood to the profession.

After the luncheon and presentation, I had the opportunity to sit down and chat briefly with Sherwin and Goldsmith about the Van Slyke Foundation and its award from Olympus. It is clear that they are placing a priority on reaching out and educating potential new laboratorians, especially young people making career decisions, about the clinical laboratory profession. They discussed initiatives including movements to bring undergraduate students directly into hospital labs to get exposure to on-the-bench training. The funds received from Olympus will be used to increase the organization’s global reach by making it possible for laboratorians from emerging countries to visit the United States and attend the AACC annual meeting.

According to Mike Krenz, vice president of sales, and Hiro Sekiya, director of marketing for diagnostic systems, the Olympic Partnership Awards are a way for the company to take the funds they might have spent on entertainment and find a way to give back to and enhance the clinical lab community.