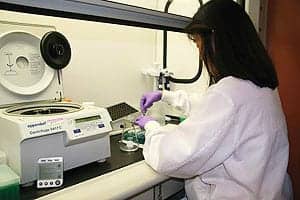 With carcinomas capable of occurring in virtually every area of the body, early, rapid, and accurate laboratory testing to detect their presence and determine methods of treatment is vital. Diagnostic methods include biopsies, endoscopies, X-rays, CT scanning, MRI scanning, ultrasound, and other radiological techniques, nuclear medicine and blood tests, including tumor markers. These methods are not only effective in diagnosis; they (especially CT scanning) can also determine operability—that is, whether it is surgically possible to entirely remove a tumor. And some can even provide information on the effectiveness and advisability of such treatments as chemotherapy.

According to Mark Cross, director of marketing and business development, Biocare Medical, Concord, Calif, molecular pathology is one of the fastest-growing segments in the anatomic pathology laboratory. Until now, these tests have largely been the domain of high-volume hospital and reference laboratories. Time-intensive and complex procedures and interpretation criteria have necessitated specialized training in order to successfully perform these tests. As a result, in the United States approximately 80% of molecular testing done by anatomic pathology labs is performed in about 60 commercial laboratories.

“Fortunately, new technologies are being introduced which make advanced molecular technologies accessible to virtually any anatomic pathology laboratory. In May of this year, Biocare Medical introduced the novel RISH™ product line, a simplified in situ hybridization (ISH) technology that provides ISH results in about 2.5 hours,” Cross says.

The RISH test menu initially includes kappa and lambda as well as an Epstein-Barr virus test (or EBER, for Epstein-Barr Encoded RNA). Numerous human tumors are associated with EBV, including non-differentiated nasopharyngeal carcinoma; African Burkitt’s lymphoma; Hodgkin’s disease mixed cellularity; some B, T, and NK lymphomas; and lymphoproliferative processes associated with immunodeficiency. Kappa and Lambda tests are used for diagnosis of mono- versus polyclonality in lymphoid tumors, lymphoproliferative syndromes, and myelomas.

The RISH procedures eliminate the need for denaturing DNA probes at high temperature, allowing the probe to be hybridized in a single step, Cross says. After the posthybridization wash, detection proceeds in a manner identical to immunohistochemistry (IHC) detection. A secondary antibody is added, which binds to the digoxigenin (dig)-labeled probe. Then a polymer detection reagent is applied. To simplify interpretation and allow for archivability, a chromogenic label (DAB) is used. Highly toxic buffer components such as formamide are eliminated.

The first Multiplex ISH test, newly launched, enables simultaneous testing of kappa and lambda markers. The RISH Dual Kappa/Lambda kit reduces hands-on labor even further, requiring fewer slides to be cut and processed. For the pathologist, kappa:lambda ratios are simplified, since they can be counted on a single slide. A RISH test for CMV has also been introduced.

Another test that has simplified molecular analysis was introduced 2 years ago, Cross notes. Biocare’s SPOT-Light® HER2 CISH test for HER2 gene amplification provides archivable slides and greatly simplifies interpretation, allowing most slides to be scored in seconds compared to 10 to 15 minutes for FISH methods.

Simplified molecular tests such as RISH and SPOT-Light HER2 CISH are steadily making their way into the anatomic pathology market, making such tests accessible to more laboratories. This results in reduced costs, increased revenue for the local lab, faster turnaround time, and easier diagnosis, vastly improving patient care, Cross says.

“Whatever the call, it is clear that the time-honored ways in oncology of morphological diagnosis and empiric (‘trial and error’) choices of cytotoxic chemotherapy can now be evaluated from the perspective of cell function, tumor biology, and selection of new therapies utilizing molecular targets specific to the tumor cells,” he says. Coonan notes that this is manifest in the pharma industry as a shift from the blockbuster drug approach (“one size fits all”) to the development of targeted drugs with an emphasis on having a “larger share of a smaller market.”

In the diagnostic market, he sees a shift from cell-based assays using fresh tissue to gene-based assays using paraffin-embedded formalin-fixed tissue to identify specific molecular targets (one of which is Genomic Health’s Oncotype® DX assay, discussed below). “To continue to utilize morphologic pathology as the guiding basis for cancer treatment is to accept the woeful response rates, survival times, and high resistance development rates of cytotoxic therapies,” he says.

However, he says, there has still been a lag in academic center translation of biomarkers to the clinical arena, especially in the area of gynecologic malignancies. Thus far, no prognostic or predictive biomarkers have been validated and commercialized for ovarian, endometrial, or cervical cancers. The challenges are well-identified, and early diagnosis of ovarian cancer remains an enigma. Up to 70% to 80% of ovarian cancers become platinum-therapy resistant, and there are no objective markers to guide subsequent choice of therapy, Coonan says. It has been well established that up to 20% of Stage I endometrial cancers are likely to behave aggressively with early recurrence even though they have an undistinguished microscopic appearance. There is documented 40% discordance in the morphologic pathological diagnosis of atypical endometrial hyperplasia versus cancer, Coonan says, and the list goes on.

Molecular testing continues to grow in the oncology diagnostics space.

“It seems self evident that each newly developed targeted therapy should ideally have a companion diagnostic biomarker to properly identify the patients benefiting from the drug and ensure the most efficient trial validation for these drugs. Multiple financial models have also demonstrated the potential economic advantages of molecular profiling of cancers performed prior to targeted drug use. The key to integration of molecular biomarkers and gene-based signatures into clinical practice lies in their proper validation and demonstration of cost-effectiveness in the clinical setting,” Coonan says.

Advantages to utilizing the PCR and CGH platforms include use of paraffin-embedded formalin-fixed tissue, rapid time to market via CLIA laboratory validation, and simplified reimbursement procedures since algorithmic-based arrays and FDA approval are not required. OvaGene will also have as an intermediate and long-term priority the development of predictive molecular biomarkers of platinum therapy resistance, particularly identifying DNA repair and antiangiogenesis diagnostics. These are projected for introduction in 2013.

The assay measures the expression of 21 genes of an individual tumor to generate a Recurrence Score® result that quantifies the magnitude of chemotherapy benefit and the likelihood of recurrence for early-stage breast cancer patients. Shak describes the test as an optimized assay process that uses samples gathered in a standard way; ie, by breast surgery (lumpectomy or mastectomy) in a hospital or by breast core biopsy in a physician’s office.

The Oncotype DX test does not require additional surgery. In either case, samples are sent to pathology labs, where they are fixed and put into wax in tumor blocks. These tumor blocks are examined by the local pathologist, who examines the tissue under the microscope and makes the diagnosis of breast cancer. These same tumor blocks are then sent via overnight shipment to Genomic Health’s Redwood City, Calif, laboratory for processing. As of May 2010, Genomic Health has received assays from more than 55 countries.

At Genomic Health, RNA is extracted from paraffin-embedded tumor samples and then analyzed to determine the level of activity or expression of each of 21 genes. The results of the analysis are then put into a mathematical equation to convert those measures into the Recurrence Score result. This result corresponds to the likelihood of breast cancer returning within 10 years of initial diagnosis (distant recurrence). The result also provides insight into the amount of benefit the breast cancer patient may receive from undergoing chemotherapy (commonly used drugs for early-stage breast cancer) in addition to hormonal therapy.

A prospective, multicenter, study published in the Journal of Clinical Oncology showed the information provided by the Oncotype DX Recurrence Score had a significant impact on breast cancer treatment decisions for early-stage breast cancer patients while increasing patient satisfaction and physician confidence in those decisions. The study found that knowledge of a patient’s Recurrence Score changed oncologists’ treatment recommendations in 31.5% of cases and changed 27% of breast cancer patients’ treatment decisions.

Another study, also published in the Journal of Clinical Oncology, demonstrated that the test, which quantifies the risk of distant recurrence for a large portion of early-stage breast cancer patients, also significantly predicts local or regional recurrence, which is when breast cancer returns to the same or nearby remaining organ or tissue.

Shak notes that publications from the American Society of Clinical Oncology and the National Comprehensive Cancer Network include the Oncotype DX assay in their guidelines for patients with node-negative breast cancer that is estrogen-receptor positive and/or progesterone-receptor positive. Randy Scott, Genomic Health founder and executive chairman, adds that Oncotype DX allows women to make more informed choices about breast cancer treatment. It’s costly, but results can counter-indicate the need for chemotherapy. In those cases, savings are substantial for the average patient, he says.

In the long term, Shak says, it might make sense to use other labs for the assay, but the process is very complicated, and Genomic Health wants to maintain the highest quality, which it does because of standardization and control. Its lab provides a 10- to 14-day turnaround, including for samples that come from overseas, because results can be provided instantaneously via e-mail, fax, or online.

He adds that although there are other tests, Oncotype DX is preferred and used predominately, for several reasons: its ability to work with paraffin-embedded tissue to deliver quality results; validation and reproducibility of results in 13 studies of more than 4,000 patients; the benefit of accurately determining whether chemotherapy is indicated for a patient; and because 90% of payors provide coverage for the assay. The company also provides a genomic test for stage II colon cancer recurrence. “Having the data this assay provides is like having a Hubble telescope for breast cancer,” Shak says.

According to Khaudeja Bano, medical director, diagnostics, Abbott Laboratories, Abbott Park, Ill, the company’s ARCHITECT HE4 (human epididymis protein 4)—the first automated HE4 test available in the United States—serves as an aid in monitoring for recurrence or progression in patients with epithelial ovarian cancer, the most common type of ovarian cancer. The assay was recently cleared by the FDA.

The two-step immunoassay detects HE4 in the blood. It works by using chemilumuniscent technology and measuring the Relative Light Units (RLUs) of the reaction in the sample. A direct relationship occurs between the amount of HE4 antigen in the sample and the RLUs detected by the ARCHITECT instrument, Bano says.

The current gold standard for ovarian cancer testing is CA125, Bano says. However, while 80% of ovarian cancers express CA125, 20% of all ovarian cancers do not. By using Abbott’s new HE4 test in conjunction with other clinical methods, including CA125, physicians can get a more comprehensive clinical picture when monitoring ovarian cancer patients.

A recent study evaluating nine biomarkers for their ability to improve the sensitivity of CA125 for prediction of the presence of ovarian cancer in women with a pelvic mass found that of the nine biomarkers investigated, HE4 had the highest sensitivity and specificity for detecting a malignancy, Bano notes.

Abbott has both molecular and in vitro diagnostic (IVD) tests. The IVD tests are primarily used for monitoring patients with various types of cancer, and include HE4 (ovarian cancer), 19-9xr (pancreatic cancer), AFP (testicular cancer), CEA (various cancers), CA 125 (ovarian cancer), and CA 15-3 (breast cancer). “We are always exploring the potential for additional utilities of our products to bring increased value to patients,” she says.