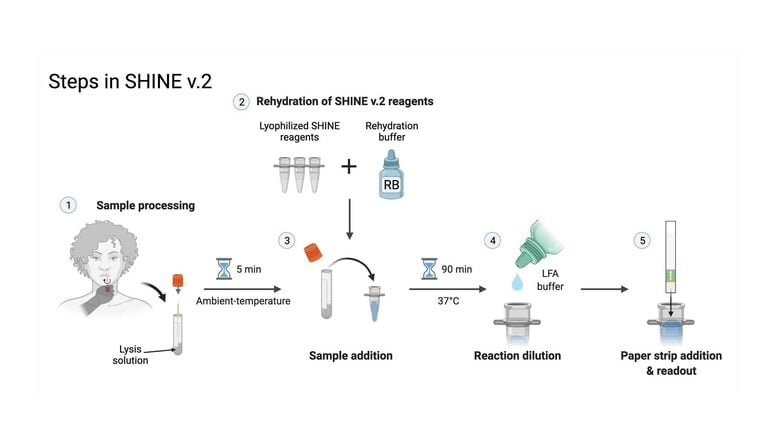 A team of researchers from Princeton University and the Broad Institute of MIT and Harvard have created an easy-to-use diagnostic test for COVID infection that is more sensitive than the commonly used at-home antigen tests, and that also allows for the rapid and specific detection of SARS-CoV-2 variants in point-of-care settings.

The study was published in the journal Nature Biomedical Engineering.

“Viral infections are often challenging to detect – as we all realized in the early days of the SARS-CoV-2 pandemic,” says Cameron Myhrvold, an assistant professor in the Department of Molecular Biology at Princeton.

The improved test detects virus using a different mechanism than the more familiar clinic-based PCR or at-home antigen tests. Instead, the test detects virus using a technology known as CRISPR, which has found widespread use in gene editing. CRISPR originated from a system used by bacteria to detect and defend against viral infections, and is uniquely suited to rapidly identifying specific genetic sequences.

Myhrvold previously worked with Broad Institute member and Harvard University professor Pardis Sabeti to develop a CRISPR-based test that could be tailored to diagnose specific viral infections. In the wake of the pandemic’s first wave in 2020, Myhrvold’s team of researchers modified their test, which they called SHINE, to detect SARS-CoV-2 with remarkable sensitivity.

“The original version of SHINE was more of a lab-based test,” says Myhrvold. “We wanted to make it possible to perform outside of a lab, with the ultimate goal of enabling people to self-test or test at home.”

Jon Arizti-Sanz, a graduate student in medical engineering in the joint Harvard-MIT Health Sciences and Technology department and whom Myhrvold is mentoring, spearheaded a collaborative effort between the two scientists’ research teams to improve SHINE. First, the group focused on eliminating the need for specialized equipment to prepare patient samples for testing. Next, they optimized the test so that its reagents don’t need to be kept in a freezer, which ensures that the test can be easily transported long distances.

They dubbed the improved test “SHINEv.2.” After confirming that the altered test worked well in their own laboratory, the group sent a test kit to a laboratory in Nigeria to see whether it could survive a long period in transit and still retain its accuracy and sensitivity. It did. But then a new challenge arose for the team to address.

“While we were working on SHINEv.2, new SARS-CoV-2 variants emerged, so we wanted to make tests for them,” says Myhrvold.

The team was able to quickly adapt SHINEv.2 to discern between infections mounted by the Alpha, Beta, Delta or Omicron COVID variants in patient samples, and say the test can be rapidly modified to pick up on any other variants that may arise.

“The data indicating this approach can be used to distinguish SARS-CoV-2 variants of concern by differential detection of genomic mutations could enable us to better prepare for the appearance of the next mutation,” says Tony Hu, director of the Center for Intelligent Molecular Diagnostics and Weatherhead Presidential Chair at Tulane University. Hu reviewed the manuscript for Nature Biomedical Engineering.

Because it tests for the different variants all at once, this version of the test needs one special, but relatively inexpensive, piece of equipment to read out its results. Nonetheless, SHINEv.2 is much faster to perform, and requires much less equipment and expertise, than current approaches used to identify SARS-CoV-2 variants. The team envisions that it would mainly be used at doctors’ offices, even ones with limited resources in remote locations, to help physicians determine which viral variant is afflicting their patient, and tailor therapies appropriately.

The team also wanted to create a version of their test that would be usable by people at home, which meant optimizing it so that it can be performed without any special equipment.

“We created a fully equipment-free version that can be performed by incubating the reaction using body heat—holding it in the underarm—or at room temperature,” says Myhrvold. “Our goal was to minimize the need for heating as much as possible.”

“The approach reported by authors could be a significant contribution for pandemic control by providing a method that requires minimal sample processing or heating,” Hu said.

The home test doesn’t discern between the different viral variants, but the minimal sample processing involved in this version of SHINEv.2 would be a boon to the home user—especially with a test that can accurately detect an infection with high sensitivity, picking up on cases that might be missed by other types of home tests. Myhrvold is optimistic that SHINEv.2 will soon be joining the front lines in the battle against SARS-CoV-2, and any other new pathogen that arises in the future.

Featured image: SHINEv.2 is a CRISPR-based diagnostic test for SARS-CoV-2 and its variants that can be performed with only five simple steps. Depicted is a version of SHINE v2 that reads out its results via a method similar to other viral home tests. Photo: Jon Arizti Sanz, Broad Institute of MIT and Harvard 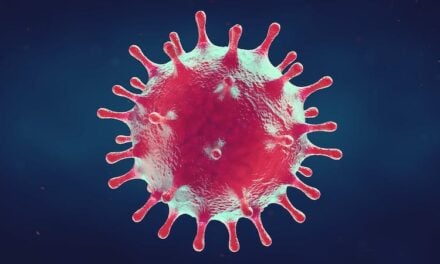 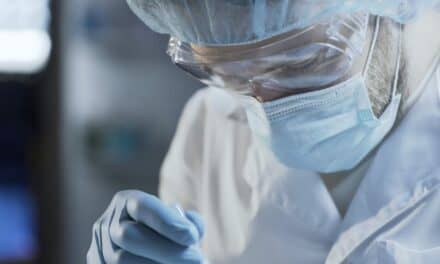 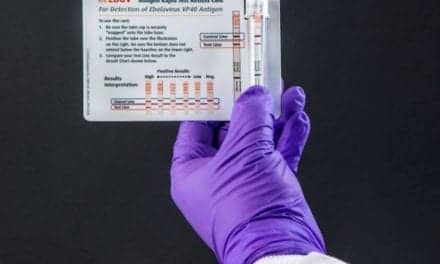